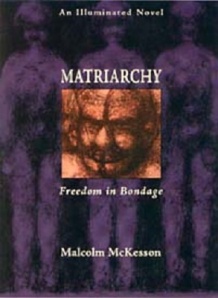 Personal History: And here we are at the penultimate entry in the series. Although this entry will be a perfect lead-in to the last entry, Lost Girls, by Alan Moore and Melinda Gebbie.

I have a distinct memory of me purchasing Matriarchy: Freedom in Bondage, by Malcolm McKesson at about the same time as Gynecocracy, by Viscount Ladywood. It has long been on my To Be Read pile. As an enthusiast of outsider art, I found this a fascinating addition to my analysis of the erotica genre.

The History: Malcolm McKesson’s autobiography provides thin gruel in terms of mining information. Tony Thorne, in the introduction, lays out a rough outline: “[A] fairly privileged background, hints of parental disapproval, a period as a businessman in the Twenties and Thirties, religious disillusion, service in the US army overseas.” Early in his life, he had a sister die. In the Postlude, McKesson also tells about a death of a brother in a motorcycle accident. During his sophomore year in college, he began to experiment with transvestism. His marriage with poet Madeline Mason involved him becoming a submissive in a sadomasochistic relationship.

This is the first book in The NSFW Files classified as Outsider Art. Here is Tony Thorne quoting Michel Thevoz on the definition of an Outsider Artist, “To reroute, develop, and elaborate – albeit with an adult’s capacity for concentration and perseverance impulses … springing directly from early childhood.” Much of Matriarchy‘s atmospherics hearken to children’s fairy tales.

At heart, Matriarchy is an autobiographical work, an attempt by McKesson to create a “fictionalized idealized and realized version of his lifetime struggle to define himself.” It is the product of long fermentation and distillation. Unlike Gynecocracy by Viscount Ladywood, it is not a prurient Victorian curio, but possesses a mythological aspect closer to Our Lady of the Flowers.

The Book: Matriarchy is the story of Gerald Graham in the year 1929. About to enter Harvard, he meets Gladys von Gunthardt on a ski trip. He is invited to her mansion on the West Side of Manhattan. He becomes her prisoner. During his confinement, he becomes Rose, a serving maid, dressing as such and getting training from Gladys’s maid, Sally.

As the novel progresses, Gerald’s relationship to Gladys intensifies. He begins as child to her mother, but Gladys becomes his Mistress, his Goddess, and then, finally, his wife. Gerald attains freedom when he is dressed as a serving maid and serving his Mistress with complete submission. Gerald doesn’t see this submission as a form of oppression, but as an exaltation of his true nature.

During his instruction and servitude, he gets captured by one of Gladys’s friends, but eventually returns. He passes the test for loyalty. He also has a run-in with the law for his curious attire and odd behavior. Later, he confronts his parents, and rescues his artistic-minded sister, Mary, bringing her to Gladys. One of the most powerful sequences is Gerald’s dream of The School for Pages. It is a lush yet disciplined and hierarchical world recalling Story of O‘s world.

While the writing is amateurish, its combination with the illustrations create something altogether different and marvelous. Thorne explains how the illustrations are populated with “voluptuous, anonymous, androgynous figures [that] seem to emerge from a soft muffling darkness.” McKesson freely switches from third to first person and from addressing Gerald/Rose with male and female pronouns. For those interested in the “performativity of gender” and the more fluid aspects of human sexuality, should read three books: Our Lady of the Flowers by Jean Genet; Wraeththu by Storm Constantine; and Matriarchy by Malcolm McKesson.

For a novel included in a series about erotica and pornography, Matriarchy had almost no sex. It wasn’t about sex, it was about secret rites and a very peculiar, very individualized kind of personal spirituality. This is a bondage novel, but I’d characterize it as a “dainty” bondage novel. No leather, just lace and ribbons and petits fours at high tea. (McKesson had a distaste for masculine fashions at the times.) And make no mistake, I’m linking the term “dainty” with a personal feminine exaltation. Akin to Jean Genet’s use of Catholicism and gutter pimp criminality to create an ornate and decadent world and making Divine a kind of holy figure. To use “dainty” is without its normal pejorative connotations.

McKesson creates a world combining narrative and illustration that has the visual softness of a Jean-Honore Fragonard painting with an atmosphere, simultaneously magical and menacing, of Grimms’ Fairy Tales. Gerald/Rose continually receives treatment that infantilize him, yet he is subject to many of the adult world’s pleasures and cruelties. The narrative and illustration work together in the same manner as William Blake’s poetry and drawings. Like a Blakean figure, Gerald has his masculine and feminine emanations.

The Verdict: Matriarchy was a marvelous reading experience. Its themes and subject matter bring to mind many of the previous entries in this series. It is autobiographical exorcism like Bataille’s Story of the Eye, but it is autobiography transfigured into personal mythology like Our Lady of the Flowers by Jean Genet. It shares the themes of transvestism and bondage with Our Lady of the Flowers (again) and Gynecocracy by Viscount Ladywood. The bondage themes are similar to Story of O and The Image, although with very little actual sex. Unlike Nobel Laureate Elfriede Jelinek or Roman-era gossip Petronius, Malcolm McKesson’s literary heritage as an outsider artist brings him closer to artistic eccentrics like William Blake and Matthew Barney.

My copy of Matriarchy was published by HECK Editions and woefully out of print. Luckily one can find reasonably priced softcovers online. HECK Editions was a publisher focusing on lowbrow artists like Joe Coleman and performance artists like Annie Sprinkle. It may be time to revive Matriarchy, since it can stand besides other erotica classics.

Matriarchy is weird, but in the best way possible.