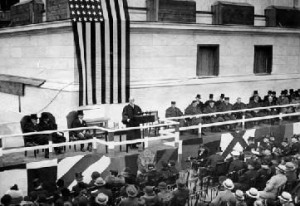 Besides the Supreme Court Building, Cass Gilbert also designed the Minnesota Capitol and the Woolworth Building, one of the oldest skyscrapers in the nation. Jeffrey Toobin, in his book, The Nine, details how the Supreme Court Building exemplified the grandeur and egalitarian nature of The Law. Its neoclassical design makes material the abstract concepts argued and interpreted by the justices, clerks, solicitors general, and lawyers who make their way before the highest court in the land. The steps emphasize that everyone who enter enter the same way. All are equal before the Law. Cass Gilbert’s steps are the 14th amendment made real. America has an unhealthy fondness for political dynasties, but one can be relieved that we don’t create special legislative measures insuring the privileges of the titled. There is no aristocracy in America, although there is plutocracy, oligarchy, and mobocracy aplenty, enough to raise the hackles of those Right and Left.

The Court interprets what the Law is. This is where things can get dicey, since Law, as evidenced by Supreme Court decisions, the decisions of lesser courts, legislation, and common cultural practice, has become an ever-changing thing. Is the Law:

If only things were that easy. The drama and danger imbued with the task of interpreting the Law belies the fact that it is impossible to distill the Law into an either/or proposition. In addition, the nine justices must interpret the Law for all. This is why Scalia and Thomas sit on the sidelines, penning extremist opinions, nostalgic for a theocratic capitalist utopia, swinging words with the futility of King Lear fighting the sea.

The Supreme Court is like a legislative body in microcosm. Instead of 535 Congressional Representatives and 100 Senators, there are only nine justices. Of late, the Court has been wracked by a series of 5-4 decisions. The last unanimous decision of import was Nixon v US. Unlike Brown, Nixon involved preserving institutional autonomy against an executive power grab. It wasn’t necessarily that Nixon would have attained dictatorial powers like the tinpot pro-US dictators we sponsored throughout the Cold War and after, although Nixon was no slouch, and it could have been possible. Nixon v US would have made the Court irrelevant and it would have ceded its accumulated institutional prestige earned from Marbury v Madison, the decision that established the Court’s power of judicial review. (With almost pointillist precision, The Brethren sheds light on the debates and interpretive frameworks surrounding Nixon v US. It broadens the picture established by All the President’s Men. One can also add to Years of Upheaval by Henry Kissinger to see Watergate from the foreign policy perspective.)

We return again to Cass Gilbert’s steps, this time blooded by the War on Terror and the very real threat to the buildings of the District of Columbia. As the Supreme Court website says on its “Plan Your Visit” page: “Visitors may enter the building from the Plaza doors located on each side of the main steps.”

Built and opened during the crucible of the Great Depression, the Supreme Court Building remains, albeit with new security measures. Cass Gilbert’s steps now lack the metaphorical and physical embodiment of egalitarianism and majesty. But, in its own way, the Supreme Court Building has us – citizens, voters, tourists – contemplate the meaning of the Law. For decades, the route of entry to the Supreme Court Building remained unchanged. Now recent events has changed the equation. Things change, and by turns, so the Law must also change. For the better or for the worse? As the old chestnut goes, “The only constant is change.” While that is true on a superficial level and bespeaks a certain bumper sticker logic, what does that mean in real terms? Today the Big Issues involve gay marriage, health care reform, wifi, and international terrorism. The Supreme Court interprets the Law with the real consequences in mind, at least in theory, in practice it doesn’t usually end up so nice and neat.

While the Supreme Court may seem like a distant star populated by intellectual obscurantists in lifetime appointments, it is reassuring that the Court members are both in touch and wildly out of touch with popular opinion. Why is this a good thing? Despite the measures taken to secure appointments, we, as citizens, do have a degree of control, however slight and oblique, in judicial selection. The President nominates the candidate and the Senate Judiciary Committee can consent to that nomination, but we elect both of them. (Whether our candidate actually wins is another kettle of fish.) Supreme Court vacancies don’t come along very often, but when they do, it is of especial importance to citizens who value their hard-fought freedoms. 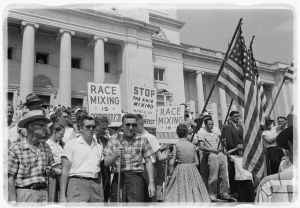 The hard-fought nature of these aforementioned freedoms relies on how these nine above-average jurists interpret the Law. The Court’s insulation from public opinion can be a good thing. Think of desegregation and popular opinion. Only long after Brown v Board did a majority of Americans find desegregation acceptable. On the other hand, the United States is creeping ever closer to universal acceptance of gay marriage. Unfortunately, the Court has several conservatives and ultraconservatives who put their archaic and ossified moral outlook ahead of marital desegregation. (Alas, they don’t see it in those terms.) But the Court can change. Who knows, perhaps a future President will nominate an openly gay Supreme Court nominee (or two) to the bench. The last election cycle brought forth Tammy Baldwin, an openly gay member of the Senate, a nice counterbalance to the closet-inhabiting senators seated on the opposite side of the aisle.

The Law will adapt to meet the needs of modern society, but if history is any indication, the Law will be dragged kicking and screaming as society attempts to lurch forward, held back by antiquated laws of no relevance. The occupants of the nine seats in Cass Gilbert’s neoclassical temple will either let freedom expand or confine it to the few. But before any of this change can happen, it has to make it to Cass Gilbert’s steps.

***NOTE: Mondays with the Supremes will continue in a more irregular fashion following these nine initial posts. I will post reviews on books pertaining to the Supreme Court.***

One thought on “Mondays with the Supremes: Part IX: Cass Gilbert’s Steps”