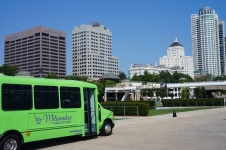 The Megapolitan Flâneur is a series of short travel essays. Neither chronology or inventory, the essays will be reflective, free associative, and impressionistic.

A couple weeks ago I had the opportunity to go on the Explore Milwaukee Hop On / Hop Off Sightseeing Bus. The Sightseeing Bus is part of Milwaukee Food Tours, a collection of several walking and bus tours. Starting in 2009 by a married couple – she loves Milwaukee, he was a foodie  – with only one tour, the company has blossomed into a multifaceted organization.

While I grew up in Wauwatosa, a Milwaukee suburb, I have not been back to Milwaukee in over eight years. After relocating for my wife’s work, I wanted to see what was the same, what changed, and the history behind places I drove past everyday.

I was picked up at the Milwaukee Hilton Hotel, a magnificent grand hotel decorated in the Second Empire style, and rode in the Milwaukee Food Tour’s iconic green bus. The short-length bus was equipped with comfortable seats and large windows. During my trips to Chicago for The Chicago Center for Literature and Photography, one of the best aspects of the city was my not needing to drive. I hopped an El or walked around.

The Sightseeing Bus has two main functions: as a site for mobile education and as a convenient transport to and from specific locations. The Bus’s smaller size made it easy to hear the tour guide, seated at the front. He didn’t need to use a microphone or even raise his voice. In between rehearsed monologues about the numerous landmarks, other riders and I conversed with him.

After picking up all the passengers at the four designated pick-up points, the Bus traveled around Greater Downtown Milwaukee. We saw The Milwaukee Art Museum, the Harley-Davidson Museum, the Northwestern Mutual Life building, the former site of Solomon Juneau’s log cabin, and the Bradley Center. The Bus drove through Walker’s Point, The Third Ward, Brady Street, and Old World 3rd Street. 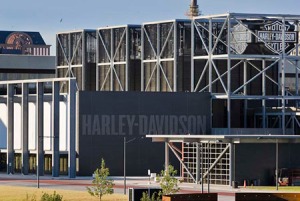 One pair of megapolitan flâneurs from Chicago were dropped off at the Harley-Davidson Museum. Among the many high-quality museums in the city, the Harley-Davidson Museum was designed to look like a factory. Along with Northwestern Mutual Life, Harley-Davidson is another Fortune 500 company. The blocky metallic design stands in stark contrast to The Milwaukee Art Museum and the Quadracci Pavilion designed by world renown architect Santiago Calatrava. Calatrava’s brise soleil is an engineering marvel, marrying the architectural with the organic. When one sees the wings unfolding, it seems like the MAM is a living entity.

From the biomechanical beauty of the brise soleil to the inventive re-use of pre-existing space, Milwaukee is a city of museums. The Milwaukee County Historical Society took over the space formerly occupied by a bank. It lends the subject matter (the history of Milwaukee County) an understated grandeur and a stony gravitas. Unlike other buildings of the era, MCHS’s building is only a couple stories high.

A great feature of Milwaukee’s skyline is the variety of old and new forms. The Second Empire splendor of the Northwestern Mutual Life building stands amid newer skyscrapers. On a more domestic level, the tour guide pointed out Milwaukee’s own contribution to architecture: the Polish flat. The Poles, a subset of immigrants in a city of immigrants, would buy a house and rent the upper floor to boarders. 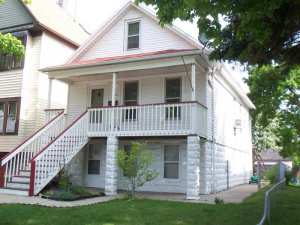 The Bus acted like a mobile educational center due to the tour guide’s self-professed status as a “local history nerd.” During the hour-long tour, individual stories and anecdotes melded into a larger narrative. Areas like The Third Ward and Brady Street used to be no-go zones, places so crime-ridden even the cops wouldn’t patrol there. Today they are gentrified, albeit each with its own idiosyncrasies and histories. Brady Street has bars and boutique shops as well as Glorioso’s Italian Deli and Peter Sciortino’s Bakery.

Brady Street’s Italian immigrant history is contrasted by Old World 3rd Street establishments like Usinger Sausage, Mader’s Restaurant, and The Wisconsin Cheese Mart. The architecture is reminiscent of medieval walled cities in Germany and half-timbered houses from the time of Shakespeare. A little kitschy? Maybe? But the foods and beverages housed within those establishments have unbroken roots back all the way back to Germany. (Although Germany only became Germany in 1871. Prior to that, the central European nation-state had existed as a collection of small states and provinces.)

Milwaukee’s history is a confluence of geography, immigrant communities, and global events. Until the First World War, Milwaukee had seven daily newspapers, at least four in German. The odd angle of bridges was due to the Bridge War of Byron Kilbourn and George Walker. Before Milwaukee became a city, it was three cities.

For all of Milwaukee’s peculiar street arrangements, it doesn’t hold a candle to The Twin Cities in Minnesota. In that case, Minneapolis and St. Paul abut the Mississippi River, but are also situated in two different counties. Navigating those streets is anything but easy. Thankfully there is GPS. (Although for all my time in Minnesota, trips to the Twin Cities were always enjoyable. Like Milwaukee, it is a Midwestern city with an embarrassment of riches to offer tourists and longtime residents.)

I’m a longtime resident of Milwaukee County. I grew up in the suburbs and have spent some years in southeastern Minnesota. The Sightseeing Bus offered an educational homecoming of sorts. The local history I was taught had since faded into blurry recollection and half-remembered tall tales. The tour offered a deft combination of the uplifting, informative, and salacious. For every story about local can-do industriousness, there was the story of Water Street’s raunchy reputation. According to the tour guide, Water Street was like Las Vegas and Bangkok combined. Tourists would get a “sporting guide,” a reference manual to all the notable bars, brothels, and gambling dens. Unlike Chicago, it wasn’t kickback city. In another tale, we learned about the grisly origin of Farwell Avenue that included real estate swindling, whiskey, and murder. You’ll never look at whiskey barrels the same way again.

Learning about history has never been about propriety, industriousness, and good behavior. Sometimes one seeks out the more prurient aspects of human conduct. It definitely made The Sightseeing Bus that much more entertaining.

Whether you are a tourist visiting Cream City or a lifelong resident, check out The Sightseeing Bus from Milwaukee Food Tours. It is a solid hour of education and entertainment. It provides a thumbnail sketch of Milwaukee’s storied history, from Solomon Juneau’s log cabin to the Bradley Center and beyond. You can hop on or hop off at designated spots and you’ll get picked up at predetermined times.

When you want to wander the Cream City, this is the way to do it. Highly recommended.