In addition to the general book reviews, I wrote a series of essays on the theme of what it means to be human.  These essays, including several bonus essays, on sale now at Amazon.com

Praise for On Being Human:

“His book does what criticism does at its best: not only raising important questions and suggesting new avenues of exploration but introducing readers to ideas and works new to them, or encouraging readers to revisit and understand them in new ways….[A] welcome addition to the literature on the topic of what it means to be human in a potentially posthuman age.” — Christopher Bernard, author of A Spy in the Ruins, writing in Synchronized Chaos. 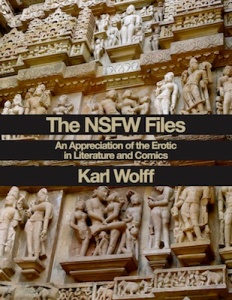 The runaway success of Fifty Shades of Grey made erotica mainstream, but can erotica really be written off as derivative fiction read by suburban moms for titillation? As Karl Wolff investigates in his new collection of essays, erotica belongs in a vast literary landscape, a genre that hides hidden treasures and rare delights. He covers erotica from The Song of Songs to Nic Kelman’s girls: A Paean; from Gynecocracy to Matriarchy: Freedom in Bondage; from City of Night to Naked Lunch; Story of the Eye to Story of O; and a bawdy bouquet of graphic novels. The NSFW Files includes essays on erotica written by a Nobel laureate, an outsider artist, a surrealist, and a French prisoner, among many more. Most important, the essay collection offers an answer to the question, “What dirty book should I read next?”

Praise for The NSFW Files:

“To read The NSFW Files is to be in the presence of an engaging intelligence. Wolff is an intellectual without trendy baggage. He has a refreshing style. He sounds like the sort of person you could have a very good conversation with in a bar or a coffee shop.” — Roxy Katt, erotica author

The NSFW Files is available for free on Academia.edu.

My unpublished book of essays, American Odd, is also up on Academia.edu. It examines the interrelated phenomena of roadside attractions, the literary avant-garde, and conspiracy theories. If and when I decide to submit it to a publisher, it will more than likely exist in a different than this free PDF version. I wrote the conclusion to the essay collection in 2018. Suffice to say, the opinions and sentiments voiced therein can be best seen as a historical snapshot of the time I wrote it. A lot has happend since — the Pandemic, the January 6th Insurrection, the rise of QAnon, etc. — so I decided to upload this version and classify it as a “Final Manuscript” only in the most transitory sense. It is finished … for now.