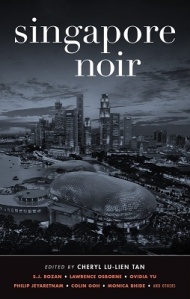 Singapore is a small city-state and island in Southeast Asia. Malaysia borders it to the north and Indonesia to the south. It had been a British colony and Japanese occupation followed during the Second World War. The postwar socioeconomic scene included rapid industrialization and authoritarian rule. Singapore came into the headlines for the US during the caning fracas of Michael Fay in 1994. And in an magazine article, author William Gibson described Singapore as “Disneyland with the death penalty.” How can one write compelling noir stories in a city-state that is authoritarian, industrious, workaholic, and clean? That is the challenge for Cheryl Lu-Lien Tan, editor of Akashic’s latest in their long-running Noir series, Singapore Noir. Just as the cuisine of Singapore is a melange of traditional Malay and imported Chinese, Indian, Japanese, and British tastes, so one sees in the international criminal class. It is a nation of contradictions and violence, where prostitution is legal but not spitting on the pavement. There are corrupt Party bosses from the People’s Republic of China, Chinese triads, Japanese yakuza, and the errant Russian mafiya kingpin.

This is the third Noir anthology and, as usual, I’m impressed by its selection of authors. The Akashic Noir series is also a great way to educate yourself on the noir genre. On a basic level, noir is about gumshoes and heavies, femme fatales and dames with gams that go on forever. But noir is also about dreams and desires. “Mother,” by Monica Bhide, is about Eddie and his mother, a washerwoman at a school. Without spoiling the plot, the story is about Eddie’s desperate fight with his own personal demons and living with the wrong, albeit well-intentioned, decision he made.

“The Strangler Fig” by Philip Jeyaretnam is a darkly poetic meditation on self-delusion and living up to everyone’s expectations. Bernard grew up being a good student and a model husband to his wife Evelyn, but her constant demands on Bernard turn her into a Lady Macbeth-type. He becomes a minister in the Singapore government, but finds himself happier when his party isn’t in power. He has an affair with a woman he meets on the campaign and thinks a divorce will be a painless affair. But then he realizes he’s been betrayed and blackmailed by this woman. Throughout his life, he sought to avoid getting strangled, seeing the strangler fig, a parasitic tree that slowly kills the host.

Cheryl Lu-Lien Tan’s “Reel” tells a story in Singapore’s unique patois, Singlish. It is the story of Ah Meng’s desperate attempt to find love, or at least some casual sex. Ah Meng works on a kelong, a kind of fishing shack of stilts. When he befriends two young girls, he thinks he will have a fun afternoon. “If he wanted to see chio girls he usually had to take the bus to the Bedok town center. If he felt in the mood for atas girls then go Clarke Quay where the high-class clubs were, lah.” Unlike the other stories where the protagonist gets killed, “Reel” leaves no explanation. The violence is random, bloody, and ambiguous. He didn’t piss off a mob boss or a money-laundering Communist Party member. And the only dialogue the girls speak to each other regarding the murder makes it sound like an initiation of sorts. The conclusion remains murky and primordial.

Singapore Noir is another fine addition to the Akashic’s Noir series. Under Cheryl Lu-Lien Tan’s tutelage, the stories puncture the stereotypes associated with Singapore and push the genre in new directions.

To get the feel and flavor for this hyper-capitalist multie-ethnic authoritarian city-state, check out these clips from Anthony Bourdain’s visit from No Reservations.

And here’s a clip on how to make the famous Singapore Sling: