Published in 1929, Tyrant Banderas, by Ramón del Valle-Inclán is a scabrous satire about the fictional Latin American dictatorship of Sante Fe de Tierra Firme. The combination of cubist perspective and campy excess represents a unique creation in Spanish literary modernism. Ruling his nation from the former monastery of Saint-Martin of the Monstenses, President Don Santos Banderas (aka Kid Santos, aka Tyrant Banderas) has to deal with an armed revolt. To add to the phantasmorgic atmosphere of the novel, the action takes place around the Day of the Dead, the political violence colliding with the carnivalesque.

Expertly translated by Peter Bush, the novel flows with a crazy energy, at once demotic, slangy, and lowbrow, combined with high-brow posturing from the military and political elites. As Alberto Manguel mentions in his introduction, the Spanish language versions of Tyrant Banderas usually come with an extensive glossary. Bush has done such a great job in translation that none is required, the various sub-cultural slang and street argot rendered into an easily understandable English that still captures the essence of the Spanish original.

Before proceeding, it is worth exploring the biography of Valle-Inclán. It is a political and literary career as strange as his fictional creations. In 1910, he ran for the Cortes, the people’s chamber, having “conservative aristocratic sympathies.” After losing, he switched sides – also losing – this time as a leftist. Besides his leftist affiliations, he adopted Theosophy, a spiritualist philosophy that permeates Tyrant Banderas‘s narrative structure. Like one of his characters, Del Valle-Inclán had a “spindly frame, cutting wit, long hair, longer beard, black cape, and a single arm (the other having been lost after a fight with a critic).” Like Roberto Bolaño, Del Valle-Inclán was born in Spain but ended up in Mexico. His exile and disillusionment with the dictatorships of Mexico and Spain shaped Del Valle-Inclán’s fiction, which he called esperpentos, meaning “grotesque and horrible things.”

The novel exhibits a delicate balance between finely calibrated artifice and barely controlled chaos. The fragmentary nature belies Del Valle-Inclán’s Theosophical arrangement, the book and chapter numbers possessing a remarkable narrative and structural symmetry. The novel is arranged in seven parts, including a prologue and epilogue, each part containing three books, except for “Book Four: A Necromantic Amulet,” that contains seven books.

The prose is violent, decadent, and hallucinatory. As if from a Grimm fairytale, the reader hears about the sharks swimming around the Santa Mónica jail, bloated and bored from eating too much flesh of the prisoners being executed. The jail is introduced, “Ghastly legends of poisoned water, of snake-ridden dungeons, torturers’ chains, racks, and hooks swathed the Fortress of Santa Mónica, home to countless political prisoners during revolutionary struggles.” The prose exhibits both a breathless melodramatic quality and is an inventory of garish images. In other chapters, the reader gets images reminiscent of a montage in film, itself a groundbreaking technique in the early history of cinema. 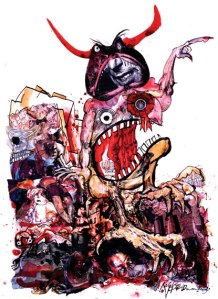 On the other end of the spectrum, there is the description of the Spanish Ambassador:

With a high brow stuffed with licentious fantasies, the Baron of Benicarlés, radiated a morbid romanticism, like the vicereine gazing at her own features in her garden mirror. His Excellency Don Mariano Isabel Cristino Queralt y Roca de Togores, Baron de Benicarlés and Master Chevalier of Ronda, chattered like an old spinster and pranced like a prima donna. Bleary eyed, stout, witless, and prattling, he exuded a saccharine sweetness. His hands and throats dripped flab; he parleyed with a French nasal twang; and his fleshy eyelids harbored gelid fantasies from perverse literature. He was a threadbare stuffed shirt, a literary snob, a dabbler in decadent salons redolent with the rites and catechisms of French poetasters.

Tyrant Banderas is a wonderful addition to the growing literature of Latin American dictatorships. This early example, combining cinematic montage effects with scathing satire and surrealistic imagery, is a novel that confronts the ugliness of tyranny run amok but is also fun to read. The melodrama, the action, and the characters offer the reader a classic novel that is both accessible and entertaining. Too often literary experimentalism gets accolades despite its incomprehensible and impenetrable delivery (see The Cantos by Ezra Pound or the later works of Samuel Beckett). But this reflects the prejudices of the critic more than the worth of the artistic product. With Tyrant Banderas, one could even go so far as recommending it to readers with more mainstream preferences. The novel is remarkable for its excellent translation, capturing the vibrancy and violence of Del Valle-Inclán’s language, and its easy accessibility for readers who dislike the term “literary” thrown in their direction. Cowboys, prostitutes, dictators, the Day of the Dead, sharks! There’s no excuse not to enjoy that Whitman’s Sampler of hallucinatory chaos. 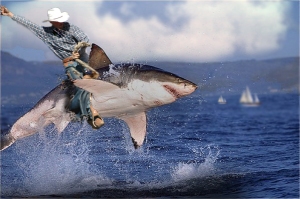