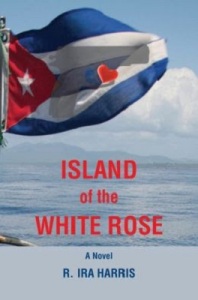 Beginning with a yacht race, Island of the White Rose by R. Ira Harris, examines the lives of everyday Cubans seeing their revolutionary ideals curdle before their eyes. It begins with the yacht race taking place at Havana’s elite yacht club. So elite (meaning “whites only”) that Cuba’s dictator can’t even join because of his mixed blood. Piloting the White Rose, named after the poem by Cuban poet and national hero Jose Marti, is Father Pedro Villanueva. Pedro comes from a wealthy elite family. His father is a doctor and his brother, Alberto, is a lawyer. After Pedro takes second place in the yacht race, he enjoys a few drinks inside the Havana Yacht Club. During this time, he lusts after the beautiful Dolores Barre, wife of a United Fruit Company lawyer. He also witnesses the police brutally beat a busboy on allegations of anti-government activities. When not falling prey to desires of the flesh, Pedro acts as parish priest at Iglesia del Espiritu Santo, going about the motions to a nearly empty church. He also contends with a fellow priest, his former mentor, the Falstaffian Domingo.

After witnessing the dire conditions inside La Cabana prison, he gives the unlucky busboy last rites. Pedro rapidly loses his faith, complaining to Domingo that the Church should really do something about Batista’s corruption and police brutality. Revolutionary fervor rapidly replaces his lost faith. He becomes interested in the activities of his former schoolmate, one Fidel Castro. He joins a secret revolutionary cell and becomes entranced with a government accountant named Maria Guerra. One of Maria’s prime tasks is to investigate the corruption in Batista’s state-operated casinos. Suffice to say, there’s lots of corruption.

Unfortunately for all, except the fanatical Dolores Barre, who runs the clandestine cell, Pedro and Maria begin to see the cracks in the idealism of Castro’s political revolution. This alone makes the novel refreshing. Despite his entreaties to Dolores, Pedro is forced to continue being a priest, now in his church with full pews. With crackdowns, promises of an election that will never happen, and the clandestine cell mutating into a secret informant ring, Pedro has to make some tough choices.

The novel shows Cuba at a pivotal point in history. The transition from Batista’s dictatorship to Castro’s dictatorship. While Batista’s puppet regime was friendly to the United States, Castro’s regime showed the same disregard for individual rights. Each made a sham of democracy. But this wasn’t the first time this happened in Cuba. Batista overthrew the previous president, Carlos Prio Socarres. Throughout its long history, Cuba has dealt with Spanish colonialism, US intervention, and political instability. Cuba’s exchange of one dictatorship for another mirrors what happened in Iran and the uncertain future of Egypt. The challenge remains how nations unschooled in participatory democracy can peacefully hand off power between regimes.

Harris’s novel provided an enjoyable read. Except for a few hiccups where Pedro’s father sounds more English than Cuban, the novel is a rousing success. It is a novel about harsh practicalities that run headlong into political idealism. Without the pious hand-wringing of a Graham Greene novel, Island of the White Rose is infused with Greene’s trademark cocktail of political intrigue, human desire, and tortured compromises. Like a beach read with added moral heft, recommended for those wanting to read a historical novel with plenty of adventure and lived-in characters.