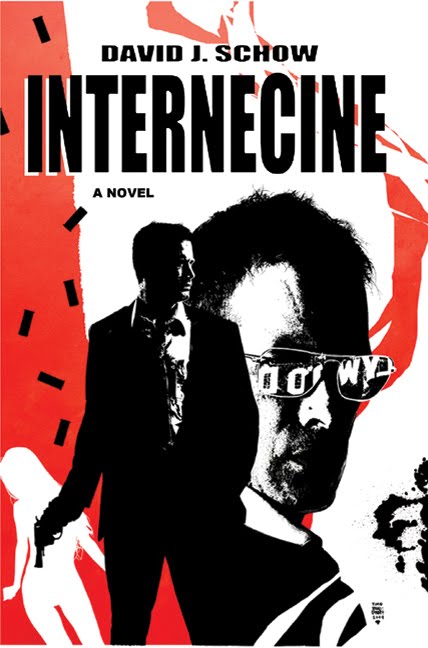 Conrad Maddox is the Vice President in charge of development for Kroeger Concepts, Ltd. He’s an ad man who specializes in selling our dreams and desires back to us a steep price. On his return from a business trip, he discovered a key in his rental car. The key belonged to a locker that contained a Halliburton-style briefcase. The briefcase contained fake IDs, cash, a cell phone and several guns. Conrad calls the number on the cell phone. As they say, hilarity ensues.

Internecine is a thriller written by David J. Schow. Schow is the Hollywood scribe who wrote Critters 3, Critters 4, and the Crow. Schow creates a propulsive thriller that takes the reader on a journey filled with shoot-outs, car chases, and shadowy cabals. Imagine Don Draper from Mad Men shoved into the Seventies paranoia funhouse world of The Parallax View. Now imagine it with jokes and observations about society that drip with cynicism and snark.

After nearly getting killed by a female assassin, Conrad is rescued by a mysterious man named Dandine. Dandine tells Conrad he has found himself in the middle of a secret war involving an organization called Norco. Conrad meets Dandine’s sidekick, the hacker/motorhead/Doc Savage aficionado Declan Morris Zetts. This unlikely trio maneuver through a plot filled with double-crosses, blind alleys, red herrings, and labyrinthine conspiracies. At root of the plot is the contest to win the California governorship. Since Kroeger Concepts and Conrad Maddox act as political consultants for one of the candidates, Conrad finds himself drawn into a shadowy realm beneath the glam and glitter of Los Angeles. One has to remember the ambitious Quaker Richard Nixon lived only a few miles from the Hollywood sign.

Internecine is a thriller and operates well as such. Beneath the trappings of action and heroism is a deep lacerating satire of modern society. Like Fight Club, Schow throws in darkly comical bon mots and witty observances that pull back the curtain on our vicious civilization. “People love venomless risk. The saccharine danger of amusement park rides and the catharsis of fiction. The torpor of narcotics and the exercise of loveless sex.” Maddox also thinks, “Our whole culture is built on the sand of excuses, excuses.” Not the usual witty one-liners one expects in a thriller. This black ice cynicism, not necessarily inaccurate, one would expect in the novel of Louis-Ferdinand Céline or in an Andrew Vachss novel. In addition to these little barbs, Schow writes snappy, razor-sharp dialogue, infectious as anything from Elmore Leonard or Quentin Tarantino. Schow continues the great tradition of inserting revolutionary social commentary into disreputable genre fare. Just watch some B-movies or anything released by the venerable schlockmeisters at Troma.

“Internecine” is a fun, darkly comedic action thriller. To call it “edgy” would be something you, dear reader, would expect. Then I’d be just another reviewer shilling a book to a sleepwalking populace distracted by shiny products, ignoring its own demise. Conrad Maddox would be proud.