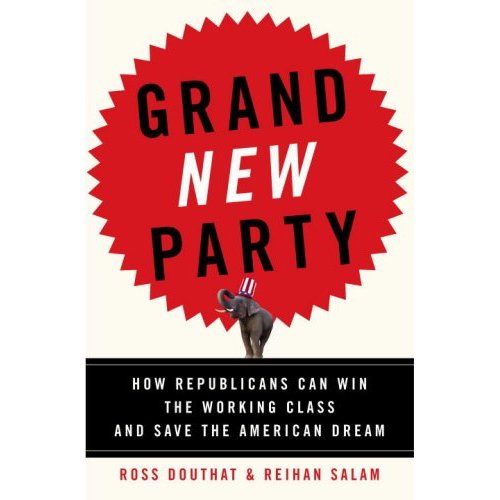 The United States has a lot of problems. On occasion, someone might have a bright idea on how to solve those problems. The book asserting it can fix all America’s problems is Grand New Party: How Republicans can win the working class and save the American Dream by Ross Douthat and Reihan Salam. The main idea of Grand New Party is for the GOP to offer an agenda that would help a pan-ethnic working class.

Unfortunately, it seems that the people most in need of reading this book have not done so. Arizona attempted to solve its immigration problem in the most nativist way possible, alienating the emergent Latin American cohort. Republicans in Congress are defending the ecocidal terrorism and corporate incompetence of British Petroleum, meanwhile blaming regulation as the culprit. (As if the United States political system has had no relationship with Big Oil.) Meanwhile the Family Values ethos wanes amidst the sexual hypocrisy of George Rekers, Ted Haggard, Mark Foley, and Michael Steele. Clearly, the GOP is in need of some serious ideological triage. Then again, when the car’s totaled, you aren’t going to waste your time debating trim color.

The book was a concise history of modern conservatism’s failures and both tactical and strategic solutions to those failures. The title suggests the solutions lie with the working class (read: non-college—educated) and given the pithy name “Sam’s Club voters.” This is classic conservative damage control, offering a plainspoken wake-up call to those fed up with government bureaucracy, corporate malfeasance, and moral decline. The solutions to these problems that range from tax reform to solutions that are more radical stem from a libertarian ethos. Self-reliance is a term that gets bandied about a lot, stemming from a frontier mythos and macho posturing.

Douthat and Salam stand out from other conservative voices in their defense of the New Deal and reassessing the Reagan Revolution in more rational light. These two are not cut from the same cloth as frothing lunatic Glenn Beck or mealy-mouthed racist Rand Paul. Unlike many of their ideological peers, they have their eyes on the future, not some mythologized vision of the Fifties where America was white, straight, and Protestant. Those days are gone.

While this reviewer does not subscribe to their political ideology, some of their solutions did offer innovation. They praised the New Deal in the sense that it saved capitalism from itself. They also favored tax-breaks for young families raising children. They also did not consider gay marriage to be a virus that will end Western Civilization. It’s good to see smart conservatives arguing with clear heads. Amidst the Tea Party hysteria, Rand Paul’s racist bleats, and politicians blathering on about “the Real America” (whatever that is? Clearly not New York City or Washington, D.C.), movement conservatives could learn a thing or two in their exile in the wilderness. That is unless they want to reside there permanently. Permanent exile fits a party whose pose is one of perpetual persecution. Conservatives adopted this pose even when they controlled all branches of government and had polls favoring them. No one likes whiners, least of all conservatives. So stop bawling, read this book, and start offering alternatives.

The libertarian ethos of the book falls short when they defend a market-friendly health care system. While they admit the United States definitely has a health care problem and it is financially detrimental to the working class, their solution does not hold up. Amidst calls for more intelligent consumer decisions and the evils of socialized health care, it implies that shopping for health care is like any other economic activity. One the one hand they condemn government health care because of rationing, then tell consumers that they should avoid wasteful health care decisions. Maybe they have better success telling working class parents whose children have chronic ailments. While the American health care system is in dire of radical reform, should the free market even apply to this sector of society? Should we exchange our government police and fire departments for market-friendly mercenaries?

The market is good in that it offers choices to consumers, although, ironically, not in politics. In that case, the consumer gets two choices and they are both rather dismal. No wonder the majority of the population chooses not to vote. The market has its uses, but it is neither a panacea nor a pagan idol. Other essential aspects of running a country should not be market based, since the profit motive could affect the commitment to the public good.

The book does have its drawbacks. The first is that a book purporting to advocate the working class is not written to the working class. The political commissars of the GOP are the intended audience. The other drawback is the relatively minimal attention on foreign affairs. While global capital and the “global labor glut” get attention, military and diplomatic matters get short shrift. In a global age, domestic and foreign affairs are inextricably linked. Our energy policy directly affects our foreign policy. The United States needs to reassess our foreign policy for ethical and economic reasons, questioning our longstanding relationships with dictators and despots. Is cheap oil worth supporting nations with awful human rights records? The same goes for Sam’s Club and other big boxes that purchase goods from the People’s Republic of China, a one-party dictatorship but also given the Most Favored Nation trade status by the United States. Do these foreign relations hold true to conservative ideology? On the other hand, is everything fine so long as the goods are cheap?

In the end, the book offers a reader inventive solutions to both the short-term and long-term. Whether this will result in the working class achieving the American Dream remains debatable. One final thought readers should keep in mind. The reason these books exist and get published is in the hope that the Party will get elected and achieve a majority. The movie Trading Places (1983, John Landis) has Eddie Murphy get lectured by Ralph Bellamy and Don Ameche about how commodities trading works. Following the lecture, Murphy says, “Sounds to me like you guys a couple of bookies.” Douthat and Salam are another couple of bookies, except they don’t trade in commodities but in votes. They hope that adding the working class vote to the GOP side, along with the other standard constituencies, will result in a new GOP majority. To anyone reading this book: Caveat Emptor. To any working class voter reading this book: Don’t give away your vote lightly. Both parties only want your vote. Once that is achieved, they get back to the business of government. These days that means personal enrichment and buying expensive gifts for their trophy wife. 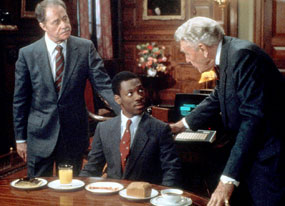 “Sounds to me like you guys a couple of bookies.” — Billy Ray Valentine