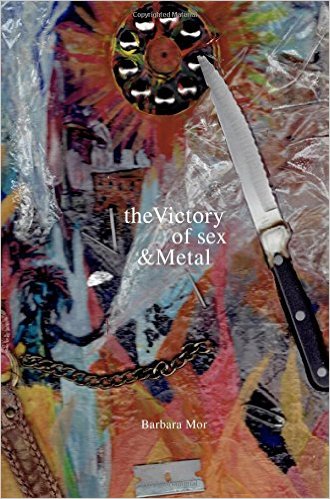 “Six days later Dean was killed in an auto accident on his way to Salinas, giving rise to one of Hollywood’s greatest myths, and Mor was left at the beginning of a life disarticulating the “nauseous allegories” of America, picking apart the bleeding flesh and conflagrations that underlie our national fanfare.” – Edgar Garcia on The Blue Rental

Erudite, angry, chthonic, volcanic – the poetry of Barbara Mor (October 3, 1936 — January 24, 2015) erupts from the page, burning like a supernova, witnessing the underbelly of an American empire gone to seed, her cries into the void like King Lear shouting at the sea.  The release of the Victory of sex & Metal (The Oliver Arts & Open Press) represents the most significant voice in American poetry.  Mor embodied everything the United States worked hard to exclude, despite the constant incantations about equality, opportunity, and hard work.  Mor existed on the fringes of society, her biography a litany of personal pain, disaster, and humiliation.  She wrote a critically-acclaimed work of feminist scholarship, yet could barely get a mop job at the same university.  Beyond the academic tome, she put out two slim volumes of poetry.  (The first being The Blue Rental.)

the Victory of sex & Metal is a continuation (of sorts) to The Blue Rental.  Mor works against the grain of contemporary poetry.  This slim volume the opposite of the delicate, sensitive, yet emotionally inert tone of modern academic poetry.  Her voice is angry, but also very, very smart.  She mixes together personal confession with history, mythology, and geology.  Scenes abruptly change from her observations on a city bus to discussing Norse mythology to looking back millions of years ago to ancient landscapes and charismatic megafauna.  She is political, but not a narrow-gauge partisan.  Her style is an idiosyncratic admixture of Ezra Pound, David Lynch, and Crazy Cat Lady.  It is the American Master Narrative as re-imagined by Hieronymus Bosch.  Being at the bottom of the socioeconomic food chain, she feels no need to pull her punches or obey the unspoken rituals and shibboleths of the middle-class.  Not everyone will like what she has to say.  But no one liked what Cassandra said either.

The poem’s narrative follows the adventures and misadventures of Knife Boy and Mechanical Girl.  Mor’s hyper-caffeinated poetry approaches a kind of mysticism one sees in outsider art:

At first blush, the poetry seems amateurish, the misspelling, the sentence fragments, and the unfocused imagery.  (Hence the previous insinuation about Mor’s style as Crazy Cat Lady.)  The Crazy Cat Lady is a pop culture archetype, but also can be a neighbor, a fellow citizen, we would prefer not to think about.  The insanity (however defined), the loneliness, and sharing domestic space with a horde of half-feral cats aren’t characteristics that make the thinkpiece-reading populace comfortable.  Mor makes us uncomfortable and that’s her value.  Modern conversation has taken the word “problematic” and used it as a shorthand, either to short-circuit a conversation (“Your views are problematic.”) or miss the point entirely (yourfaveisproblematic still hasn’t figured out what satire is).

The above passage smashes together a casual racism (black guy jonesing for sex) and a depressing setting (hanging around in Carl Jr’s or Burger King drinking coffee all night).  Her depiction of African-Americans is problematic.  So, what are you going to do about it?  No, seriously.  Barbara Mor charged poetry pokes the sternum of the armchair Social Justice Warrior.  Because she lacks any kind of practical power or socioeconomic clout, she is hyper-sensitive to everyday injustices.  In an interview with Adam Engel at the end of the book, she hits the nail on the head:

A generation of earnest young politicians was educated to think you can solve a problem by correctly labeling it: Thats racist!  Thats sexist!  Thats religiously intolerant!

Mor wants to get down to the root.  The Left remains adept at constructing linguistic edifices and cataloging injustices.  But this becomes fatuous window-dressing because of discomfort and unease when it comes to acquiring power.  Social justice can only be implemented when your guys are in power.  The Tea Party gets it.  Trump supporters get it.  Bernie Sanders supporters get it.  Why doesn’t Occupy Wall Street get it?  The recent flap about Madeleine Albright’s dingbat statement about women supporting Bernie Sanders is the latest example of the Left losing sight of The Big Picture.  Distasteful as this sounds, justice can only occur through the acquisition of POWER.  Without real POWER, you’re wasting your time.

Mor was attuned to the fact that America is no longer an empire.  Look at the infrastructure, the school system, and the unmitigated disaster that we call a healthcare system.  She understood the consequences of genuflecting towards the idols of “No new taxes” and the Right’s perverted melding of Church and State.  While occupying the Far Left of the political dial, Mor understood the Hobbesian, Social Darwinist realities of this neoliberal capitalist hellscape.  She saw everyday what those on both the Left and Right chose to ignore, downplay, or euphemize away.  Or as Mor says,

Mor is the prick of conscience that we wish would go away.  The images haunt us with their David Lynch-esque dreaminess, teetering between cheeseball Americana and surreal nightmare.

Her poetry is ferocious, disturbing, alienating, typographically eccentric, and angry.  She recalls a time when Poetry was a fist.  With mass shootings, crumbling streets, and corporations “moving to Ireland” (for tax purposes), perhaps it is high time to confront the problems of this hollowed-out empire with fists and fury.  Mor’s nauseous allegories of empire deserve an answer.

2 thoughts on “Critical Appraisals: Nauseating Allegories of Empire: the Victory of sex & Metal by Barbara Mor”