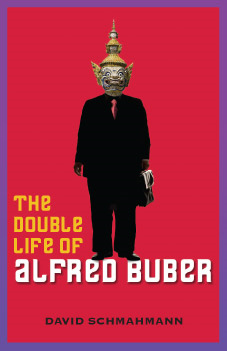 KUMAR(to Goldstein)Well, if you have the yellow fever tonight, there’s a rocking Asian party over at Princeton tonight.

GOLDSTEIN Man, I have the yellow plague. There’s nothing sexier than a hot Asian chick…or dude for that matter…

A commodity appears at first sight an extremely obvious, trivial thing.  But its analysis brings out that it is a very strange thing, abounding in metaphysical subtleties and theological niceties.

Capital: A Critique of Political Economy (1867) by Karl Marx

A Woman of Property

David Schmahmann is another lawyer-author who joins the ranks of the Permanent Press.  His second novel, The Double Life of Alfred Buber, can be seen as a Judeo-Anglo-Rhodesian-Thai riff on Vladimir Nabokov’s iconic novel Lolita (1955).  Schmahmann, like Buber, is a product of international personality.  The author is a native South African who practices law in Brookline, Massachusetts.  Alfred Buber is the son of Jewish Communists living in Rhodesia, pariah people living in a pariah state as it were.  (Rhodesia withdrew from the British Commonwealth in 1965 to establish a white-ruled sovereign state.  Unrecognized and justifiably shunned by the world community, it lasted until 1979, when it became Zimbabwe in 1980.)

Alfred Buber grew up in Rhodesia but eventually settled in the United States to work at a prestigious law firm of Henshaw & Potter in Boston.  After many years hard labor at the firm, Buber moves from a small boardinghouse to a white mansion, a veritable marble sarcophagus.  Dissatisfied with wealth and in a rut at work, he decides to take a trip to Thailand.  In a bar called The Star of Love, Buber meets Nok.  With this fateful meeting, this overweight nearly hairless Westerner finds pleasure, relief, and the seeds of his own destruction.

Already one can see the contours of Lolita in the narrative.  Schmahmann elevates the novel from a mere facsimile of Nabokov’s best-known work and makes it his own.  In the same manner, Stevie Ray Vaughn covered the uncoverable “Voodoo Chile (Slight Return)” by Jimi Hendrix.  The unexpected delight arises from Schmahmann’s deft handling of Buber.  He begins as an overdetermined caricature and gradually transforms into a fully formed human being.  Buber’s “yellow plague” becomes less a desire for the flesh than a desperate need for companionship with another person.  His finely calibrated professional persona, the fortress-like mansion, and the complex dissembling finally begin to crack.

Western fascination with Asian cultures is nothing new.  As the quote from the pan-ethnic stoner comedy Harold and Kumar explicitly states, human desires know no ethnic boundaries.  Unfortunately, Alfred Buber comes from an older generation and raised in the racially rigid society of Rhodesia, and sees his desires for an Asian woman as something hateful that must be concealed at all costs.  The worst part is not that Nok is Asian as much as she works as a prostitute.

Buber’s descriptions of Thailand are impressionistic and possess the vagueness of fable.  But this should be expected, since he is not a native and everything seems new and odd.  One can compare Buber’s impressions with the razor-sharp descriptions of Sonchai Jitpleecheep, the hero of John Burdett’s crime novel Bangkok 8 (2003).  Buber is a foreigner, a farang.  Bangkok 8 plays like a great companion piece to Alfred Buber, since both are told in first person and Burdett’s crime novel goes into amazing depth about the Bangkok prostitution industry, as multilayered and economically vital as any other sector.

Alfred Buber’s love for Nok develops to the point where he wants her to be his bride.  The economics of prostitution and marriage collide and commingle in a series of scenes with Buber interacting with the Nok’s family and villagers.  Buber, ever the public traditionalist, negotiates with Nok’s father for her bride-price.  (It is ironic how “traditional marriage” advocates fail to mention how the earliest traditional marriages were both arranged and saw woman as property.  Then again, who can rationally discuss anything with someone possessed by Gay Panic?)  In both cases, prostitution and marriage, women are commodified.  Buber, the son of Communists, teases out the “metaphysical subtleties and theological niceties” of the situation.

From the plot to the quality of the writing, comparing Schmahmann to Nabokov is inevitable.  In this case, it is entirely justified.  Anthony Burgess wrote about Nabokov in his book-length review of literature, The Novel Now (1967).  (Burgess also shares with Nabokov, at least with American readers, the notoriety of being known for only one book, despite being prolific.)  Burgess writes that Nabokov is both “pedantic and cosmopolitan” who writes in “the involved, dense, witty, learned, allusive English that disappointed the smut-hound readers of Lolita.”

Buber shares the trait many Nabokovian characters share, finding “the only alternative to perversity, with its magical and terrible privileges, is banality.”  One can see this in Alfred Buber, his near-reverential desires for Nok contrasted with the artifice of propriety and decency.  (Side question: Why do we yearn for our financial betters to be so utterly boring?  And why do we feign outrage when they aren’t?  The hypocrisy cuts both ways.)

An example of Buber at his most tender is in order.  Here Buber describes Nok with a tenderness and joy one usually doesn’t associate with clients of prostitutes:

Buber holds her narrow brown foot in the air as she lies on the bed under a single sheet, traces the curve of her calf with his finger.  What is it, what, I obsess, about this slender curve, this smooth brown muscle, that holds me so entranced?  It cannot be lust alone.  I have had her, recently, cannot penetrate her again and grab any pleasure further pleasure in it, and yet this curve, this calf, holds me still, dominates me, entrances me beyond description.  Or the hardness of the back of her thigh, the very fine, almost impenetrable follicles that give texture to her skin.  I run a finger there and I want it too, endlessly, for myself.  I have her, for a pittance, for today, for tomorrow, for a week or a month if I choose, and yet that is not enough. (Italics in original)

It goes on like this, alternating between an almost detached and clinical sexuality and a lush, overheated sensuality of a Baudelairean prose poem.  The passage convinced this reviewer that the novel was no simple copy of Lolita, but a worthy book in its own right.

While Nabokov is most famous for his book about the pedophile and Burgess is most famous for his book about gangs that speak strange, both writers produced a large multifaceted oeuvre.  Only reading those two books by these titans of literature does a disservice to the reader.  The same goes for David Schmahmann.  While he only has two novels to his name right now, one can only hope he, like Burgess and Nabokov, is capable of so much more.  Nabokov wrote a novel-length poem with academic commentary (Pale Fire), satires of totalitarianism (Invitation to a Beheading), and alternate history erotica (Ada, or Ardor), among many, many other volumes.  And that’s just his fiction.  This reviewer hopes David Schmahmann can be as prolific and imaginative as Nabokov, but hopefully get beyond the great author’s shadow.  It is still early in his career and this reviewer anticipates much from this gifted South African born lawyer.