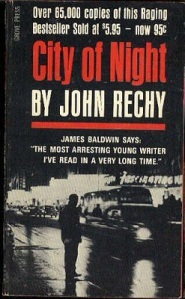 City of Night
By John Rechy
Review by Karl Wolff

Personal History: City of Night by John Rechy was another discovery I found in Paul’s Bookstore in Madison, Wisconsin during my undergraduate years. Sequestered in a crate of random paperbacks was a 1964 edition. (A second paperback edition in this particular instance.) The initial attraction to the book was its vintage status, already more than twenty years old when I purchased it (’97? ’98?). I was also drawn to the noir-ish cover photograph by Grove publisher and translator Richard Seaver. (Seaver would go on to publish everyone from Beckett to Ionesco to Henry Miller to the Marquis de Sade.) Since Rechy’s book could be considered gay erotica, I will admit that I came to this book with some nostalgie de la boue (ungrammatical French for “yearning for the mud”). It’s why I took Latin to read Catullus and Propertius and why I read William S. Burroughs in high school. I also wanted to know the history of all things forbidden.

High school and undergraduate history courses don’t normally cover the history of gay prostitution. This made reading City of Night for the first time an eye-opening experience. This second time around, I read it as more of a historical relic. (And treated with the awe and reverence relics deserve.) One of the consequences of reading is discovering entirely new territories. While minority and women got their cursory token placement in my history classes, nothing was mentioned or acknowledged about gay history, American, global, or otherwise. For me, reading across orientations wasn’t an exercise in increasing my awareness and lessening my liberal white guilt, it was feeding a lustful greed to know more. Between Naked Lunch and City of Night, gay life sure seemed interesting, exciting, and forbidden. Luckily the University of Wisconsin-Madison had a vibrant and supportive LBGT student life. I had gay classmates and even went to a LGBT film festival. (“So that’s what drag kings are. Huh. America is awesome!”) While I was initially drawn to the book’s tabloid nature and winking hints at gay sex between the covers, I realized after I read it that there was more to modern American society than that disclosed in my suburban middle-class upbringing.

The History: City of Night was written by John Rechy in 1963. In other words, it is a work about being gay in Fifties America. The year 1963 was the cusp year at the end of the Long Fifties, an attempt by historians to square the circle of periodicity. From Ike’s inauguration in 1951 to Kennedy’s assassination in 1963, the United States experienced a long period of economic growth and prosperity (albeit for white people) and a cultural attitude focused on creating stability. Two perspectives collide in this decade and how you assess this decade will be based on your own personal interpretation. One perspective is that the Fifties saw the creation of a stable society after two decades (roughly 1929 to 1945) of economic depression, war, suffering, psychological despair, and shared sacrifice. This feeds into the popular mythology of manicured lawns, nuclear families, smiling housewives, and an idyllic Republican suburbia. Another perspective sees the Fifties as a decade of blacklists, redbaiting, redlining, bigotry, segregation, the lynching of Emmit Till, and hysteria about juvie gangs, junkies, Commie infiltration, and a castrating conformity. Both have a kernel of truth to them, but as a historian, I tend to avoid either/or propositions. Mythology isn’t just limited to Greek and Roman myths taught in literature classes. Mythology is also taught in history classes. The Fifties and the Sixties have their own mythologies and one should be discerning enough to recognize them for what they are.

This is a roundabout way of arriving at John Rechy, a Mexican-American writer, raised in Texas, who wrote City of Night. Life for gays in the Fifties and Sixties was not easy. Existing in a world largely hidden, these places included gay bars and areas where men exchanged money for sex. Unless one was in a large metropolis, the notion of homosexuality didn’t exist in the minds of many. Publicly shunned, ghettoized, and persecuted, the threat of discovery included severe consequences. One could lose his or her job. To straight America, gays existed as caricatures, comic relief, and freaks of nature. In the back of my paperback edition, there is a list of books published by Grove. One of these is Three Men by Jean Evans. Here’s the synopsis: “The shocking life stories of three warped and tortured men – a criminal, a necrophile, and a homosexual – brilliantly told in this widely hailed masterpiece of psychological reporting.” Equating these three men is pretty horrifying stuff. It’s hard to lobby for equal rights when one is likened to a criminal and a necrophile. Compounding this dilemma was the Mid-century Modernist habit of glorifying the declasse. Case in point, “The White Negro: Superficial Reflections on the Hipster,” by Norman Mailer, where he equates the jazz-loving white hipster to the psychopath. Part of the popularity of such writers like William S. Burroughs and Jean Genet was their criminality and violent prose. While both writers transcended the caricatures provided by their literary champions, the overall effect on gay liberation was far from positive.

Gay Americans weren’t entirely invisible in Mid-century America. Tennessee Williams, Edward Albee, and William Inge took Broadway by storm with groundbreaking drama. Senator Joseph McCarthy’s familiar Roy Cohn would later be revealed to be a practicing homosexual, along with Communist spy Whittaker Chambers. And one can’t avoid mentioning J. Edgar Hoover’s perplexing relationship by Clyde Tolson. (Perplexing because being married was de rigueur for special agents working for the FBI and Hoover was an adamant believer that homosexuality was another means of Communist infiltration.)

The Book: City of Night follows an unnamed narrator across the United States in a nomadic version of the bildungsroman. His coming of age is coupled with his coming to terms with his own homosexuality and dealing with the threat of aging. After a torturous childhood in El Paso, Texas, a dusty border town, he witnesses his dog die during a wind storm and has issues with his father, a failed musician now working as a janitor in a hospital. Following a brief stint in the army, he makes his way to New York City, having his “first contact with the alluring anarchic world which promised such turbulence.” Throughout the novel, he meets various memorable characters and in the end attempts to come to terms with being gay.

Unlike Our Lady of the Flowers or Naked Lunch, Rechy’s novel can be likened to a gay Grapes of Wrath. There is abundant personal suffering and the occasional heavy-handed metaphor. (The narrator’s attachment to his dog and wondering why it can’t go to Heaven is the most egregious example.) But not everything about the novel is quite so blunt and obvious.

Unlike Steinbeck’s characters in search of a Promised Land, the narrator’s pilgrimage is simultaneously internal and external. He visits Times Square, Hollywood Boulevard, Pershing Square in San Francisco, and the French Quarter, New Orleans. Each of these locations has become a pilgrimage site for gay Americans. Besides his geographic pilgrimages, the narrator also travels on a psychological pilgrimage, in this case being comfortable as a gay man. But like Moses, he never reaches the Promised Land. The novel is light on plot, but makes up for it with in-depth character studies. These range from a closeted individual calling himself “The Professor,” who collects beautiful gay men for his amusement. There is Pete, a closeted hustler who calls queens “queers.” There is Neil, the bondage aficionado and wannabe fascist. The novel has others as well, each offering up a personal testimony, a literary monument to their individuality and meaningfulness as human beings. Not all of these portraits are that idealized, since Rechy’s portraits of drag queens and leathermen tend to be quite crude. We see how Gay America isn’t a secret conspiratorial monolith, but a subculture riven with factions, rivalries, and resentment. Pete tells the narrator that since men have sex with him for money, he isn’t “queer.” He resents the female parody represented by the drag queens. Yet the queens are out and despite their make-up and campy mannerisms, they are authentically who they are, not compromising to society’s wishes for them to conform to pre-determined gender norms.

While the novel’s narrative is very loose and shambling, Rechy gives each character the time and space for a personal testimony. This is where the novel succeeds. This was pretty subversive, since it dares to put a human face on the various figures that make up the cosmology of American gay culture. The narrator gets out of the way and let’s them speak.

The Verdict: The novel is a classic of gay American literature. It is also a relic of a gay America before Stonewell and before the AIDS epidemic. Both of these events galvanized, unified, and even normalized the gay community. Not to sound glib, but City of Night shows straight America the Closet and its like the TARDIS. It’s bigger on the inside. Rechy shows us entire universes inside lives tightly secured and secreted away from persecution and ridicule.

The novel also established the Gay Hustler as an American literary icon. (Other literary icons include the cowboy, the hard-boiled private eye, the Italian gangster, etc.) It is an enduring figure, even if it is from a socioeconomic stratum many would prefer not to recognize.

One thought on “The NSFW Files: City of Night, by John Rechy”