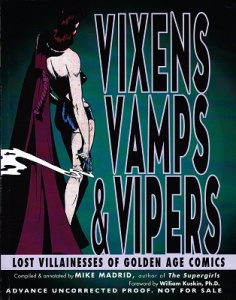 Madame Doom. Fraulein Halunke. Skull Lady. Veda the Cobra Woman. Shoebox Annie French. These are only a few memorable women featured in Mike Madrid’s new book, Vixens, Vamps & Vipers: Lost Villainesses of Golden Age Comics. The Golden Age existed from “the late 1930s [to the] mid ’50s.” As Madrid asserts in his opening essay, “These women were surprisingly emancipated for what we today think of as a more conservative age.” Vixens acts as a companion piece to Divas, Dames, & Daredevils, a collection that explores lost Golden Age superheroines. Comics, long decried as an inferior medium, offers an illuminating reflection on the issues of the day. The Golden Age comics, unhampered by the Comics Code Authority of 1954, possess a strange cocktail of female liberation, schlocky romance elements, and downright unsettling racial stereotypes.

To focus on the craft and execution of the writing and art can sometimes obscure other more fascinating issues. In an anthology like this, Madrid preserves what would otherwise be considered ephemera or trash. Truth be told, for every stand-out example of comic book craftsmanship, there’s more than enough examples of mediocre art, cardboard characters, and lame plots. What can we discover about society’s mores from these examples?

Included in this collection is a strip about the detective Black X foiling the plot Madame Doom. With art by Will Eisner and Dan Zolnerowich, Black X discovers the Madame Doom’s terrorist plot using human bombs. Eisner’s Black X has a faithful Indian sidekick named Batu. The Black X comic is illustrative of the trope where the villainess must repress her romantic desires for the hero. Batu is not the only non-white sidekick, but he comes across as the least cringe-worthy in this collection.

On the issue of race, “Rulah: Jungle Goddess” presents a downright vertigo-inducing example of World War 2-era race politics. Rulah, the heroine, rules over her jungle kingdom with benevolence. She’s white (natch) and her subjects are black. Her enemy is Mava (black) who is having an affair with a Nazi officer. Mava wants to use Nazi flying bombs to take over Rulah’s jungle kingdom and liberate the African tribes. Since this is a comic book written in 1941, the difference between good and evil is stark and obvious to the reader. To the modern reader, it is a confusing mess of benevolent racism (good guys) and a black woman befriending a Nazi (bad guys). Some comics age like fine wine. Others age like mayonnaise on city pavement in the middle of July. For all of its bewildering, migraine-inducing race politics, gung ho patriotism, and imperialist condescension, “Rulah” is a worthwhile object of study.

The Golden Age offers numerous other examples. Unlike the predictable white bread superheroines, the villainesses were racially diverse. This racial diversity was one of the first casualties of the Comics Code. Beyond defanging villainesses, the enemies of the heroes became less violent, less diverse, and less interesting. Thank you, Frederick Wertham, for destroying art and turning Eisenhower’s America into a hellscape of blandness. It is fascinating how similar American and the Soviet Union were in their desire to suppress allegedly dangerous artistic expression.

One of my favorite comics in this collection was “Mable Reine: Queen of the Jungle,” by an unknown artist. The jungle in this case wasn’t the same one occupied by Rulah and Sheena, but the hobo jungles of the Great Depression. “Mable Reine” reads like a cross between Gangs of New York and Lord of the Flies. Mable is orphaned after a plane carrying her family crashes. She’s the only survivor, receiving food and aid from a pair of hobos. After she gets arrested, she sharks her way up the criminal food chain. Mixing the skills of a criminal mastermind and a revolutionary leader, she leads hobo assaults on small towns. It’s like The Dark Knight Rises, except that Bane is a teenage girl and a hobo. Forget Marvel and DC, Hollywood should make this movie right now!

Despite the crudeness of execution, the comics collected here presents a fascinating snapshot of America at a different time. The book can work as an object of personal amusement, a portable archive, and raw material for academics investigating American sexual and racial politics. It’s also fun to read.