It’s MP Johnson Week at The Driftless Area Review. To celebrate the release of Dungeons & Drag Queens by Eraserhead Press, I’m devoting a week to all that is MP Johnson and the glory that is drag. Below are four non-English language novels about drag queens.*

MP Johnson Week will include an interview (on Thursday) and my CCLaP review of Dungeons & Drag Queens (on Friday). MP Johnson will also be Guest Blogging at The Driftless Area Review (on Wednesday). Stay tuned!

Drag queens, transvestites, and transsexuals are not synonymous, despite that notion being commonplace in mainstream Hollywood film and the general ignorance of those in organized religion and in the corridors of government power.

A transvestite is an individual wearing the clothing of the opposite gender on a full-time basis.

A drag queen is a male wearing female’s clothes, coupled with a more performative aspect, although transvestites and drag queens aren’t mutually exclusive. To be a queen is less about status than about attitude.

A transsexual is an individual falling into one or several different categories relating to gender non-conformity. Surgery may or may not be involved. It all boils down to the individual case and that individual’s own self-conception. Simply put, sex, like gender, falls along a spectrum, not simply a matter of binary opposition.

And as a male-identifying heterosexual, I don’t consider myself the final authority on these classifications. But I do feel it is my duty as a critic and cultural observer to brush away the confusions (both intention and unintentional) that plagues discussions about these matters. These three terms aren’t simply to be thrown around without consequence. 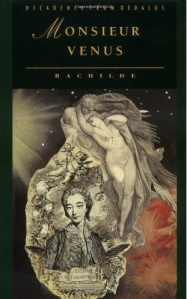 Full disclosure: I have not read Monsieur Vénus.

Here is the back cover description from the Dedalus Edition:

As a woman, Rachilde is a rarity among Decadent authors, and in Raoule de Venerande she created a decadent heroine of singularly monstrous proportions. For the imperious Raoule, Amazon and expert fencer, scion of an aristocratic line that has engendered Sadean libertines and pious spinsters, lesbianism is merely a banal vice. She seeks to transcend the limits of sensual experience in a liaison involving the sado-masochistic swapping of genders, and in which necrophilia can be relished in advance of death. The object of her desires is Jacques Silvert, whom she plucks from his insalubrious slum and installs as her mistress in a lavish boudoir. Raoule systematically enslaves Jacques by forcing him to surrender his maleness, while she embraces the role of virile lover and ultimately that of the husband about to be betrayed.

Published in 1884, when Rachilde was only 20, Monsieur Venus caused a great scandal in French literary circles and remains the most notorious of her many decadent novels.

Our Lady of the Flowers, by Jean Genet
France, 1943

One of my all-time favorite novels. Written in a French prison during the violence of the Second World War, Our Lady of the Flowers is Jean Genet’s masturbatory fantasy about Divine, a drag queen, and her boyfriend, the pimp and stool pigeon Darling Daintyfoot. Radical in its vision, yet oddly decadent and medieval, it is a chronicle of the marginalized gay community during the Interwar period. For more details, click here for my essay, part of The NSFW Files essay series.

NB: This essay will be expanded when The NSFW Files becomes a book, to be published by The Chicago Center for Literature and Photography. 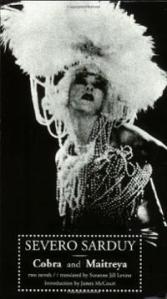 While I have not read Cobra, I have read Sarduy’s Firefly (another Translation Tuesday entry).

Here is the back cover description of Cobra:

Cobra (1972) recounts the tale of a transvestite named Cobra, star of the Lyrical Theater of Dolls, whose obsession is to transform his/her body. She is assisted in her metamorphosis by the Madam and Pup, Cobra’s dwarfish double. They too change shape, through the violent ceremonies of a motorcycle gang, into a sect of Tibetan lamas seeking to revive Tantric Buddhism.

And here is Roland Barthes enthusing about the novel:

In Severo Sarduy’s Cobra, the alternation is that of two pleasures in a state of competition; the other edge is the other delight: more, more, still more! one more word, one more celebration. Language reconstructs itself elsewhere under the teeming flux of every kind of linguistic pleasure. Where is this elsewhere? In the paradise of words. Cobra is in fact a paradisiac text, utopian (without site), a heterology of plenitude: all the signifiers are here and each scores a bull’s-eye; the author (the reader) seems to say to them: I love you all (words, phrases, sentences, adjectives, discontinuities: pell-mell: signs and mirages of objects which they represent); a kind of Franciscanism invites all words to perch, to flock, to fly off again; a marbled, iridescent text; we are gorged with language, like children who are never refused anything or scolded for anything, or, even worse, ‘permitted’ anything. Cobra is the pledge of continuous jubilation, the moment when by its very excess verbal pleasure chokes and reels into bliss.

From The Pleasure of the Text 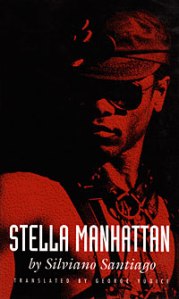 While I have read this novel, it has been too long for me to write a review of it. In lieu of that, here is the plot summary from Duke University Press:

Twice the winner of the Brazilian national book award, Silviano Santiago caused a sensation in 1985 with the publication of Stella Manhattan, a story of sexual scandal and political intrigue. Set in the Brazilian exile community in New York City in the late 1960s, this noir novel is an electrifying adventure story of a young gay Brazilian man trying to make a go of it in New York.

After being forced from his native country by an unforgiving father who embodies the authoritarian temper of the Brazilian dictatorship and is embarrassed by his son’s homosexuality and transvestism, Stella Manhattan, alter ego of Eduardo da Costa e Silva, lands a job in the Brazilian consulate with the help of his father’s friend, Colonel Valdevinos Vianna. Eduardo is also recruited by Vianna to help him bring his own alter ego, the sadomasochist Black Widow, out of the closet. Transformed by black leather, the Black Widow cruises the streets and bars of New York in search of American flesh. Surrounding the relationship between these two men is a group of Brazilian guerrillas who attempt to press Eduardo into their service in order to entrap the colonel. The guerrillas are at the center of a network of revolutionaries, from the Cubans to the Black Panthers and the Young Lords. Virtually apolitical, Eduardo/Stella is drawn by desire into the conflict between the Brazilian government and its communist opposition.

Eduardo also gets caught in the designs of other memorable characters of various sexual and political persuasions: the reactionary professor Aníbal, confined to a wheelchair, who enjoys watching his wife Leila make love with men she picks up on the street; and Paco, alias La Cucaracha, a flamboyant queen, a rabid anti-Castro Cuban exile, and the most sympathetic of this gallery of outcasts.
Working through two complex themes — politics and sex — Santiago sets the action in New York to emphasize the interaction of the seemingly contradictory impulses of liberation and Americanization that Brazil underwent in the late 1960s. As in Manuel Puig’s Kiss of the Spider Woman, political and sexual liberation cut two ways — neither one necessarily compatible with the other. Exploring the complexities of repression that affect all forms of identity, Santiago mingles tragedy and farce as international intrigues are played out in New York’s Latino and black neighborhoods, and the genteel world of international diplomacy is thrust into the milieu of urban gay street life.

Silviano Santiago was born in Brazil in 1936. He is the author of four novels, several volumes of short stories, poetry, and literary and cultural criticism. His Em Liberdade (1982) earned him the prestigious Jabuti Prize for the best Brazilian novel and he has been named a “Chevalier dans l’Ordre des Palmes Académiques” by the French Minister of Education. Having taught in universities throughout the United States and France, he now resides in Rio de Janeiro where he dedicates himself to teaching at the Universidade Federal Fluminense and writing fiction and criticism.

[Translator] George Yúdice is Professor of Romance Languages at Hunter College and Professor of Cultural Studies at the City University of New York Graduate Center.

One thought on “Translation Tuesdays: 4 Non-English Works About Drag Queens”