An occasional series that is a continuation of my essay anthology, On Being Human: critical looks at books and movies that examine the question of humanity.  (Buy the limited edition hardcover, Kindle version, or download it for free at the Chicago Center for Literature and Photography)

Continuing with this week’s theme, I’ll be looking at Breakaway (Cassandra Kresnov, Book Two).  The book follows fast on the heels of Crossover, where we are introduced Cassandra Kresnov, an artificial human and former super-soldier of The League.

Breakaway begins almost immediately after Crossover ends.  Cassandra Kresnov, known as Sandy to her friends and comrades in the Callayan Security Agency (CSA), finds herself overworked and stressed out.  Callay’s capital city, Tanusha, has become riddled with acts of sabotage and domestic terrorism.  To complicate matters, Tanusha holds high-level talks among politicians, tech firms, and financiers.  Talks revolve adopting the measure Article 42.  In a nutshell, Callay seeks to become independent from The Federation, a conservative entity ruled from Earth.  In culture, morality, and habits, the Federation is very Earth-centric.  Earth is home, at least on a subconscious level.  The nostalgic conservatism and Earth-centric political rule runs counter to the techno-anarchic tendencies of The League.

But … and there’s always a but … Sandy represents a threat and a new beginning for both interplanetary regimes.  Callay has had to rapidly adjust to Sandy’s presence, both as a piece of forbidden tech and a recent attack on the capitol by GI elements.

Breakway has less action than Crossover, but it begins and ends with great set-piece action scenes.  Joel Shepherd creates talky science fiction, but it never feels bloated.  Many times it feels like overhearing a late-night college bull sessions.  Both sides contain many articulate and intelligent people.  Both sides make valid points.

Shepherd’s style is unadorned, but very much his own.  Tech-savvy, slangy, “global”, and multicultural.  Tanusha is a multicultural megalopolis that is predominantly Asian and Indian in character.  Sandy stands out, not merely for being a piece of banned tech, but also as a young-looking white European.  In the book Shepherd describes her as looking like she’s fifteen.  (Dream casting: Shailene Woodley.  Heck, she even sports a pixie cut and acts of asskickery in The Divergent Series: Insurgent.)

The Fault in Our GIs

To return to the plot, Sandy’s interactions with the movers and shakers of Callay, The Federation, and The League point to a major paradigm shift.  She meets the League ambassador and another high-level GI named Major Mustafa Ramoja, League Internal Security Organization (ISO).  Unlike Sandy, he is black. 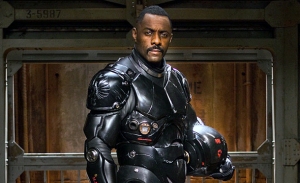 Idris Elba as Major Mustafa Ramoja.  (Because that would be awesome.)

She meets Ari Ruben, a former hacker working for the CSA.  They have a meet cute.  While Sandy had been sexually active during her life in Dark Star and while incognito at the beginning of Crossover, she had yet to have a love life.

During a hearing she encounters Swami Ananda Ghosh, a notorious nutter-wallah.

But now we must look at you.  You, Ms. GI, who are not at all organic, who is made of artificial parts from the highest technology laboratories, whose entire being is inanimate, inorganic and not at all even alive by the terminologies used by a great many scientists and spiritual leaders before the coming of Gis, and GI technology, from the League.
[…]
I came here to look into your eyes. […] I came here to see for myself that you are alive, and that you have the energy, and the soul, the spirit of a living being … Ms. GI, do you know what this means?
The organic is alive. […] The inorganic is alive.  The carbon and the non-carbon are alive.  The soul of life resides in all things.  Everything is alive.  The whole universe, the very walls about us, the floor, the wind, the earth and the suns.  The universe is all of one consciousness and life is nothing more than the dreaming of that single oneness.  And you, Ms. GI, you are the final, the scientific, the spiritual proof of it all.

What does it mean to be human?  Not as much as it used to.  Whether it was the Copernican revolution in astronomy or Darwin’s theory of evolution, years of scientific discovery have yielded the marvels of man’s insignificance in the universe.  Ghosh’s assertion that everything is alive, even the non-organic, simultaneously smacks of New Age hogwash, but … always the buts … it has an egalitarian appeal hard to ignore.

And yet … and yet, Shepherd’s further unfolding of the Federation reveals some chinks in the armor.  Humanity suffered a nanotech plague that killed hundreds of millions.  Now nanotech is carefully regulated and highly controlled.  Nanotech exists in that liminal area between the alive and the not-alive, akin to viruses.  A virus, while not technically alive, still contains genetic data.

Shepherd also hints at a contact between the human species and an alien species, possibly sentient.
Close to novel’s end, President Katia Neiland reveals the nature of the high-level talks.  It is a classic bait-and-switch.  When she took a sounding for support among Federation worlds for Callay to become independent, it would become useful for her plan.  She reveals that Callay will become the political center of the Federation, not Earth.  Suffice to say, complications ensue. 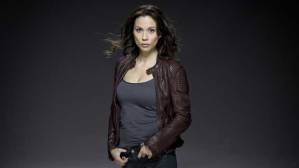 Yet while this act comes as a shock to many, it had precedent in Earth history.  In this imagined future, the United States had grown to become isolationist and xenophobic.  The global community decided to move the headquarters of the United Nations from New York City to Tbilisi, Georgia.  The change was also due to the political ascendancy of India and China.

Breakaway is a novel of multiple paradigm shifts.  Sandy, despite being a GI, an artificial construct, is considered alive, at least by an extremist religious leader.  Callay proposes to move its political epicenter from Earth to Callay.  And Sandy matures as a person, transitioning from the impulses of raw lust to the more refined emotions of love, or at least infatuation, for Ari.

With every paradigm shift, there is always the tendency for a counter-reaction.  Change is a tough thing.  Breakaway is a great example of illustrating a paradigm shift as it occurs in real time.  Despite the science fiction genre trappings, Shepherd could be writing for any culture amidst a particularly torturous change.  But the wonderful thing about paradigm shifts is that they eventually become second nature.  What was novel or strange or sinful or evil becomes the new normal.  Gay marriage.  Drone warfare.  Artificial humans treated like organic humans.  It is nice to say one is progressive, that one adheres to the belief that the world should become more inclusive, tolerant, egalitarian.  A charming notion and one I agree with.  But thinking that passing a law (or batter of laws) will somehow immediately solve things for the better is also quaint and naïve.  Legislative redress of past ills resulted in violence, chaos, rebellion, and worse.  This occurred with Prohibition in the 1920s and The Civil Rights Acts of the 1960s.  Change needs more than good intentions to survive.  One has to prepare for the fact that not every paradigm shift is successful.  Prohibition was a comic failure and the civil rights struggle is still, to put it delicately, a continuing work in progress.

We’ll find out in Killswitch.

One thought on “On Being Human Redux: Breakaway (Cassandra Kresnov, Book Two), by Joel Shepherd”