Recently I reviewed Seth Kaufman’s “reality TV novel” The King of Pain over on CCLaP. We discuss literature, TV, reading, and The Jersey Shore’s responsibility for the cultural apocalypse.

What inspired you to write The King of Pain? Why did you write it in the format you did? (Novel chapters alternating with short stories)

Two of the central ideas to the book–a Hollywood guy stuck under his home entertainment system who is somehow involved with a book called “A History of Prisons”—came to me over twenty years ago. The image of a man pinned by his TV seemed like a good comic metaphor for a nation that is consumed by entertainment culture. As for the book title, that sprang out of me interviewing my grandfather about the 8 years he spent as a political prisoner between the wars in Poland. Only three of his anecdotes made it into The King of Pain, but the idea of imprisonment and all that comes with it–the horror of torture, of absence, of boredom, of hunger–and tricks and triumphs of surviving such conditions really stayed with me.

Years later, when Reality TV had really blown up and Dick Cheney described waterboarding as “a no-brainer,” I finally had an “Aha!” moment. I knew who the man stuck under the entertainment system was and what he did and how he got there. So I guess I should thank Dick Cheney for being such a misguided, callous jerk and for Survivor for introducing “torture-lite” TV. I began to think about torture, imprisonment and reality TV as sort of feeding off each other.

As for the alternating stories, I had this idea it would be fun. That the stories would resonate off Rick Salter’s stories about the show. And truly, stories are how we survive. They save us all. My grandfather used to tell me that he could never be bored in life because he could always close his eyes and tell himself stories. Then the idea of having a character read the stories critically seemed not only funny, but a good way to examine how we read, absorb, enjoy and even miss the point of the stories we read.

How did your background in TV journalism inform your writing process?

I think it helped me establish credibility and color with regard to Rick Salter. The fact that I can talk about some of the machinations of TV makes the whole premise of the show more believable. Mentioning insider stuff like TV Up Fronts or the annual press tour in Pasadena or the fact that these shows make contestants indemnify the producers for everything from personal injury to getting a venereal disease, helped me establish Rick as a TV executive.

Why are people simultaneously attracted to and repelled by reality shows?

Who was it that said: “To stare at train wrecks is to be human?” Oh, I guess it was me.

It is a common saw to see TV as the enemy when it comes to this nation’s literacy standards. Is there any truth to that? Or is TV an easy scape-goat, while other culprits go unnoticed?

Ultimately, I think it’s a scape-goat. It’s everywhere and can be consumed with zero effort, so passive TV watching seems dangerous, or if not dangerous, at least a massive time suck. But I think reading and literacy are honed at home. Reading is a solitary, habit-forming pursuit that is best learned from those around you: parents, brothers and sisters, cousins, friends, and of course, teachers.

In the beginning was the word. All of those mediums start with the word. So writing and reading reign supreme in my estimation. But after that, it’s all storytelling. Although I’m not quite sure how fine arts fit into that statement.

Do you have any other projects in the works?

I have a picture book for adults coming out in February called If You Give an Architect a Contract. It’s a parody of the million selling kids book If You Give a Mouse a Cookie. But it is really an examination of all the crap that can and usually does happen when you renovate anything. It is based on the collective misery of everyone I’ve ever met that has done anything to their house or apartment.

But more seriously, my next novel, which is about gambling, wealth and a fictional island in the Caribbean, is this close to being “finished.” And I have two other books in the works. I also play in a band: The Fancy Shapes. And we are supposed to record another album this year.

Who are some of your favorite authors?

What are some of your favorite TV shows and movies?

TV: The Simpsons, Seinfeld, SpongeBob SquarePants and Sesame Street. And the brilliant britcom, The Vicar of Dibley.

Movies: His Girl Friday, Breathless, Picnic at Hanging Rock, This Is Spinal Tap, Singing in the Rain, Philadelphia Story, It Happened One Night, Team America, and everything Chaplin, Marx Brothers and Keaton. Clearly, I need to get out more. 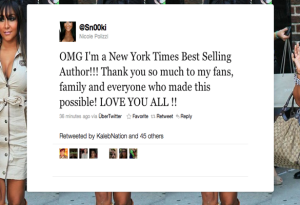 Is The Jersey Shore the sign of Western culture’s imminent collapse? Or am I being alarmist?

Ha! Jersey Shore has been canceled, so Western culture will live another day. From where I sit, Snooki and the Situation are harmless compared to everything else looming over us.

One thought on “An Interview with Seth Kaufman”