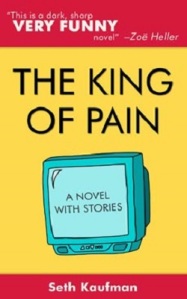 The King of Pain by Seth Kaufman, Editorial Director of TV Guide.com, has been called a ‘reality TV novel,’ but it is more than that. The novel begins with reality TV executive producer Rick Salter, after a night of drunken carousing, pinned to the floor by his massive home entertainment system. Between blackouts from the pain, he reads a book given to him by Amanda, his former associate producer on The King of Pain reality TV show. The book, called The History of Prisons, is written by someone named Seth Kaufman. What follows is Salter trying to escape his predicament, alternating with the fictional Kaufman’s book on prisons. The result is both a biting satire of Hollywood showbiz, in the spirit of Get Shorty and Sunset Boulevard, and a metafictional romp across genres.

The book follows Rick Salter’s meteoric rise from Hollywood obscurity to critical acclaim to the lowbrow schadenfreude of reality TV. Rick’s reality TV show, The King of Pain, follows contestants enduring different kinds of torture (sleep deprivation, branding, etc.). This makes Salter a controversial figure. The night before his accident, he had a verbal fracas on Larry King’s TV show. Salter’s reality TV show underscores America’s morally ambiguous stance on torture and cruelty. Salter just had the marketing genius to bring the atrocities of Gitmo to Middle America’s TV screens, trading dubious confessions from alleged terrorists for contestants battling each other for a cash prize. Salter puts Robert Anton Wilson’s adage to use, “‘Reality’ is what you get away with.” (It goes without saying that “reality TV” shows are some of the most contrived and overtly manipulative in the entire medium.)

Amidst Salter’s biographical asides and his retelling the ups and downs of The King of Pain‘s TV season, we read several stories in The History of Prisons. Besides enjoying the variety of stories, we, like Salter, have to puzzle out why his former associate producer would give him this book. We become Rick Salter when reading the stories. (Insert Keanu Reeve’s saying, “Whoa …” a la The Matrix.)

The stories themselves run the gamut of genres, all with a common motif of prisons. “The Stocks” tells the story of a prison guard in an Idi Amin-style African dictatorship. “The Daiquiri Case” is a classic whodunit set at Gitmo. (Good if you like NCIS, JAG, and other military procedurals.) “Longman” is a short political fable. The real stand-out story is “The Gizless Days of Thomas Binder.” Binder, the young protagonist, has been accused of a crime with his punishment being rendered “gizless.” He is cut off from all digital entertainments and has to attend group therapy. What follows is a wonderful meditation on reading books, specifically those on paper. He finds a long-abandoned used bookstore and all manner of wonderment follows. While these science fiction tropes have been alive since Fahrenheit 451, Kaufman breathes new life into them, discussing things like micropayments, copyright, and pleasure.

In the end, The King of Pain, with its trenchant satire, ‘inside baseball’ critique of the Hollywood machine, and metafictional cleverness, is still a fun book to read. Salter delights as a foul-mouthed TV exec who seems ethically challenged at the best of times, constantly berated by his associate producers Amanda and Little Ricky. Then there’s the reality TV contestants, providing misanthropy and schadenfreude for the audience at home. It’s a book that wears its social critique lightly, but has a humane layer beneath Salter’s acidic tongue and the relentless dehumanizing element of the reality TV genre.