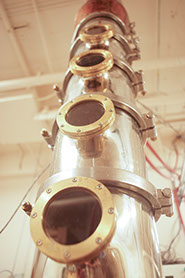 Sammons guided me to the darkly lit Tasting Room. Appointed in a retro-industrial aesthetic, it boasted twisted light fixtures, swanky metal seats around two tables, and a large bar. We chatted about the local micro-distilling scene while I sampled the various craft spirits. When he showed me around the stills and barrels in the back warehouse, he gave me an abbreviated biography that included work as an Assistant District Attorney for Milwaukee County and counter-terrorism work with the CIA on the Bin Laden team. The name Twisted Path seemed appropriate for a Distiller a background this fascinating.

Sammons distills rums and whiskeys in a still of his own design. This unique still stood tall in an idiosyncratic combination of wood, copper, and rubber hoses. A smaller still stood to the side, used for distilling vodka. Milwaukee history is studded with pioneering engineers coming up with innovative designs in unlikely circumstances. Falk, Harnischfeger, and Allen-Bradley all started out small.

In fact, Sammons’ father, who assisted with some of the design and installation, was a patent attorney that did work for Allen Bradley.

Sammons merges the traditions of engineering know-how with the craft of distilling. Prior to Prohibition, Milwaukee had several distilleries. Twisted Path represents another part of a greater beverage renaissance. His unlikely background and experimental approach to distilling spirits has produced a beautiful array of craft spirits.

The vodka comes in two proofs. The lower proof has the slightest burn when taken neat. Vodka is supposed to be neutral alcohol, but the best vodkas have a specific odor and taste. The wheat gave it subtle character, riding the fine line between vodka and white whiskey. But unlike a white whiskey, where character jumps out, the vodka’s character is subtle, almost subliminal. The 100 proof possessed the same attributes of the lower proof but with a smoother finish. It would make an excellent martini or gimlet.

The light and dark rums came as a revelation. For those turned off by rum from too many cheap rums and coke in college may want to give these a try. The genius to making a good rum is in how to present the sweetness component. Traditionally, rum is made with molasses and sugar. Twisted Path distills with only molasses. Instead he distills it slowly, sacrificing a higher volume for better taste. The dark rum made for enjoyable sipping. He described it as “a rum you can sip like a whiskey.” It had a pleasant nose and mouthfeel. After a few sips, the molasses note comes to the fore. It gives the palate a warm embrace and a sweetness that is dark and rich. It is sweet, but not a cloying, sugary sweet. Who could have imagined Milwaukee becoming the epicenter for incredible craft rums? The Great Lakes Distillery has a rum with a more pronounced maple note. With Winter fast approaching, Twisted Path’s Dark Rum would be a great accompaniment either served neat or in an Old-Fashioned. Brandy is a traditional component of Wisconsin Old-Fashioned, but Twisted Path shows how great craft spirits can be produced without following traditional paths.

For those curious to see the inner workings of Twisted Path Distillery, check out the website. Sammons is more than happy to arrange tastings and a tour.