A series dedicated to examining the science fiction and fantasy films from 1979 to 1989. The series will investigate whether these films possess certain ineffable qualities missing from today’s films of the same genres.

Marion: You’re not the man I knew ten years ago.
Jones: It’s not the years, honey; it’s the mileage.

For my first installment in this series, I looked at Francis Ford Coppola’s Apocalypse Now, the 1979 psychedelic fever dream about the Vietnam War, loosely based on Joseph Conrad’s Heart of Darkness. One year later, Steven Spielberg directed Indiana Jones and the Raiders of the Lost Ark. This inaugural installment of the Indiana Jones series would result in three more films, a TV series, and countless other tie-ins. On a more personal note, Raiders was one of my earliest exposures to Steven Spielberg, Harrison Ford, John Williams, and, to a much lesser extent, Alfred “Trow me dee idol!” Molina. Because of the frightening ending, it would be years later before I saw Raiders in its entirety.

(And kind of let down in the process.)   Raiders captures the zeitgeist of the Eighties. Carter was out, Reagan was in. No more malaise and on with Morning in America. In addition to Reagan ushering in a conservative counterrevolution, he was a former B-actor and GE pitchman. Raiders came out in 1981 and the Eighties hadn’t yet become The Eighties. The economy still sucked, John Lennon was dead, and the Iranian hostages had been recently freed. On March 30th, Jodie Foster fanboy Mark David Chapman attempted to assassinate Reagan.

On June 21st, Raiders opened to an America looking for heroes and high adventure. Director Steven Spielberg would create another blockbuster and Harrison Ford would continue his meteoric rise as the most bankable star in Hollywood.   Raiders really isn’t a science fiction or fantasy film. It does have fantasy elements, but it traces its roots back to Thirties film serials and Boy’s Own adventure stories. The serials and adventure stories are genre predecessors of the modern science fiction and fantasy story. Raiders, with its religious artifact and international adventuring, is a distant relative to modern films like The Da Vinci Code.

Harrison Ford, as intrepid archaeologist Indiana Jones, goes on a globe-trotting quest to find the Ark of the Covenant. Taking place in 1936, the film contrasts Jones’s quest with that of Vichy stooge Dr. René Belloc, played with oily charisma by British actor Paul Freeman. Belloc assists the Nazis in their quest to dig up relics. (The SS had its own archaeological department, in an attempt to add academic and intellectual gravitas to the concept of “racial ideology.”)   The film is chock-full of memorable moments: Karen Allen, as Marion Ravenwood, in a drinking game at her tavern in Nepal; the shoot-out in the tavern; the climactic chase sequence; Indie fighting the Nazi lug around a flying wing; and the melty end to the baddies as the Ark wreaks vengeance. (And this is just the abbreviated list. Like Casablanca, a film it openly emulates, nearly every scene is memorable. The final scene, with the Ark placed it in a crate and wheeled into the bowels of a secret warehouse, inspired the series Warehouse 13. 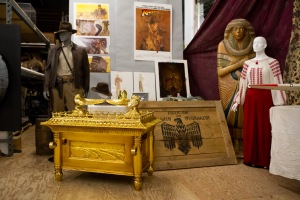 Another appealing aspect of Raiders is Indie himself. Both an intellectual and an adventurer, he also gets beat up … a lot. When he gets punched, shot, or thrown off a moving truck, you know he suffers. This human vulnerability adds to the power of the film. He actually seems world-weary.

An actual miniature used in the film.

On a special effects level, Spielberg brilliantly integrates them into the film. The viewer doesn’t really know they are there, unlike CGI, which can come across as distracting and too clean. The expert use of models, miniatures, and stop-motion animation create a spellbinding entertainment. It is one of those rare films that captured the innocence of my childhood, yet still holds up these many years later. (Unlike Indiana Jones and the Kingdom of the Crystal Skull. But Indiana Jones is a franchise. That means there are films that are good, films that are bad, and films fans would prefer not exist.)