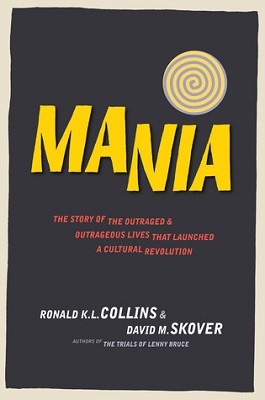 No shortage of ink has been spilled over the Beat Generation. Numerous biographies of authors and supporting players, anthologies of correspondence, and most recently, previous incarnations of classic Beat novels now exist. In the last category, there were Howl: Original Draft Facsimile, Transcript & Variant Versions (1985), Naked Lunch: the Restored Text (2001), and On the Road: the Original Scroll (2007). Like other big ideas or big historical events, one has to ask: What more is there to write on this topic? Has the Beat Generation been exhausted? Enter Ronald K.L. Collins and David M. Skover. Collins teaches law at the University of Washington Law School and Skover teaches law at Seattle University. Mania: the story of the outraged and outrageous lives that launched a cultural revolution is the third book they’ve co-authored. Their books focus on the convergence of the arts and free speech. Besides teaching and writing, their commitment to free speech involved both of them spearheading an effort to get Lenny Bruce posthumously pardoned by the state of New York.

On a more personal note, I’m a big fan of the Beat Generation. Today my tastes lean more towards the deadpan humor of William S. Burroughs than the proto-hippie earnestness of Jack Kerouac. I first encountered the Burroughs-Kerouac-Ginsberg triple threat while in high school. I devoured novels and poetry from the Beats pretty steadily throughout high school and as an undergrad in Madison, Wisconsin. The old saw is that one reads either Ayn Rand or J.R.R. Tolkien while in high school. While I’m reluctant to admit it, I did read The Fountainhead senior year, ensorceled by Rand’s hot-house architectural potboiler and her cod-Nietzschean temper tantrums about individuality. Then again, it was high school and I was a pretentious, self-involved teen. The point is, I came to Rand after reading Naked Lunch, On the Road, and “Howl,” along with the works of lesser lights like John Clellon Holmes, Neal Cassady, and Herbert Huncke. Rand represented the literature for the Post-World War 2 generation. Her anarcho-capitalist vision, written like Stalinist-era Socialist Realism with the roles reversed, appealed to the normals in the boardrooms and suburbs of America. The Beats, with their penchant for free jazz, vulgarity, drugs, and unconventional sex, frightened “straight” society. (Pun very much intended.)

Mania explores the impact of the Beat Generation on Ike’s America from the perspective of the arts and free speech. Beginning with Lucien Carr’s murder of David Kammerer in 1944 and ending in the Howl obscenity trial of 1957, Collins and Skover manage to keep the narrative within tight bounds and maintain an overall clarity of an amicus brief. Written in the style of a novel, the book takes us back to the United States of the 1940s and 1950s. This is an America where one could be sent to a mental asylum to have one’s homosexuality “cured” and one could be arrested for selling a book of poetry on charges of obscenity. On the deepest viscera of Real Murrica are these two things seen as mainstream American ideals that need to be preserved. Sanity, like democracy, is a matter of majority rules. The question remains: Who should decide what you can or can’t read? With self-appointed moral guardians becoming more and more scandal-prone, the answer today is pretty obvious.

The only possible demerit for the book is its novelistic style, but that will depend on the reader’s tastes. I happened to like it, but not everyone will. That is a minor quibble compared to everything else in the book. Collins and Skover map out the free speech issues at stake, including the nebulous concept of “community standards” and the equally nebulous concept of “redeeming social importance.” These are tricky issues to nail down, especially when the defense can drag up four letter words peppering Ginsberg’s poetry and cite those words as evidence of obscenity. In obscenity trials, two straw men get hauled out: the threat to our children and sexual arousal caused by said literature. By today’s permissive standards, it seems patently absurd to arrest anyone for selling a book of poetry.

Today’s alleged permissiveness comes at the cost of an alphabet soup of public and private watchdog bureaucracies. The Motion Picture Association of America (MPAA), the Federal Communications Commission (FCC), the Parents Music Resource Center (PMRC), along with countless groups with the word “family” in their name. While cable TV has either bleeps or hilariously nonsensical edits, CDs have warning labels plastered over them so they look like cigarette packs, and radio-friendly songs mean bleeps and blandness, literature, thanks to the Howl trial escapes unscathed from idiotic things like warning labels and censoring. Mania! is a worthwhile book for those wanting a reader-friendly introduction* to the Beat Generation, their critical importance in the history of literature, and how the Beats became central in First Amendment history.

*This is an outstanding book for those curious about the Beats but don’t know where to start. Collins and Skover include a comprehensive bibliography of novels, poetry, biographies, newspaper articles, and academic criticism for the Beats. An added bonus is their reconstruction of Judge Clayton Horn’s decision in People v. Ferlinghetti (1957).