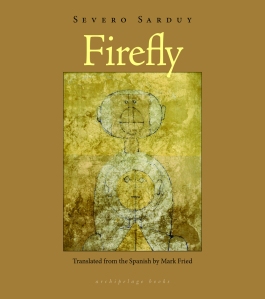 Lauded by French semiotician Roland Barthes as a creator of a “paradisiac text,” a “teeming flux of every kind of linguistic pleasure,” Severo Sarduy recreates a pre-Castro Cuba in his late novel Firefly.  Unfortunately, Barthes premature death in 1980 prevented him from reading Sarduy’s slim novel.  (He did however praise Sarduy’s earlier novel Cobra in the seminal work, The Pleasure of the Text.)  Linguistic pleasures abound in Firefly, about the misadventures of a child named Firefly whose giant head and poor sense of direction get him in all sorts of trouble.

Sarduy creates a kind of decadent picaresque, painting a Cuba immersed in occultism, decay, and danger.  We meet Firefly’s aunts “all in shining silk” and wearing “crocodile-leather high heels with red platforms and over their shoulders see-through handbags like round canteens for a thirsty outing.”  After faking his death from rat poison, Firefly ends up in a hospital where he gets examined by two doctors, Gator and Isidro.  Gator, “lean and olive-skinned”, wears a pinstriped suit, rimless glasses, and “a silk tie decorated with four-leaf clovers.”  But his footwear is most disturbing, since “His shoes are made of his own skin.”  His rotund counterpart, Isidro, teaches anatomy, and “owns a mouse-infested grotto” that functions as a makeshift medical school, where students gather to learn “his Frenchified skills in the pestilent art of dissection.”

Once freed of the machinations of the two doctors, he goes to live with Munificence, sleeping on a couch below an office used by notaries and situated next to a charity school.  Sarduy creates an atmosphere of decay and corruption as Firefly becomes employed as a gofer for the notaries and falls in love with Ada, a beautiful redhead student at the charity school.  Unlike the decadent works of Joris-Karl Huysmans, Sarduy leavens the atmosphere with color and energy.  As Firefly matures, he desires escape from the claustrophobic atmosphere.

The setting is asynchronous, existing in a hallucinatory past, with slave markets, mysterious cults, and Soviet advisors.  A dream logic persists throughout, with patterns repeating themselves, or reconstituting into different identities.  The novel is filled with mismatched pairs, usually one thin and one fat, whether it is Gator and Isidro, along with the two ladies who seduce him.

Along with Reinaldo Arenas (1943 – 1990), Sarduy belongs to the Gay Cuban literary heritage.  Both were expatriates, although Sarduy left in 1960, shortly after Castro dictatorship overthrew the Batista dictatorship.  Firefly is a meditation on exile, a sensual love letter to a Cuba of a childhood imagination, its exuberance and wit poking holes into the gummy haze of nostalgia.  Sarduy misses the Cuba he had to flee, but the hothouse corruption and rot, as evidenced in the notaries, the quack doctors, and the legacy of the nation’s slave trade, remind one that nostalgia can inform as much as delude the writer and reader.  Prior to Castro, Cuba was every bit as hellish for the poor and blacks as after.  Sarduy meditates on the knot of Catholicism, race, and slavery:

The catechumens always returned to their venerable orishas, hidden on the top shelf of their armoires – the inheritance, along with the cinnamon skin and thick lips, of some maroon ancestor if not of a great-grandfather who, being from Africa itself, was respected in the neighborhood as a man black by birth. [Emphasis in original.]

Written in 1990, Firefly can be seen as a parody of the novels of the Latin American Boom and a harbinger of things to come (Roberto Bolaño and Javier Marías).  The novel’s tone and structure have it swinging between a kind of magical realism (the opening chapter involving the hurricane) and long-form dream sequences (the chapter with Firefly in The Pavilion of the Pure Orchid, a Lynchian nightmare in cloying tropical heat).  Sarduy’s verbal richness sets it against the now-standard Magical Realist novels (One Hundred Years of Solitude, etc.) and Bolaño’s tricksy epics like The Savage Detectives and 2666, works exploring the post-NAFTA socioeconomic situation through a combination of flat journalistic prose and gut-wrenching horror and violence.  Sarduy’s pre-Castro Cuba is far from idealized, but he deftly avoids devolving into simplistic agitprop.

An overly nostalgic interpretation of the past can be crippling in its construction of false idols, assuming one doesn’t take Faulkner at his word when he said, “The past is never dead.  It’s not even past.”*  The carnival of grotesques, the decadent corruption, and the dreamlike atmosphere dissolve into a mélange of beauty, cruelty, and comedy.  Sarduy is unencumbered by chronological exactitude and the evangelizing obsession to assert that the past was better.

Firefly and Severo Sarduy are worth the time, especially given Mark Fried’s luminous and playful translation.  Sarduy is a master stylist, his writing radiating the refined sensuality of Jean Genet, the formalist experimentalism of James Joyce, and the verbal richness of Joris-Karl Huysmans.  A gorgeous and decadent seam of literature is revealed in the pages of Firefly, offering yet another aspect of Latin American literature.

One thought on “Translation Tuesdays: Firefly, by Severo Sarduy”