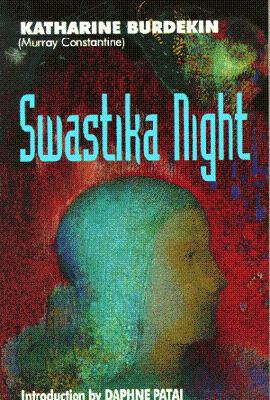 The novel Swastika Night by Katharine Burdekin is one of the most imaginative alternate histories ever written. It takes place in a far future — 500 AH (meaning After Hitler) — with a medieval Europe run by gay Nazi knights who worship Hitler as a god. If this novel were written today, it might have a nice Kathy Acker vibe going for it. It wasn’t written today, it was written in 1937 by Burdekin, a pioneer in feminist science fiction. Reissued by the Feminist Press in 1985, this novel easily stands among the great dystopian novels like 1984 by George Orwell and Brave New World by Aldous Huxley.

But let’s return to the premise and those gay Nazi knights. The novel’s plot centers on an Englishman named Alfred and his pilgrimage to “The Sacred Airplane” that Hitler flew to Moscow to win the “Twenty Years War.” In this medieval Europe, history has been altered beyond recognition. Hitler is worshiped as a muscular blond god and Nazi knights serving as administrators. In Daphne Patai’s introduction, she tells how “All books, records, and even monuments from the past hav[ing] been destroyed to make the official Nazi ‘reality’ the only possible one.” The plot hinges on Alfred discovering a photograph of Hitler with a girl.

Making the enforcers of this civilization gay knights bring up several fascinating historical parallels. While using the term “gay Nazi” seems needlessly sensational, there was a gay subculture within the Nazi apparatus. The SA — the Sturmabteilung (Storm Detachment) — were the official bodyguard unit and political street fighters of the Nazi Party. Ernst Roehm, a gay man, ran the organization until his murder during the Night of the Long Knives in 1934. During its heyday, the SA attracted many gay men. While Nazism persecution of gays is no secret, the SA’s link to Germany’s older gay military heritage is probably less well known. Prior to German unification in 1870, the Duchy — and later Kingdom — of Prussia espoused a gay military subculture. (We can look back even further to Sparta — Zak Snyder’s 300 notwithstanding — to see another culture with a long history of a gay military subculture.)

In yet another strange twist, despite its official homophobic policies, Nazi art was really, really homoerotic. Google Arno Breker and Josef Thorak. These two Nazi sculptors carved monuments to the heterosexual Aryan that came across as Tom of Finland in stone. For those interested in the stranger crevices of Nazi aesthetics, check out Art of the Third Reich by Peter Adam. While I believe that there is such a thing as Nazi art, I’d summarize it as equal parts neoclassical gigantism and sexually confusion.

While today the gay knights might seem a tad homophobic on Burdekin’s part, it plays into her assertion that the cult of masculinity is warlike and destructive. On the flip side, in her utopian novel The End of This Day’s Business, written in 1935, has the world run by peace-loving women and men, stripped of any political power, engage in war games as a kind of harmless sporting event. Set against the historical record, Burdekin’s vision is not far from the truth. The knights despise women because of their ungainly appearance. Used for nothing more than breeding purposes, women have no status beyond that of satisfying animal needs. This reflects the SS’s plan to incentivize women to have lots of racially pure babies. Unfortunately, for Hitler, the traditionalist German populace found this rather unseemly and distasteful. But the novel shows how adoration of the mother — and the Third Reich was all about worshiping the German mother — can easily warp into a dehumanized program of breeding and rape.

So what does it mean to be human? In the case of Swastika Night, we realize that one’s humanity is based on political power. Women are excluded and Christians are persecuted. Following the extermination of the Jews, the Nazi knights moved on to the Christians, since they practice a religion contrary to the state-sponsored worship of Hitler as the one true god. Since state and religion are one, Christian practice is treasonous. What does it mean to be human? By having the power and the means to determine who is not-human. Unlike Iain Banks Culture novels, yet eerily similar to the tie-in novels of Warhammer 40K, humanity is an exclusive club. All who belong get great perks, all who are not human face extermination.