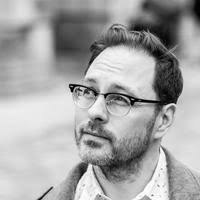 Matthew Tierney is the author of Midday at the Super-Kamiokande. The author of three other poetry collections, he lives in Toronto. I reviewed the book here. In this interview, Tierney and I talked about reason, John Ashberry, and working with Coach House Books.

In Midday at the Super-Kamiokande, you exhibit a wonderful interaction between wordplay and upending rationality. Is this poking fun at the concept of rationality or is there more at stake?

Oh, there’s a lot at stake. Everything, really, when you’re talking one’s conception of the world/universe around you, how it came to be, where meaning resides, whether reality is consistent, the experience of the sublime—whether God, or a creator, or Prime Mover or something exists as answer to the question, “Why is there something rather than nothing?” I could go on.

Much of this book is informed by existentialist thinking, which seeks to upend the purely rational approach to meaning-making. The great promise of reason is certainty by way of proof. But the application of reason in science, for example, which is foundational and generates demonstratable knowledge, doesn’t play out with other modes of inquiry—ethics, say, or ontology. To cut to the quick, it sure doesn’t indicate how we experience a poem!

So you’re onto something when you say “wordplay.” Irony is an effective tool to subvert expectations. The hope is that it’s not merely wordplay, that the irony reverberates “all the way down,” that the disruption of held beliefs becomes an ever-present possibility. It has been said that you need a capacity for irony to even comprehend what irony is, but also that this capacity can expand and lead to a more authentic (in the existentialist sense) you. A person should never assume they are a fixed entity. One of Midday’s poems, “Comedown with Comeuppance” ends with the speaker missing the final stair in descent. That feeling of sudden realization—we’ve all felt it—can be seen as a physical enactment of the uncanny, the moment of making-strange, the disruption that’s an impulse behind all the poems.

Was John Ashbery an influence in your work?

It doesn’t need to be said, but I’ll say it: John Ashbery casts a long shadow. I find the trick with Ashbery is to fend off his influence, because it’s tempting to try an Ashberian line, why not, it’s so inviting, so hypnagogic—but any attempt inevitably turns out second-rate. Actually, I’d take second-rate. More likely it’s fourth or fifth. Anyway, it’s true, I kept rereading Shadow Train (long shadow, indeed) during Midday’s composition; the Ashbery sweet spot for me begins with Self-Portrait through to A Wave. I’d tasked myself with creating disjunctive movement in a short poem without fragmenting syntax (much) and needed a way forward. Rae Armantrout’s discrete stanzas had something to tell me, too.

How was it working with Coach House Books?

Coach House is everything you want in a publisher. They want to make their authors happy, and one wants to be happy, right? With CH, this starts with the editing and extends to the product itself. Over my three books with them, I got to work with two of Canada’s best poets, Kevin Connolly and Karen Solie. My cover ideas were solicited; the last two covers were by artists I pitched. I have strong feelings on typography, and they’ve always been considered, if not acted on. Indie presses have financial limits, of course, and this is poetry, but I’ve never had complaints about touring opportunities, etc. Mostly, if I have an idea for something, it’ll be listened to.

Who are some other poets worth looking into? (Canadian or otherwise)

A friend of mine says you can get two kinds of inspiration from reading a book. One is, ‘Hey, I can do that.’ The other: ‘Holy shit, how did they do that?’ Here are some poets that have written recent books from category number two, Canadian or otherwise: Geoffrey G. O’Brien, Dobby Gibson, Ange Mlinko, Aisha Sasha John, Adam Dickinson.

What can you tell me about your writing process?

I can tell you it’s changed. This book was written after the birth of my son, which put a crimp in my carefully cultivated writing habits. I mean, the birth of my son did other things, infused the universe with meaning etc., etc., but it also put a quick end to late nights and sleep-ins, plus time off work—even the possibility of time off, which can be as powerful a catalyst. It used to be I could plop myself before a blank screen without much beyond the stray research note and just see what came out. But with Midday I made an effort to carry “poem potential” around in my head for the duration, jotting lines/observations when they occurred, either for the poem currently on the go or the next one. The poems were accrued rather than, say, dumped from my brainpan like an ENTIRE STORAGE BOX OF LEGO when you only need one bitty piece. Sigh.

I always triangulate my process according to the nature of the poems, my current life circumstances, and the path of least resistance.

Do you have any words of advice to aspiring poets and writers?

Also: don’t confuse success with publication. The drive to get something out there is strong, particularly if your peer group is trading sneak peeks of their covers. Ouch, right? Stay fast. The first book is such an opportunity. Better to have no book out than a mediocre one.

Never buy someone’s book just because they asked you to.