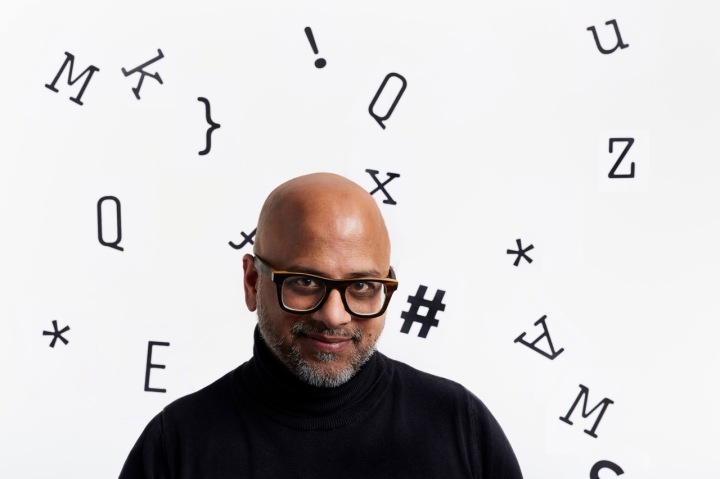 Writing poetry based on three-letter airport codes seems a bit daunting. How did you go about the process?

It certainly was daunting – sometimes it felt impossible – but the allure of actually creating something ‘finished’ under the constraint was a big motivator for me. At first, I went a website that had a list of airports, which I then printed out in its entirety, and circled every three letter word that I recognised. I was able to draft a few lines here and there, and eventually wrote a sentence: EVA AND BOB ATE ALL THE PIE, at which point I thought, ‘hey, maybe this IS going to work, after all!’

I then realised two things about my original process: 1) the list I had printed wasn’t exhaustive, and 2) I didn’t know all of the three letter words in the language. To solve the first problem, I started using the IATA’s own database of airports, and then I had to crosscheck anything that might have been a word against the dictionary – in that process, I discovered a whole bunch of new words (like DZO, for instance – which is the hybrid of a cow and a yak).

What followed after that was a long period of trial and error – I’d come up with an idea for a poem, and discover that the constraint wouldn’t let me say it. For every poem in SKY WRI TEI NGS, there were dozens of failed experiments – which was disheartening at times, but it also made the ones that ‘worked’ even more fun and interesting for me (and hopefully the reader, too).

The maps were a collaboration with my brother-in-law. Matt Stephenson is a GIS specialist, and is able to visualise data, essentially (I hope that’s fair to say, Matt!) – what we did was record the geo-data for every airport that qualified for the project, and then Matt was able to plot those airports on a map of the world (and in a variety of different projections), and ‘connect the dots’, so to speak. I really love them, and I don’t think it’s an overstatement to say that there would have been much less (if any) interest in this book without Matt’s contribution – the maps really make the concept take off (pun intended!) – you can download (for free) a huge map, with every airport in the book (and more) and have a go at writing/mapping your own skypoems here: https://chbooks.com/Books/S/SKY-WRI-TEI-NGS

Can SKY WRI TEI NGS be considered an Oulipo text?

I suppose there are comparisons to be made, but I wouldn’t presume to be anywhere near as technically brilliant as the Oulipeans. But what I think leads people to ask this (and you’re not the first) is the ‘potential’ part of ou-li-po. Things like SKY WRI TEI NGS are a way of ‘finding’ poems that are kind of already out there – in other words, there’s a potential for poetry/literature embedded in the fragments of language that already surround – I’m just recombining them/highlighting those fragments, and trying to make them ‘meaningful’ again, but differently, if that makes sense.

How did you arrange the poems? Parody, commentary, and wordplay are in abundance.

I put a lot of thought into the structure of the book as a whole – it opens with a quotation from Orville and Wilbur Wright’s book on building the first airplane, and from there, I tried to make the book ‘teach’ you how to read it. So there are multi-syllabic words, set off on their own (like MIG RAT ION), and then I do quick experiments with sound, and pattern, and after a while (I hope), the reader gets comfortable in all the odd reading strategies I’m demanding, at which point we can all relax and let the poems get a bit longer and more complicated. Well, that was the idea – I’d be curious to know if we were successful!

How was it working with Coach House Books?

I’ve been a fan of Coach House from the moment I picked up one of their books – I think it was The Martyrology (I always end up coming back to bpNichol, sooner or later, it seems). To me, it’s hard to imagine Canadian poetry without CH. So, when they came to me with an interest in publishing SKY, I was absolutely floored, and I still am. It’s quite literally a dream for me. Alana, Ricky, Crystal and the whole team, printers, layout, marketing, you name it – they were uniformly fantastic, but especially my editor, Susan Holbrook. Coach House has been incredible – there was a book tour with derek beaulieu and Tess Liem and Matt Tireney in Ottawa and Montreal and Toronto, and now they’ve invited me to be part of the poetry advisory board, so now I’m getting to contribute to my favourite press in the whole world. I sometimes can’t believe my luck.

Who are some other poets worth looking into? (Canadian or otherwise)

For sheer lyric: Mary Jean Chan’s latest book, Flèche, and Ilya Kaminsky’s Deaf Republic. For fans of constraint, look up Anthony Etherin’s Penteract Press – he publishes some really mind-bending stuff, including his own experiments with palindromes and anagrams. I’m really excited about one forthcoming Coach House book, but I don’t think I can say anything as of this writing. I’m also really into Wayne Holloway-Smith, and I’ve just read a cool chapbook called ‘Endorse me, you Cowards!’ by a writer in Scotland by the name of Ross McCleary.

Do you have any words of advice to aspiring poets and writers?

It’s not mine, but I’m sure derek beaulieu won’t mind me poaching his words on the matter, which is to say: draw a map of what you think writing IS, and then take another step, into uncharted territory. That’s the fastest way I know to develop as a writer, at any stage. Oh – and share your work with as many people as you can (read it in public, go to workshops, start your own writing circle, etc) – that’s the other way to speed up your development!