The Federalist Society: the Resurgence of the Judicial Conservatism

In the long and storied history of the United States, conservatism suffered two major blows in modern times. The first was the Great Depression and President Herbert Hoover’s intransigence. The Republican president believing that the market would right itself without heavy-handed government meddling. Hoover’s miscalculation created the groundswell for the Democratic Party’s decades long domination of the executive and legislative branches. The second major blow was the constellation of scandals known as Watergate. Whereas Hoover’s failure to act discredited the economic foundation of conservatism (laissez faire capitalism), Watergate exposed a corruption and moral sickness at the epicenter of the executive branch. The constitutional crisis and Nixon’s authoritarian paranoia made the party of Law and Order seem comically hypocritical. (Understandably, there are multiple causes and multiple interpretations one can find in explaining both the Great Depression and Watergate. But the point of this essay is to underscore how the ordinary American citizen comprehended these crises.) Jeffrey Toobin’s The Nine highlights the conservative comeback and how a grassroots movement worked towards creating a comprehensive plan to take back the judiciary. In addition, the conservative comeback can be further understood by the in-depth investigation of the Burger Court and its ideological turf battles as chronicled in The Brethren.

The groundwork for the conservative comeback occurred with the Federalist Society, a conservative and libertarian think tank devoted to judicial issues. Toobin illustrates the agendas of the Right and Left in very practical terms. In 1982 the Federalist Society galvanized young conservatives into action, while the Left became preoccupied with Comparative Legal Studies. The difference is striking. Reeling from the double-punch of a discredited economic system and the morally questionable actions of President Nixon, conservatives sought one thing: power. As opposed to the armchair discussions and morally self-righteous complacency of Comparative Legal Studies, the Right is to be commended for its program and its call to action. Like it or not, results only occur when power is attained, be in the legislature, the Oval Office, or the judge’s bench. One can have a comprehensive ideological outlook and sensible solutions to social problems, but if one isn’t connected to those with power, then it is rather pointless. One can have demonstrations and petitions and eloquent public speeches, but if one can’t change the laws one is protesting, what are you doing out there?

The clarion call of overturning Roe and the Federalist Society’s agenda of limited government created a formidable opposition to the entrenched Democratic establishment. Following the disastrous presidency of Jimmy Carter, the Age of Reagan allowed for a full-on assault of political liberalism in both economic and social spheres. In terms of the public’s imagination, Reagan pushed back against the onslaught of FDR’s New Deal and LBJ’s Great Society. “Ask not what your country can do for you,” turned into “Government is the problem not the solution.”

The Brethren sums up the conservative position in this brief description of Justice Rehnquist:

And they [the liberals on the Court] when Rehnquist began promptly to live up to his advance billing as a solid conservative vote, siding invariably with the prosecution in criminal cases, with businesses in antitrust cases, with employers in labor cases and with the government in speech cases.

Through Nixon, Ford, and Reagan presidencies, the Right had created a political atmosphere conducive to nominating conservatives to the judiciary. Once ensconced on these benches, it provided future opportunities for nominations and promotions. The Federal judiciary became a minefield for any case involving liberal causes.

MARTIN: It’s a revolution in Washington, Joe. We have a new agenda and finally a real leader. They got back the Senate but we have the courts. By the nineties the Supreme Court will be block-solid Republican appointees, and the Federal bench – Republican judges like land mines, everywhere, everywhere they turn. Affirmative action? Take it to court. Boom! Land mine. And we’ll get our way on just about everything: abortion, defense, Central America, family values, a live investment culture. We have the White House locked till the year 2000. And beyond. A permanent fix on the Oval Office? It’s possible. By ’92 we’ll have the Senate back, and in ten years the South is going to give us the House. It’s really the end of Liberalism. The end of New Deal Socialism. The end of ipso facto secular humanism. The dawning of a genuine American political personality. Modeled on Ronald Wilson Reagan.

And the key to landing conservative justices in these positions was the Senate Judiciary Committee.

There are few places in our government where all three branches converge. One of them is the Senate Judiciary Committee. It’s importance cannot be underestimated. The committee plays the role of advise and consent on the President’s nominees for judicial posts, most importantly those of the Supreme Court. It is the greatest manifestation of checks and balances between branches. The importance can be seen in what is at stake for all involved. For the President, successfully nominating a candidate for Supreme Court will allow the President to have influence when his or her term or terms is up. (One can see this is the liberal legacy of FDR’s appointees.) For the Senate, it is a chance to wield its power. They are a guaranteed stopgap against executive overreach. The Senate fought back when FDR pursued his ill-fated Court Packing scheme. Added to this political calculus is the nature of the Supreme Court position itself. First, these are lifetime appointments. (Unlike, say, the Federal Reserve Chairman who needs to be appointed and re-elected to the position.) The lifetime appointment is coupled with the microscopic nature of the Supreme Court. Unlike the 535 Representatives in Congress and the 100 in the Senate, there are only nine Supreme Court justices. Congressional appearance fluctuates with the attitude of the electorate. The Supreme Court is (allegedly) immune from the winds of public opinion and popular electioneering. The Nine chronicles the longest period without a change in the Supreme Court’s make-up (1994 – 2005).

In recent years, the Senate Judiciary Committee’s hearings for Supreme Court nominees have been televised, turning the TV-watching populace into amateur Court watchers. Newspapers, magazines, and more recently the Internet become abuzz with speculation, hysteria, and analysis. Nominees are confirmed, others denied. Over the past decades, the hearings have taken on a different pallor. Instead of denying nominees for being too conservative, nominees have been denied for not being conservative enough. Hence, the Senate Judiciary Committee becomes a kind of ideological litmus test. The slow transition from a liberal-leaning Supreme Court to a more conservative-leaning Supreme Court has taken decades. This has also changed the mindset of the electorate, the Congress, and politicians. The events of 9/11 cemented a rightward tilt in the populace, at least until the economic meltdown of 2009, again putting the free market fundamentalists on notice.

Toobin, to his credit, illustrates the importance of the Senate Judiciary Committee and the rightward tilt of the judiciary throughout the Seventies and Eighties. But he seems to put to much emphasis on ideology alone. Because the Supreme Court is such a small government body, demographics also plays a key role. The Supreme Court will always be a body given to firsts. Amidst the recently confirmed nominees, the Supreme Court has seen its first female Hispanic justice. And now the Supreme Court has a majority of Catholic justices. Now there are six, instead of three. This has given the secular-minded pause. Alas, anti-Catholic hysteria has followed these nominations, especially in more extremist circles. 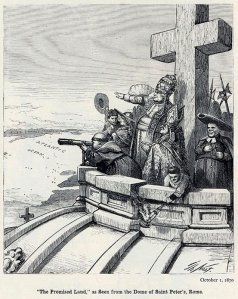 The Court’s nominal Catholicism should not be caricatured. While it is too early to tell what the judicial philosophy of the newer Catholic appointees will be like, one shouldn’t characterize the Catholic justices as a religious monolith. There are left-leaning Catholics (Sotomayor) and right-leaning (Scalia, Thomas, Alito, Roberts, Kennedy). So let’s play the demographics game: Scalia, Thomas, and Alito form a solid conservative bloc. Sotomayor, Kagan, and Ginsburg are women. Kagan, Ginsburg, and Breyer are Jewish. And Kennedy, Breyer, and Souter are reliable swing votes. The best way to comprehend the votes of the Court is to consider not just ideology, but the race, sex, and religion of the nine justices. 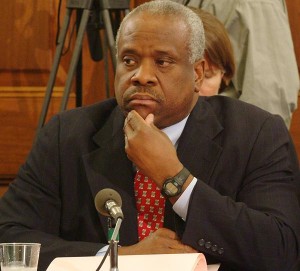 Affirmative action was designed to keep women and minorities in competition with each other to distract us while white dudes inject AIDS into our chicken nuggets.

The Trouble with Clarence Thomas: the Contradictions of Modern Conservatism

Nominated by President George H. W. Bush and confirmed by the Senate to replace the vacant seat of Justice Thurgood Marshall, Thomas appeared as the polar opposite of Marshall. Ironically, it is these ultraconservative values that make him such a contradictory figure. Thomas adamantly opposes affirmative action, yet his entire career has been based on its tenets. A devout Roman Catholic and crusader for family values, his nomination was one of the most controversial in decades. Amidst allegations of sexual harassment and of renting porn videos, his nomination was confirmed. Added to this rather curious interpretation and practice of Catholicism, he is a die-hard advocate of free market capitalism. In addition, in speaking engagements, Thomas has repeatedly mentioned his disgust at “the elites,” the wonderful catch-all term beloved to Right and Left. It is ironic, since Thomas, a Supreme Court Justice, is a member of one of the most elite institutions in the United States government. It seems his high position and ideological extremism has made him immune to such obvious ironies. Toobin pointed out how Thomas would have his clerks watch The Fountainhead, the film based on the “philosophy” of atheist Ayn Rand.

While Thomas and Scalia are darlings to the Right, their ideological extremism makes them only so useful in the decision-making process of the Court. In the operations of the Court, strong decisions happen when there is a consensus (Brown v Board, Nixon v U.S.). Divided opinions are more contentious (Roe v Wade, Bush v Gore). In the end, an agenda must be taken: remain faithful to one’s ideological base or get things done. Chief Justice Roberts has now received the ire of the Tea Party because of his consensus-building activities on the bench. But in the end, the Supreme Court, like all political entities, derives its prestige not from passing arbitrary ideological purity tests, but from getting results. The words of the fictionalized Roy Cohn seem apt, “You want to be Nice, or you want to be Effective? Make the law, or subject to it. Choose.”

Ideology provides a comprehensive philosophical framework for political action and social change, but without those in power getting their hands dirty it remains useless, a bauble, a hobby, a passing fancy.

Up next, Supreme Court Longrunners

One thought on “Mondays with the Supremes: Part VII: The Ideological Litmus Test”