I met Don Vort at a recent Network After Work event in Milwaukee. He showed me a card trick and told me about his film in production. I told him about my blog and freelance writing career. Business cards were exchanged and we had a great conversation. This interview expands on that conversation.

The 34 year old Don Vort is a loving husband and father of two. The founder of DV Magic Services works as a professional entertainer in many forums, including magician, stage actor, and social coordinator. Prior to going into professional entertainment, I worked for years in manufacturing, specifically on CNC machines.* He is currently writing and producing a Steampunk movie retelling of the King Arthur story set in an alternate version of Victorian England. It is set to hit theaters in 2018. If you think that movie idea sounds cool, you can help support it. Don’s Go Fund Me page is at: Sundering The Worldgate

*Since I don’t know what a CNC machine is, I ask Don to explain.

DON VORT: The alternate history of this world is actually more of an alternate version of this world. In the world that this film takes place sorcery and alchemy are one and the same and are predominately practiced by educated individuals that study in either London or Paris. Due to the Matriarchal nature of this world, education of this manner is almost exclusively limited to female students since men are viewed as primarily useful as laborers.

The specifics of this film, itself, take place in England where the queen and her French adviser are seeking to find when she will produce an heir. They use a powerful otherworldly artifact to attempt to foresee the future of the line. What they find is a prophetic vision of the house of one of her cousins rising up to overthrow her before an heir can be born. The queen takes actions against that house, eliminating them from any form of contention for the throne.

Our main character is the sole survivor of that house, who seeks vengeance against the one responsible for killing her parents. (Interesting twist, the parents were actually murdered before the queen’s forces could enact her will against them.) The main character is guided by a group of outlaws (Knights of the Round Table) and a pair of otherworldly sorcerers (Merlin).

DAR: You sound like you wear a lot of hats (actor, screenwriter, social coordinator, etc.). How did those different roles develop over your career?

VORT: I do wear a lot of hats in this particular endeavor, but I also hand off these hats to various people working together with me to bring this vision to the big screen. I am an actor, but not the main actor. I am also willing to recast the character that I intend to play if my abilities on screen don’t translate well to the vision of the film.

I am writing this and putting most of the story together, but I have a team of people who proofread for consistency and quality. These other people don’t just tell me when something doesn’t work well, but they often provide alternative versions to the scene that I’ve written and even sometimes suggest either introducing another character, or writing a character out the film altogether.

As far as directing and producing, I do most of this myself because this allows my vision to suffer the fewest modifications beyond what is necessary to tell the story well. Even in this, I rely on others to help with this load. I have an assistant director whose main purpose is to direct the scenes that I act in and to coordinate peripheral scenes and actions of extras. I also have two individuals working on combat/athletic choreography. One is a martial arts instructor, the other an avid practitioner of swordplay ranging from medieval all the way through to Victorian era. On the Producer side of things, my business is the primary funding force on this film, but I’ve also reached out to other entrepreneurial venturists to further our financial abilities.

I also have other individuals who are volunteering time and resources in set design and construction, special effects, wardrobe, make-up, props, etc. I wear many hats, but I think of myself as the hat stand where the hats rest until the right person puts it on.

To answer the second part of your question, over the course of my career, I’ve worked without direct oversight in manufacturing and service industries. I’ve learned to find the best solution quickly and when it’s time to ask someone with more experience to help out. When I went into performance as a career rather than a hobby, I already had a work ethic that allowed me to stay focused without need for approval or the threat of discipline. I learned that you can’t just call yourself a performer and expect work to find you. There is relentless marketing to get your name out there, and hours upon hours of practice to get the performance just right. I would say that over my career, diligence and determination have allowed me to grow into the professional that I am today. Also, once there’s an idea in my head, I nurture it to see where it will go. I never dismiss something outright. I’ve plenty of ideas and plans that never come to fruition, but I always give them a chance to grow into something beautiful.

DAR: What are the biggest challenges to creating a Steampunk King Arthur story in Milwaukee (as opposed to Hollywood)?

VORT: I would say the biggest challenge is the lack of interested parties. There aren’t a lot “ready sets” that can be used or modified, nor do most people who are trying to get into the movie scene come to Milwaukee to get there, with the exception of the film festivals. Even those individuals are usually hoping to use Milwaukee as a stepping stone to get to something bigger like Hollywood or New York.
Aside from that, I don’t think there’s much difference no matter where you go. I have found numerous sites with the right type of scenery for this movie. There are a variety of places for filming and rehearsing. I feel the biggest challenge is simply that I have to look harder to find what I need. The number of Steampunk artists that exist in the Milwaukee area is amazing, the number of acting troupes that are excited to take part in this project.

DAR: Who are some of the key players in the film? I heard Professor Pinkerton (from Dead Man’s Carnival) is involved? 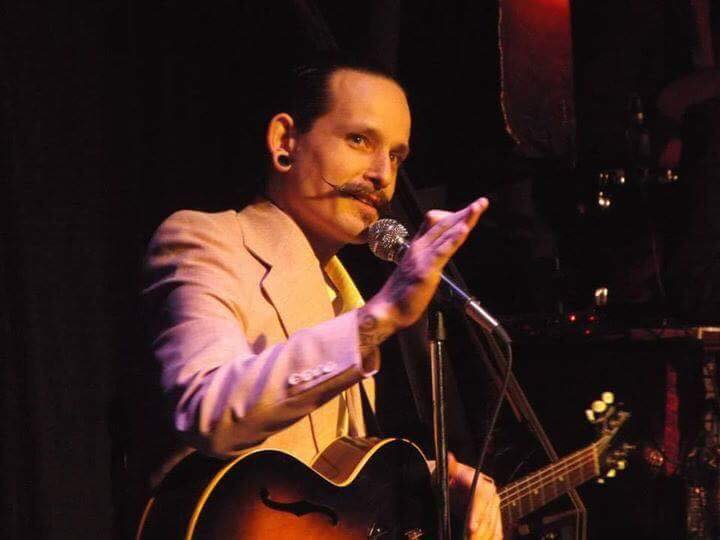 VORT: Sadly, Professor Pinkerton and Dead Man’s Carnival have had to withdraw from this project do to scheduling conflicts. They are doing extremely well as a musical group and in performance in general that they do not have time to compose the music for this film. I am currently in communication with Melora Creager, of Rasputina, about composition for a score for this movie.

Jeff Quirk, of Karate America, is my combat choreographer. Scott Norris, of Scott Norris Photography, is my special effects designer. There are various other individuals who would prefer not to have their names made public yet who are involved in this. As I stated earlier, I have several teams of people who have stepped up to fill whatever role is needed.

VORT: A CNC machine is a manufacturing machine. It stands for “Computerized Numerical Control” Basically, it’s a machine that is hooked up to a computer and uses a program to know what speed to move the cutting spindle at, where to cut, what tool it’s using, etc. This type of manufacturing allows consistently identical parts to be made with significantly less physical labor on the part of the machinist who is making the parts. There is a lot of technical knowledge that goes into running these machines, and programming them, but they have revolutionized manufacturing. Even the robots that work the assembly lines for building cars are a version of a CNC machine. CNC machines can be mills, lathes, autoloaders, robots, and a variety of other machines.

DAR: For visitors to Milwaukee, do you have any recommendations for a night out?

VORT: If you’re visiting Milwaukee, my recommendations would greatly depend on which night and what your interests are. If you’re in town on a Thursday night, go check out Shakers cigar bar downtown. That’s were Professor Pinkerton plays, and his music is absolutely amazing. If you’re looking for somewhere to go on a Friday, I would suggest driving a little ways out of Milwaukee to AJ’s Irish Pub in Menomonee Falls for, in my humble opinion, the finest fish fry in southeast Wisconsin. And if you happen to find yourself in Madison on a Friday or Saturday night, check out Atlas Improv group near the capitol. That is where I studied improv and the performers there are among the best I’ve seen/worked with.

DAR: What’s the best part about being a Milwaukee entertainer?

VORT: The best part about being a Milwaukee entertainer, actually the best part of being a live entertainer anywhere, is that you get to perform for people from all walks of life. I’ve had a chance to meet such a variety of people both on and off the stage. There’s always something you can learn from other people and if you limit the types of people you interact with, you limit the lessons you can learn. America is a melting pot of cultures and personalities. If you don’t taste it all, you’ll never know the flavor of the whole country.

DAR: Where do you see yourself in five years? What would be your ideal career trajectory?

VORT: In five years, I see myself helping others find their path in this world, whether it be serving, entertaining, or building. My ultimate goal with DV Magic Services is to take entertainers and help them get started. My goal with this film is to show that anything is possible when you surround yourself with the right people. My goal for my personal career is to never lose focus on where I came from and how hard I have to work to attain it.

VORT: Keep at it. For every “no” you hear, there’s someone out there that will say, “yes” or at least say, “tell me more.” Always remember that if you don’t ask, the answer will always be “no.” And always remember that the key to succeeding in business is building relationships. Relationships aren’t just “how can you help me,” but more “how can we help each other.” Don’t just use someone for your own goals, or that person won’t help you again. There’s give and take in each relationship, find out what you can give before trying to take. The professional friendships you make will ultimately be the ones that stick with you throughout your career.

DAR: Any local shout-outs the readers should know about?

VORT: I feel like all the shout-outs I could make have already been made. Just like to thank you, Karl, for giving me the opportunity to talk about my film here. If your readers have any further questions for me, I’d be happy to answer them. And if anyone would like to touch base with me about this project or even just to begin a professional relationship with me, I’m always willing to talk.