MP Johnson Week continues with an interview with, you guessed it, MP Johnson.

MP Johnson has been interviewed before at The Driftless Area Review. On that occasion, we discussed his work The After-Life Story of Pork Knuckles Malone. Tomorrow I will review Johnson’s newest novel, Dungeons & Drag Queens for The Chicago Center for Literature and Photography. For his second interview, we discuss drag queens, Green Bay, and the fate of humanity.

As RuPaul says, “Drag is punk rock.” Just putting on the opposite gender’s clothes and fucking with gender norms is still dangerous, subversive business. But these girls step over all of that and turn it into an art form that is actually a bunch of different art forms rolled into one: makeup, fashion design, choreography, comedy. Now there’s less and less lip-syncing and more drag queens are writing and singing their own songs. Last year, Sharon Needles put out a record called PG-13 and it was my favorite album of the year. A lethal combination of punk and pop and awesome. I just love the art of drag and drag queens.

What is your response to those who accuse this work of being homophobic and you’re making fun of drag queens?

I think those accusations come from a place of ignorance. Anyone who has read Dungeons & Drag Queens can see that I have total respect for drag queens. Hell, just look at the cover. Sleazella LaRuse, the main character, looks fucking fierce. 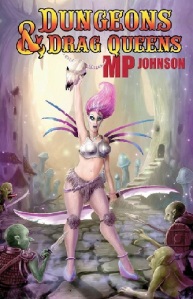 I’m not concerned so much about these accusations. What I’ve found most distressing is that I’ve gotten messages from homophobes with suggestions about how I can better trash drag queens and trans women (which, by the way, are not the same thing, although some seem to use terminology interchangeably) in my next book. Just kind of shocking. Of course, if these slimeballs actually knew how to read, they’d quickly realize that I’m not on their side. It just grosses me out that they would think I am.

What does it mean to be “fierce”?

This is your second book set in Green Bay, Wisconsin. What makes you want to write about Titletown and its denizens?

I moved to Green Bay straight out of college. I was a confused and naïve kid. I thought GB was a big city with culture and things to do. Well, they had the Concert Café, which was the hub of punk rock in Wisconsin in those days, but it closed down soon after I moved to town. Then I ended up working at factories and call centers for six years of my life before I decided to move to Minneapolis.

I still love Green Bay though. There’s no place else quite like it. My books really only graze the surface of GB culture, which is quite distinct and obviously very football-centric. I’d like to dig into it more in the future. It’s a small city unified almost entirely by a single element: The Green Bay Packers.

For some people there, that’s all they’ve got, and that’s sort of sad, but it’s also better than nothing. And it’s turned into a common language. If you can talk Packers, you can talk to anyone in Green Bay. It’s unifying. Unfortunately, I couldn’t talk Packers, which frequently left me feeling alienated when I went outside my friend group, which was mostly punks and weirdos. I had a lot of trouble at the factory I worked at because I wasn’t a sports guy, and my career there ultimately ended with some guy threatening to stab me with a box cutter.

Now from an outsider’s standpoint, I do feel like sports fandom in other cities is kind of bullshit compared to GB. Yeah, in the Twin Cities, there are fans of the Twins and the Vikings, but they don’t compare. There’s other stuff to do here. People here like the Twins, and this, and that, and some other stuff. People in Green Bay don’t have much of that other stuff, but they’ve got the Packers. On game day, probably eighty percent of the population is wearing green and gold. Houses are painted green and gold. And the Packers aren’t the usual bullshit corporate sports team either. It’s a community owned team, and the community has embraced that team to the extent that, if you fuck with the Packers to a Packers fan in GB, you’re not just fucking with someone’s fandom, you’re fucking with a person’s way of life.

I used to really hate all of it. It all seemed so pointless to me, watching some dumb sports guys do sports shirt. It didn’t seem participatory or creative, not like punk rock. But it brings people together in the same way, and sometimes it instigates creativity in surprising ways. My friend’s dad took his love of the Packers in a really creative direction. He put out a book of Packers poetry. There is some heartfelt shit in that book. So yeah, the Packers bring people together and bring out good in people, maybe not the way I’d like as a snobby punk rocker, but they do the job and that’s a positive thing.

You publish a ‘zine called Freak Tension. With the Internet approaching twenty years old, why bother publishing a ‘zine?

I’ve been thinking about this a lot lately. I probably won’t publish another issue of Freak Tension for a long time. Maybe never. I’ve been doing FT for more than fifteen years now, since the Internet was in its infancy, and I just put out the fifteenth issue in December. It’s easily the best issue yet, with a beautiful cover by Bill Hauser. It contains some of the best nonfiction writing I’ve ever done. There are two pieces I’m particularly proud of. One is on GG Allin. The other is about this kid who was my literary arch nemesis when I was growing up. We would have ridiculous writing battles that eventually turned into fistfights. Unfortunately, I’ve only sold a handful of copies. I can only assume nobody gives a shit. Which is kind of crushing, but it’s okay. I’ve got other stuff to write.

The truth is that a lot of what I do is illogical and compulsive. On the front end, there’s very little thought about whether anyone will give a fuck. I just decide that it would be fun to do a new issue of the zine or to write a story or whatever, and then I have my fun. It’s very selfish. Something about writing and then physically putting together a cool looking zine makes me feel happy. Same thing with writing a story. When I’m done having my fun, I start to think about getting my creation into the hands of other people. I don’t know why I want to do this. On the one hand, it seems like the logical step. On the other hand, it’s a great opportunity to have someone piss all over something that has been super fulfilling and positive for me. But to be fair, a lot of my stuff has gotten a great reception, which kind of blows my mind.

We’ll see what people think about this Taylor Dayne tribute zine I’m putting together though.

How has your relationship been with Eraserhead Press?

Super exciting. Eraserhead Press is really the foundation of the bizarro fiction movement. Rose O’Keefe, the owner, and everyone who works there is committed not only to putting out badass books, but to creating a community of writers and fans. They run Bizarro Con in Portland every year, and it’s just this big awesome party filled with people nerding out about books. Just the coolest. The world needs more book parties!

What does bizarro literature mean to you?

The discussion about defining bizarro literature seems never ending. The common ground is the element of surprise. When you read a bizarro book, you are going to be surprised, not just once at the start, but throughout the book.

But to me, the bizarro genre is really about community. This is not just isolated independent authors and publishers spitting out books. This is a bunch of people who respect each other working together to create something awesome. Little by little, that community is growing. It grows every time me or one of the other authors or publishers tables at a convention and gets a book into the hands of some kid who says, “Man, I don’t really read much but this looks crazy so I have to give it a try!” It’s very punk rock in terms of how community oriented it is. It’s not just about the books in the same way that punk isn’t just about the records.

What have been the best and worst experiences thus far promoting Dungeons & Drag Queens?

Promoting books is the most mysterious, frustrating and fulfilling thing in the world. I can’t pin it down to one best experience, but doing this is really positive for me as a person. I really love tabling at conventions. I’m not always the most social person and sometimes I have trouble leaving my shell. When I do a table, I can have sort of structured social interactions. I can have awesome conversations about books and movies and music and weirdness. I’ve made a lot of new friends promoting Dungeons & Drag Queens and the previous book, The After-Life Story of Pork Knuckles Malone, and that’s way cooler than just selling books.

The worst experience is easy. I set up a reading in a city far away. I spent a ton of money on advertising. I did everything I could think of to get people to turn up. Only two people came to that reading. It kind of broke my heart. But on the other hand, I had great conversations with the people who showed up and I learned a valuable lesson about the effectiveness of advertising.

In your own professional opinion, is humanity doomed?

Nah. The good guys will win in the end. We just need to figure out who the good guys are first.

Any parting words or advice?

Break your shoes in at home. Especially if they’ve got five-inch heels.

One thought on “MP Johnson Week: The Interview”