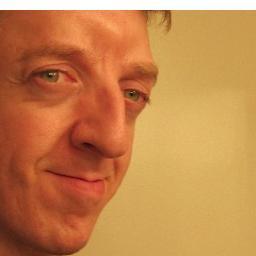 I recently reviewed MP Johnson’s bizarro lit novel, The After-Life Story of Pork Knuckles Malone, a touching tale about a boy who runs away to Green Bay, WI with his favorite pig, Pork Knuckles Malone. I had the privilege of seeing MP Johnson perform live at CONvergence in Bloomington, MN. He read an excerpt of his novel as well as his short, “Berserkoids are here!” We talked about the bizarro genre, pork products from Aldi, and why Lloyd Kaufman hasn’t called.

What inspired you to write The After-Life Story of Pork Knuckles Malone?

The germ of the idea started with a flyer for a Big Eyes show by Twin Cities artist Claire Monet. The flyer featured an image of a ham sitting in front of a wall of old televisions. On the flyer, the ham had branches stuck in it with eyeballs at their ends. In my head though, I saw the ham with antlers stuck into it instead of branches, probably a subconscious tribute to the geek helmet worn by Rev. Norb, the singer of legendary Green Bay punk band Boris the Sprinkler. My ham didn’t have eyes either. Instead, it had a pair of pineapple rings wedged between the antlers that kind of looked like eyes. Then the question appeared: How the fuck did this ham get in front of these TVs? The book not only answers that question, but takes the reader through all of the slimy misadventures that follow that moment.

What makes bizarro literature so fun to write?

It’s the anything goes genre. Readers are looking for fast-paced stories that catch them by surprise, and that’s what I’ve been writing since I first put pen to paper. The genre is perfectly aligned with everything that makes me happy when I’m writing. I can tell a coming of age narrative filled with green slime and bend the narrative at my whim to spend time with barely relevant characters (like a Nazi fly feasting on the title character’s rotting husk) for the sole purpose of amusing myself and then find that chapter was a favorite for many readers. There’s not room for that in a straight horror story, let alone more traditional forms. While there is certainly a high level of craftsmanship in the best bizarro, and you wouldn’t believe the number of drafts I go through for each story I write, there’s less concern with the technical and more of a focus on the energy of it all, the forward movement. And the fun.

What is your favorite pork product?

There’s a really obscure pork product called Porkreenos that I found at an Aldi in Berlin. From what I understand, these little nuggets have an outer shell made out of pressed ham and a gooey filling that’s actually a kind of pudding made out of boiled pig hooves and pig tails. They taste like shit, but splatter in a really cool way when you throw them at a car. Believe it or not, I’m a vegetarian.

Do you have any more creative projects in the works?

I have a constant stream of short stories flowing out of me, more than I could ever possibly have published at this point. My most recent short story, “Lake Street,” appears in In Heaven, Everything is Fine, the David Lynch tribute anthology from Eraserhead Press. Eraserhead is also going to be publishing my next book, Dungeons and Drag Queens, which is due to be released in the not-too-distant future. I am totally honored that people are getting into my writing and publishers are psyched about publishing it. I’m in this for the long haul.

Who are some of your favorite writers and artists?

Clive Barker is a huge inspiration. “Pig Blood Blues” is one of those stories that I can just read over and over. I’m really into Glenn Danzig. I have always loved the imagery evoked by his lyrics and am mesmerized by how terrible his comic book writing is in comparison. Just heavy-handed, hokey goofiness. I’m readying myself to dip into his newest written disasterpiece: a long-form Jaguar God poem with illustrations by the great Simon Bisley.

In the bizarro genre, I’m all over the place. Most recently, I was blown away by Space Walrus by Kevin L. Donihe. Not only does it have all the hallmarks of a bizarro masterpiece, it has an emotional depth that I was not at all expecting.

Has anyone in Hollywood optioned Pork Knuckles Malone? Does someone need to call Lloyd Kaufman, founder and creative genius behind Troma Entertainment?

I’ve been contacted by Jason Statham’s people. They wanted to turn my book into his next action movie franchise. They were going to have Statham play Pork Knuckles, which seemed cool, except they also wanted to replace Daryl, the young boy, with an adult female lead to be played by Milla Jovovich. They floated some big numbers my way, but I told them I was waiting for a call from Lloyd Kaufman. I’m still waiting. Ball’s in your court, Lloyd.

Berzerkoids are here. They’ve always been here. They live inside of you and me, in our hearts.

I wrote a piece of flash fiction called “Berzerkoids are Here.” Initially, I had no intention of performing it at readings. I just threw it on at the start of one because I thought it would help the pacing of the event, rather than me going straight into an excerpt from the book. The crowd reaction was fantastic. Since then, I’ve performed it a dozen or more times. I’m really proud of that story, not only because it’s funny and well-crafted, but because it really works in a live setting. Also, not to toot my own horn, but it’s probably the funniest story about child abuse ever written.