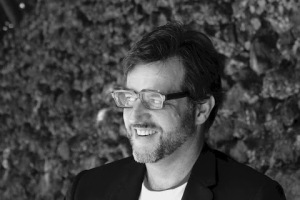 Richard Melo is the author of the new novel, Happy Talk, about gun-toting nursing students and farcical nation-building efforts in Haiti. We discuss nation-building, literary form, and the publishing website Red Lemonade.

What inspired you to write Happy Talk?

It was when I read Ishmael Reed’s novel Mumbo Jumbo, with its government-backed conspiracy to stop jazz dancing (and its origins in Africa via Haiti and New Orleans) from spreading across the U.S as a pandemic. Happy Talk starts as a riff on that premise.

Why tell a story about tourism and nation-building in Haiti?

Nation-building reveals the character of the nation builder. You get good intentions buoyed by misdirection, a desire to control, profit motives, cultural insensitivity — all wrapped up in a neat package that paints a colorful picture of the nation builder. The country on the receiving end of the nation-building, meanwhile, becomes more of a mystery. Plus, I am a big fan of Maya Deren whose Divine Horsemen is an excellent book on Haitin and voodoo possession.

Are there farcical elements to nation-building?

This might sound like a cop out, but I see farcical elements not just in nation-building but anything that takes itself seriously … and nation-building is serious business. You don’t have to pull back far to begin to see its ridiculous elements. Has nation building ever worked out exactly as planned? Is the world better often better off when it doesn’t? This is rich material for satire.

Was there any particular reason you chose to write Happy Talk the way you did? (Unattributed dialogue, pun-like character names, the extended epilogue, etc.)

I never liked the way quotation marks look or how dialogue attribution slows down a conversation. When I started reading William Gaddis, I saw how dialogue could be handled in the hands of someone who really knows how to write dialogue. For me, the two keys to writing dialogue are 1) A line should be so drenched in a character’s personality that it doesn’t need attribution, and 2) much of the time attribution is unneeded because it doesn’t matter who’s saying what.

Names like Culprit Clutch are a tribute to Thomas Pynchon who has a flare for naming characters. For me, you start with a name like Culprit Clutch, and then create the world where a Culprit Clutch lives. You know a bit who Culprit Clutch is before he steps into the scene, just by seeing the name. Outlandish names aren’t implausible. Here in Oregon, there’s a convicted murderer named Girly Crum (whose full name is Girly Logsdon Crum, Jr.) When it comes to naming people, real life is always one step ahead of the fiction writer.

Epilogues typically tie together a novel’s loose ends but in Happy Talk, the multiple epilogues open more new, unresolving storylines rather than wrap up old ones. I went by instinct when coming up the splintered endings, and I’ve never been sure it works all the way, but I would always rather go by instinct than the creaky voice of a college writing teacher telling me what I am not supposed to do. I always think it’s better to follow your instincts and find a way to make it work.

What is your relationship to the TV show Portlandia?

We live in Portland and have a kid named Grover, and Portlandia based an episode around a kid named Grover. As near as I can tell, our Grover is the only Grover in Portland, so I figure somehow the show’s writers caught wind that Grover is a Portland-friendly name from our kid. It’s a very loose connection, but Portland is still a small enough place that everything connects.

Can you tell us about how Red Lemonade works?

It’s basically a site where writers can post short or long narrative pieces and make comments on other writer’s works. When the site started, I was deeply impressed at the caliber of writers using the site, and equally impressed that people would read deep into books on a computer screen. (I guess if you’re used to writing on a computer, it’s not a stretch to read on a computer). The publisher, Richard Nash, then selects books off the site for publication based largely off the community’s feedback.

Who are writers that inspire you?

At the risk of name dropping, I leaned heavily on Maya Deren, William Gaddis, Virginia Woolf, Ishmael Reed, Marguerite Young, Robert Altman, Leon Forrest, and Cole Porter in Happy Talk. I didn’t just lean. The book is a tribute to how much I enjoyed their works.

Are there any writers you want to give a shout-out to?

Jonathan Evison. He’s not only an ace storyteller who’s cranking out books that I am always excited to recommend to other readers, he’s also been a great help to me in getting the word out about Happy Talk. He’s helped many writers, and soon, there will be a whole generation of writers whose careers were given a boost by Jonathan.

What does the publishing industry need more of? And less of?

Publishing needs less of the insistence that books are ‘product.’ As readers know, a book is an experience. It’s the experience that readers remember and makes them love books.

Any last words for aspiring writers?

Instinct might be the writer’s most crucial asset. Write what your instinct tells you to write in the style you want to write, and find ways to make it work.

3 thoughts on “The Richard Melo Interview”