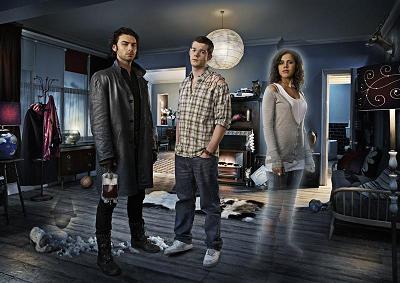 First off, there’s the premise. A vampire and a werewolf share a flat together with the ghost of a dead woman. I admit to being skeptical when I heard about Being Human. While it sounds like a paranormal romance version of MTV’s The Real World, the BBC series Being Human presents a compelling drama about the desire to “be human.”

Being Human is the brainchild of Toby Whithouse, a writer from the recently rebooted Doctor Who franchise. With this creative firepower, Being Human creates a show that possesses fantasy elements and a superior drama with complex characters and intricate storylines. The show began airing on BBC Three in 2009 and is currently in its fourth series (a term synonymous with the American TV “season”). Since Being Human is a post-Watershed show, there are copious amounts of f-bombs and boobs. (This essay will primarily focus on storylines in Series 1-3. I have not yet seen any episodes of Series 4, but this shouldn’t overshadow the major themes faced by the main characters and their accidental inhumanity.)

Being Human follows the trials and tribulations of a werewolf named George Sands (Russell Tovey), a vampire named John Mitchell (Aidan Turner), and a ghost named Annie Sawyer (Lenora Crichlow). George and Mitchell work as hospital orderlies, cleaning up the messy bodily fluids associated with the medical field. As such, they work hard to “pass” as humans. It is tougher for Annie who is incorporeal and mostly confined to the flat they rent in Totterdown, Bristol. (In Series 3, the setting is moved to Barry, Wales.) While she lacks a physical body, she can brew a mean cup of tea, much to the delight and admiration of George and Mitchell.

Mitchell contends with a version of vampire politics much different from that encountered in a show like True Blood. The vampires of Being Human remain “in the casket” so to speak, but a vampire named Herrick, who sired Mitchell, has other plans. Herrick doesn’t desire to hide from humanity, but speaks of a revolution in the works, seeing humanity as a food source, equating them to cattle. Herrick characterizes Mitchell’s desire for assimilation as ludicrous, since thinking of humans and vampires as equals is akin to advocating that cows have the right to vote. Unlike most other vampire projects, the vampires of Being Human can walk in the daylight, but thankfully do not sparkle or pine after Mormons.

George faces his own challenges when he meets a father-and-son pair of werewolves. Both seek to avenge the death of loved ones and to get back at Herrick’s minions who used them for dog-fighting. He also faces more mundane challenges, like finding a place that’s safe for him to change. He has a conversation with a cage supplier for bondage aficionados. Unfortunately, George is a bit nebbish and has trouble verbalizing that he needs something, well, stronger.

Annie’s struggle to figure out her place in the universe involves a lot of soul-searching. The thrust of her situation changes drastically when she discovers she had been murdered by her fiance. But it still leaves her with the issue of why she’s still in this apartment as a ghost and not in Heaven or some sort of afterworld? Being Human does have a unique vision of the afterworld, staging it as a series of corridors, simultaneously nostalgic (murder victims can stay in recreations of their childhood bedrooms) and nightmarish (train sounds and screams with intimations of being dragged off to something unspeakably bad).

The production values also reinforce the need of the characters to act human. Mitchell’s vampirism is akin to an addiction and he’s always in danger of falling off the wagon. In Series 3, he falls off bad and over twenty people get slaughtered in a subway car as a result. Unlike Bill Compton from True Blood and Angel from Buffy the Vampire Slayer, Being Human has created “a vampire with a soul” that doesn’t come across as boring and maudlin. George’s problems are of a different sort. Every full moon, he becomes a werewolf. The show has chosen to make his transformations in a graphic and horrifying way. While CGI graphics would offer an easy out, Being Human relies on practical effects and deft sound editing. During his transformation, George’s bones are broken and skin is stretched until he ends up a larger stronger werewolf. (George is kind of lanky and nebbishy.) The melding of biohorror and domestic drama make for compelling stories. Annie’s issues are more psychological, trapped in a flat and unable to do things her flatmates do, making her afterlife one of angst and resentment. Once she does start up a personal relationship with another (corporeal) person, she realizes she can’t consummate the relationship.

Being Human offers a rare glimpse at a positive portrayal of a “passing” narrative. Stories of passing are usually fraught with heavy social commentary and condemn the status quo. One need only look at African-American novels and the trope of the light-skinned black person surviving under society’s misperception that they are white. And the resulting drama from avoiding being discovered. Being Human goes the opposite way: it relates how the three main characters desire to be thought of as human. The dominant status quo is desirable. While some storylines have been occasions for social commentary (the vampires using werewolves for dog-fighting competitions is an obvious example), social commentary is done with a scalpel, not with a mallet. Being Human avoids the heavy-handedness of True Blood.

What does it mean to be human? BBC’s Being Human relates how one strives to not act monstrous, even if it is one’s very nature. It also reinforces how precious one’s humanity is especially after it is lost. One can reclaim one’s humanity, but at a cost.