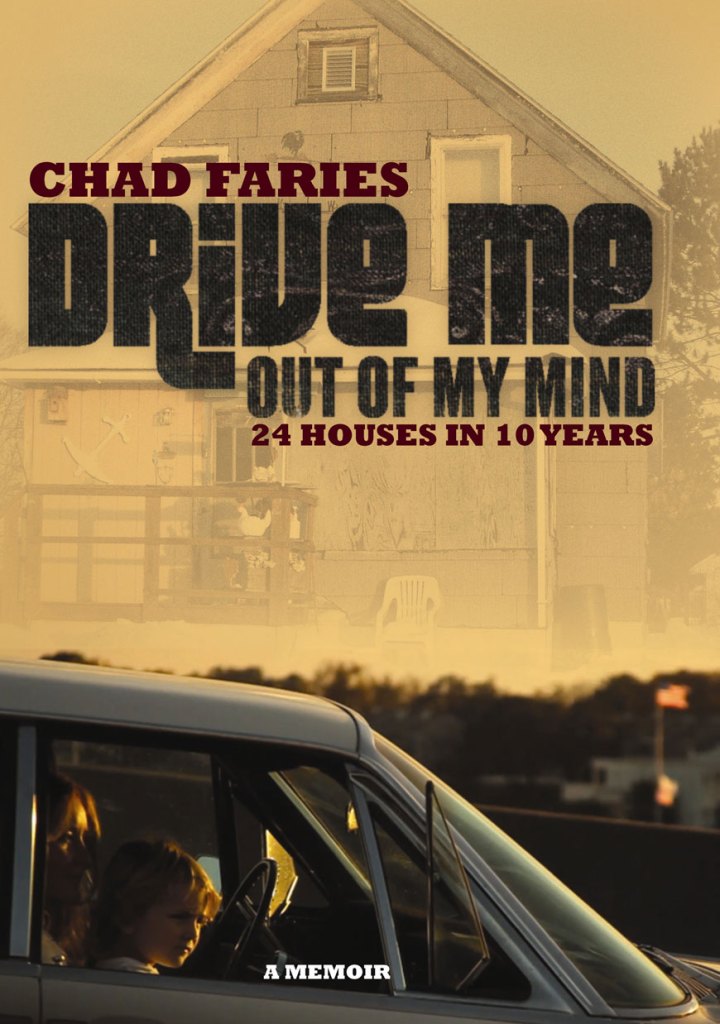 These days memoirs are a dime a dozen, glutting the market with tales of the self-absorbed.  Fortunately, Chad Faries stands out in this crowded field with his unique tale of childhood in Michigan’s Upper Peninsula.  Drive Me Out of My Mind: 24 Houses in 10 Years, a Memoir, follows Chad’s childhood from roughly 1971 to 1980.  Chad’s singularly strange upbringing and poetic sensibility create a memoir unlike any other.  Most memoirs focus on bourgeois nuclear families and the travails of growing up middle-class in the suburbs.  In childhood, Chad discerned the differences of his family and “families on TV.”

Chad’s non-traditional family includes his mother, his aunts, and his grandmother.  On occasions, he encounters the Man-Worth-Mentioning, a father figure who isn’t a danger to him or his mother.

In abandoned mining towns in the UP, Texas trailer parks, and a central Wisconsin university town, Chad witnesses a cavalcade of father figures.  Throughout his memoir, we see his relationship with his mother grow stronger and stronger, despite her many failings and weaknesses.  Throughout the tale, the mood is both childishly naïve and culturally postapocalyptic.  His transformation from child of the post-Sixties lumpenproletariat to university professor makes him, in the words of the late Hunter S. Thompson, like “a monster reincarnation of Horatio Alger.”

Because Chad is a poet, he creates a memoir that is both feral and visionary.  Other critics have compared him to David Sedaris (and like Sedaris, Chad is indeed funny), but his kaleidoscopic vision comes closer to that of reclusive visionary artist Henry Darger and the early years of Iggy Pop.  Scenes of graphic violence combine with passages of strong maternal love and a boy trying to find his place in the world.  In order to make sense of the chaos, the drugs, and the poverty, he seeks comfort in a Barbie doll and his homemade Green Lantern ring.

The Green Lantern ring becomes a talisman.  During the tough times, Chad, like his hero, uses his ring and his imagination to make things materialize to solve whatever problem faces him and the ones he loves.  Each chapter ends with the words, “And then we moved.”  In a life of wild events and constant movement, it provides a kind of refrain, contextualizing the events.

The memoir ends with a transcribed interview between Chad and his relatives in 1981 – 1982.  In the chapter, he is getting a tattoo from his aunt while he talks with his mother about her life experiences.  The chapter comments upon everything that came before as it calls into question what was true and what was misremembered.  Like tattooing, the memoir is a process, with words and memories creating a compelling narrative whereas a tattoo artist creates art from ink on skin.  Drive Me Out of My Mind is a visionary memoir of love and art and passion and scars, an indelible life where the raw materials of abandoned mines, a Marvel superhero, and controlled substances create a visionary artwork.