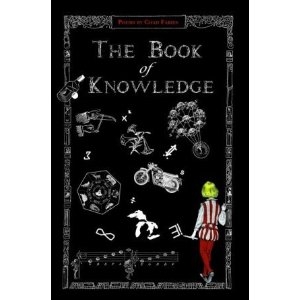 With inspiration taken from Arthur Mee’s turn of the century work called The Children’s Encyclopedia, “that cared nothing about alphabetization,” Chad Faries wrote The Book of Knowledge.  Like The Children’s Encyclopedia, this little volume of poetry represents “a tapestry of complete knowledge,” embracing everything from cartography to sexuality to regional history (in this case, Iron County, Michigan) to animals and the avant-garde.  Published by the puckish literary upstart calling itself The Vulgar Marsala Press, the Book of Knowledge has four sections with abundant illustrations peppered throughout.

Faries possesses a poetic voice intellectual, eccentric, and playful.  Despite his PhD in Creative Writing from the University of Wisconsin-Milwaukee, its nice to see him not take himself too seriously.  In answer to the poem entitled “Why is it bad to sleep with flowers in your room?” Faries writes:

The reason is a very good one.  They may
no longer be beautiful as they once
were, and they are constantly exposing
their beautiful genitals which makes the world
envy and creates war and destruction,
makes magazines like Barely Legal
and Young Dumb and Full of Come.

Faries remains sympathetic to the natural world.  In the titular poem to the section called “Horse Latitudes” (theme: cartography), he writes from the perspective of the horse.  Each poem in the section contains an excerpt from Bite Size Geography: 150 Facts You Won’t Believe.  The aforementioned horse latitudes got their name from unusually calm parts of the sea.  The sailors ended up jettisoning their horses from the cargo since the horses would consume part of the precious water supply.

Today is the calm I fear
I have drunk my last water.
The sea boys are shrugging
their shoulders and dragging their feet
along the saltwater deck.  Their eyes
are shifty and perverse

and they evaluate.  Reckless
equations of weight and mass
ache in their heads.

In terse language, slightly off-kilter and loaded with dread, Faries unwinds the tale of this doomed horse.  The same “shifty and perverse” boys can be seen whenever the UN or IMF holds a summit or conference to discuss energy or food policy.  The First World makes some “reckless equations of weight and mass” and decides which Third World nation to throw off the deck to preserve what resources we haven’t polluted, made radioactive, or consumed.

The Book of Knowledge is Faries’s sophomore collection, although he has had poetry published in numerous venues.  It’s a book that is playful and profound.  This reviewer looks forward to seeing more from Chad Faries.  For those gun-shy regarding small presses and what they offer, this book is a great entrée to The Vulgar Marsala Press.

One thought on “The Book of Knowledge by Chad Faries”