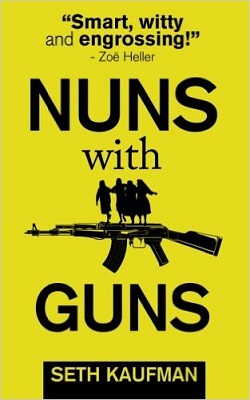 The foul-mouthed reality show producer Rick “The Prick” Salter returns in Seth Kaufman’s Nuns with Guns. In the novel, Rick has been exiled from television while he deals with a lawsuit from his previous program, The King of Pain. During that time, he counsels his fellow staff members on other TV shows they want to greenlight. Rick also works hard to give his live-in maid/fiancee Marta a wedding she deserves. But first he needs to get immigration off her back and deal with the thugs harassing her sons Los Angeles taco restaurant. Then a random shooting claims the life of a young bus boy. The gun fatality kicks Rick into high gear. In his anger and frustration about America’s comically inept gun control laws, he decides to produce another reality show. He calls it Nuns with Guns.

Kaufman draws us into the heady atmosphere of producing a reality show broadcast on network TV. Rick insists it be on network TV, since that guarantees the most eyeballs. The premise of the show has four nuns competing to bring in the most guns. They do so in various big city gun exchanges. Turn in a gun, you get swag, your picture with a nun, and 15 seconds of fame. But the euphoria and optimism begin to slide as protests and death threats mount. The gun lobby (correction: the gun manufacturers lobby) may have the money, the gutless politicians in their back pocket like so many nickels and dimes, and mastered the art of disingenuous rhetoric, but Rick Salter found a way to counteract that. Americans love TV, spectacle, and a cause to rally around.

I’m giving this the highest score because Nuns with Guns possesses crackerjack writing, social relevance, crossover appeal, and it’s really damn funny. There’s plenty of emotional sentiment, but it doesn’t collapse into maudlin sentimentality. Nuns with Guns is also a fantastic title. Kaufman has done the impossible: he’s turned a foul-mouthed, PR-savvy, manipulative, selfish, and occasionally self-righteous reality show producer into a heroic figure. Highly, highly recommended. Even if you’re a member of the NRA and love those guns, you would also find this an enjoyable novel.