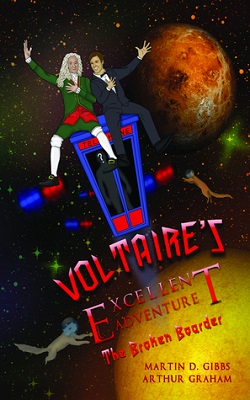 What the hell did I just read? And I mean that in the best possible way. Voltaire’s Excellent Adventure: The Broken Boarder: Gatsby, Booze, and Hot Philosopher Action!, by Martin D. Gibbs and Arthur Graham is certainly unique and downright bizarre. The plot involves the French philosopher Voltaire as a time-traveling adventurer and his quest to save a couple minor characters from F. Scott Fitzgerald’s The Great Gatsby. The novel begins with “An Apology and an Explanation,” announcing the saga will be “as logical as a plate of spaghetti written by a Microsoft programmer.” What follows is a twisted take on literary postmodernism. One part Mulligan Stew, one part Monty Python, and one part The Norton Anthology of World Literature … and squirrels … and wombats … and lots of drinking, vulgarity, and lunacy.

The main thrust of the plot has Voltaire careening around Jay Gatsby’s estate, attempting to save Owl-Eyes from the evil machinations of Klipspringer. Nick Carraway’s literary identity is given another, shall we say unorthodox, explanation. And Voltaire makes a detour to another planet to fight a Cthulhu-esque caricature. While the plot moves things forward (or is it backward?), it’s not what I found either important or compelling about this strange novel. Only mid-way through reading Voltaire’s Excellent Adventure, did I discover it was actually a sequel.

What was wonderful about the novel was how reckless and unhinged it was. It reminded me less of other bizarro literature than the ‘pataphysical absurdities of Alfred Jarry. In Ubu Roi, Jarry has The Entire Polish Army as played by a single character. The play, written in 1896, anticipated both surrealism and absurdism. It also mocks the pieties and pomposities of religion, nationalism, and masculinity. Voltaire’s Excellent Adventure comes close to that kind of anarchic spirit. Voltaire travels through time, hobnobs with fictional characters, and gets violent with a cleaver.

That said, Voltaire’s Excellent Adventure isn’t for everyone. Even for those who enjoy a bit of bizarro lit with their morning coffee may find the novel either off-putting or too loosely written. Granted, this self-published work lacked a certain discipline found in other mainstream works. But for a self-published work, the production was first-rate. I also loved the cover image and its parody of Bill and Ted’s Excellent Adventure. I found its gleeful disregard for narrative conventions to be charming. The constant references to squirrels and wombats came across as juvenile and silly. I kept waiting for the story to totally fall apart, but it never happened. It was too weird to put down and too joyously sideways not to react positively.