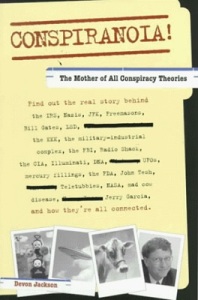 Conspiranoia!: The Mother of All Conspiracy Theories
By Devon Jackson
Plume (2000)
Review by Karl Wolff

“The earth is hollow. There’s a vast subterranean network of alien government bases underneath the very ground we all work on. The smallpox and polio vaccines are part of a federal plot to catalog people for future mind-control experiments.” Devon Jackson’s classic reference Conspiranoia!: The Mother of All Conspiracy Theories throws down the gauntlet early on. Written in 2000, he arranges the book into several sections, each presenting a different conspiracy. Predictably, many are based on anti-Semitic ideas, others focus on mind-control, and one is devoted to President George H.W. Bush.

In the spirit of this essay series devoted to peculiar institutions, oddball literary experiments, and reckless rugged individualists, I’m going to zag where others would zig. Meaning, I’m not going to go through the all-too-common rigmarole of dismissing conspiracy theories and those who believe them. Not exactly. Why are we, the American people, so enamored by conspiracy theories? From the assassination of President John F. Kennedy to the Watergate break-in, American culture became seeped in conspiranoia. Both Philip K. Dick and Thomas Pynchon wrote conspiranoic literature. It would make sense, since FBI agents broke into PKD’s house and searched through his files. Just because you’re not paranoid doesn’t mean they aren’t after you.

The word conspiranoia is a neologism bringing together conspiracy and paranoia. In 2000, when Jackson wrote his book, the United States still remained conspiranoic. The X-Files and Alias were the top TV shows. We worried about black helicopters, militia groups, and the Monica Lewinsky scandal. Government overreach and FBI strong-arm tactics remained fresh in our memories due to things like the Randy Weaver debacle, the Branch Davidian crackdown in Waco, Texas, and the bombing of the Murrah Federal Building in Oklahoma City. The World Trade Center had been bombed in 1994 and the Heaven’s Gate cult reminded everyone what happened to Jim Jones’s People’s Temple in South America.

Conspiracies help us make sense of the world, regardless of their validity or plausibility. Today the September 11th terrorist attacks recall not so much the Pearl Harbor attack but the JFK assassination. 9/11 Truthers believe they know the answers or else demand those in power tell the truth. The same goes for anti-vaxxers, anti-GMO activists, and anti-Obamacare protesters. Since Obamacare isn’t about making healthcare affordable, it’s a socialist nazi communist plot to kill grandma. Because that makes total sense.

To make sense of the world around us, we use conspiracies to create patterns. Humans are pattern-making creatures. Not every pattern we create makes sense, but it gives us comfort. It makes us feel less afraid, like we know who is really pulling the strings.

Jackson does something different with Conspiranoia! He lays out each conspiracy theory and enumerates the key personalities, organizations, ideologies, and so forth. Since many of them appear in numerous conspiracies – case in point, Henry Kissinger – he will simply list them the other times they appear. He doesn’t cite references or provide a bibliography. At the beginning of the book, he says included everything relating to the specific conspiracy. There are stone cold facts mixed in with conjecture, speculation, and utter bullshit. This is not a text to read passively or individually. Meaning, if it doesn’t smell right, the only way you can verify it is by finding corroborating sources. Operation Paperclip has become part of the official history of the Central Intelligence Agency. The CIA as part of some over-arching Nazi-run New World Order is probably not accurate. With the rise of the Internet, things get more complicated. The Internet has lots of information, but a user has to be active, skeptical, and tenacious. “I saw it online. This guy who has a blog said so.” Saying that has become a punchline in terms of information gathering.

The book is peppered with quotes. Roger Ailes, the head of FOX News once said, “People don’t want to be informed; they want the illusion of being informed.” Richard Hofstader, in his 1967 classic, The Paranoid Style in American Politics and Other Essays, said that, “The distinguishing thing about the paranoid style is not that its exponents see conspiracies or plots here and there in history, but they regard a “vast” or “gigantic” conspiracy as the motive force in historical events. History is a conspiracy.” He just summed up the Big Reveal in Captain America: Winter Soldier.

(In an earlier essay on Mike Mignola’s Hellboy, I enjoyed how Mignola tied together the alleged connection between Nazis and the occult. Mignola also threw some Lovecraftian elements into the pot to make things more interesting. Again, one to be discerning enough to differentiate between Mignola’s pulp masterpiece and whatever fascinating the Nazis had for the occult. There’s a lot of trash written about the Nazi occult connection, but very little I would consider diligently researched.)

Part of assessing conspiracy theories involves weighing the evidence. It goes back to History 101. Yes, you can make that assertion, now show me the evidence. Cite your sources! Does absence of evidence mean evidence of absence? Perhaps, especially if you’re dealing with an intelligence agency or a confidential corporate memorandum. Is correlation the same as connection? Jackson explains in the introduction how conspiracy theories thrive on guilt by association. Hence the plethora of anti-Semitic conspiracy theories. Because George W. Bush and Al Gore were both in Skull and Bones, the Yale secret club must be evil. Just look at all those rich Ivy Leaguers who are in it!

The conspiranoic mind-set is akin to a fundamentalist mind-set. The world is a violent, chaotic, and depressing place. Ergo, someone or some evil organization must be running things, profiting on the chaos and suffering. People profiting becomes the motive, unless it is power, unless it is dynastic succession. “The Bilderbergers want to create chaos so people will give up their rights,” sounds about as credulous as “God works in mysterious ways.” It is a response built around asserting everything yet saying nothing. The Elite control the nation. Fine, who are The Elite? Give me their names and evidence of their wrongdoings. Evidence, not hearsay, not conjecture, not innuendo.

This isn’t to say every conspiracy theory is without merit and those who believe them are cranks. The challenge in addressing this becomes more difficult since each side enjoys labeling the other. One is either a Conspiracy Theorist (aka “a loonie”) or they believe a Lone Nut did the assassination (aka “an Establishment stooge”). Being a skeptic can be hard work. The more one delves into the biography of Lee Harvey Oswald, the more opaque and strange things become. The trip to Russia and the hassle-free return? What was he doing in New Orleans? In Mexico City? The recently released book, The Devil’s Chessboard by David Talbot, explores the bizarre life of Lee Harvey Oswald and his connection to former CIA director Alan Dulles. As a historian, the official story of the Lone Nut never added up. Talbot claims the Warren Report was a whitewash and the JFK assassination had more in common with the assassination attempt on Charles De Gaulle by traitorous elements in the French intelligence and military establishment. It’s not like a conspiracy to assassinate a president is unprecedented. John Wilkes Booth was part of a larger conspiracy. A crime is still a crime. But on a more practical level, conspiracies remain hard to prosecute. RICO is tougher to prosecute than tax evasion.

Conspiranoia! is a classic, a product of its time. Some would say of a more innocent time, but American was never that innocent. It would be naive to say there aren’t wealthy and powerful coalitions formed from groups and individuals who find their agenda momentarily aligned. But when exploring conspiracy theories and the darker secrets of the deep state, never forget the Peter Principle. If we are living in The New World Order and Obama is the nazi socialist anti-Christ, he’s doing a terrible job. Like Margaret Cho once said, “You know, George Bush is not Hitler. He would be if he applied himself, but he’s just lazy!” Unless you believe Hitler is living in the hollow earth, if only the Iron Sky sequel would come out sooner.