An occasional series that is a continuation of my essay anthology, On Being Human: critical looks at books and movies that examine the question of humanity. (Buy the limited edition hardcover, Kindle version, or download it for free at the Chicago Center for Literature and Photography) 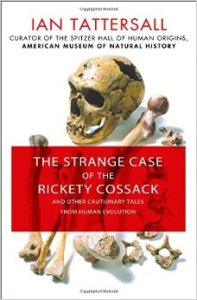 Author’s Note: On Being Human Redux, like the book On Being Human, primarily focuses on works of fiction. I am choosing to include this book on the intellectual history of paleoanthropology because it also seeks answers to the question, “What does it mean to be human?”

Prior to the publication of Charles Darwin’s On the Origin of Species, a Neanderthal skeleton was discovered in Germany’s Neander Valley. Dubbed The Rickety Cossack because of his massive bulk, craggy brow, and bowlegged stance, it reigned as the valid scientific explanation. The Strange Case of the Rickety Cossack: and other cautionary tales from human evolution, by Ian Tattersall explores the challenging subject of the intellectual history of paleoanthropology. Tattersall, the Curator Emeritus in the Division of Anthropology of the American Museum of Natural History, investigates the personalities, theories, and discoveries involved in the field. (Rickety Cossack exists as a complementary text to Tattersall’s earlier book, Masters of the Planet. Masters of the Planet followed various members of ancient hominids, whereas Rickety Cossack follows ideas and theories. Reading both will offer the lay reader a broad perspective on the field of paleoanthropology and our place in it.)

Despite acknowledging the validity of Darwin’s theory of evolution, the discipline of paleoanthropology exists as an outlier. Only very recently have we begun to perceive our biological story in the same spirit as different families of organisms. This is why Tattersall opens the book with an autobiographical sketch of his time in Madagascar in the Seventies attempting to do fieldwork on lemurs. Political upheaval in Madagascar prevented Tattersall from completing his fieldwork, but his use of lemurs as an example is illuminating.

Separated over fifty million years ago and isolated on the large island of Madagascar off the coast of Africa, lemurs flourished. They occupied numerous environmental niches and evolved into a variety of forms. Despite being in a single family, the primates occupy numerous branches. These include the small two-ounce mouse lemur, the aye-aye, and the recently extinct species the size of a gorilla. 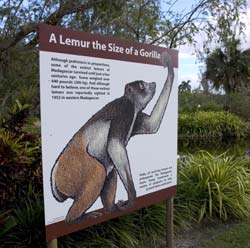 As opposed to a tree with many branches, the story of human evolution reads like a storybook fable. The dominant theme is that our ancestors, over millions of years, developed from primitivism to sophistication in a linear fashion. It makes sense only if you look at the evidence in a specific way. This dominant narrative also gives humanity (Homo sapiens) the veneer of specialness. Tattersall argues for the negative, saying this narrative, while comforting, was flawed and then reinforced by the behavior of the paleoanthropology community at large.

What does it mean to be human? In the field of paleoanthropology, the question offers a wild array of challenges, prejudices, and institutional pushback. In order to understand this dilemma, it is necessary to flip the question upside down. What does it mean to not be human? Scientific understanding comes from a disparate combination of theory, evidence, and interpretation. But it is a tricky interplay between these three aspects. Tattersall’s book shows how theory dominated the interpretation of evidence.

The Rickety Cossack pulls off an amazing feat. It creates a narrative where we read about the rise of a dominant theory and how it changes the way fossil evidence is perceived. Then he shows how new theories, new technologies, and new disciplines engage with the dominant theory. As more and more fossils were discovered and inventoried in museums, paleoanthropologists worked diligently to secure bragging rights.

In the early days of paleoanthropology, Darwinism eventually became the dominant theoretical paradigm. As theorists debated Darwin, Huxley, and Russell in academe, bones were dug up. Paleoanthropologists made authoritative statements and created a plethora of a Linnaean names for their finds. There was a mass of evidence, but no organizing principle. It was all very Victorian.

But is the story of human evolution progressive and linear? Because the notion of human specialness made sense, so did this interpretation of the evidence. Human specialness comes in handy in fields as diverse as religion, politics, and the arts. This also has to be justified with evidence. During the nineteenth century, evidence was accumulated with bones. As with the practice of history, evidence is useless without an interpretative framework. The dominant interpretation involved Darwin’s “survival of the fittest” and species occupying environment niches due to adaptation.

Paleoanthropology received a rude wake up call in the person of Ernst Mayr, an ornithologist who crafted a new interpretative framework. Tattersall recounts how Mayr’s New Evolutionary Synthesis rocked the relatively hermetic world of paleonthropology in the 1950s.

Mayr didn’t bother to mince words. In no uncertain terms, he informed the assembled multitudes that the picture of complexity in human evolution implied by all those hominid species and genera was just plain wrong. To begin with, the declared, both the theoretical and morphological yardsticks by which the anatomists had differentiated them were entirely inappropriate.

Tattersall goes on to say,

Put together, Mayr said, these various practical and theoretical considerations that everyone of the human fossils known should be placed within a single polytypic lineage. And not only was there a mere three species recognizable within that lineage, but every one of those species belonged to a single genus: Homo. As Mayr saw it, Homo transvaalensis (the austalopiths) had given rise to H. erectus (including Pithecanthropus, Sinanthropus, and so forth), which in turn evolved into H. sapiens (including the Neanderthals). And that was it.

Mayr’s critique, while well-founded, had the result of throwing the baby out with the bath water. Too much diversity was met with too little diversity. Mayr also rejected the emergent discipline of genetics, arguing against the gene as the basic operational unit within evolutionary development. Mayr sought a smooth and progressive view of evolutionary development. But genetics throws that theory into stark relief. As Tattersall explained in Masters of the Planet, genes simply don’t work that way. “Missing links” don’t exist because they haven’t been found yet, but because genetic development isn’t about smooth transitions one would see in gradually changing morphology.

Genetics brings up the important issue of form. It is a truism that evolution occurs through an organism changing. Mayr takes a view that smacks of hindsight. Of course humanity has evolved from these primitive species, look at the evidence. Cue the oft-cited and oft-parodied chart of human development from ape to man. This wrongheaded view presupposes H. sapiens evolved from a single evolutionary branch. (Remember “human specialness.”) If it were any other species – mollusks, fruit flies, or lemurs – this reasoning would ring false.

On a related note: Does H. sapiens place on a multi-branched evolutionary take away “human specialness”? One of Tattersall’s more persuasive assertions is that H. sapiens became the dominant species of its family (Homo) and the planet through the “symbolic leap.” Through this leap, our species has done amazing and awful things. The challenge is showing how the symbolic leap occurred with concrete evidence. It happened so long ago that it becomes nigh impossible to validate in terms of pointing to bones. Yet it happened far back enough that common anthropological markers (group behavior, artistic expression, language) don’t work.

While the academic community fought turf battles among rival interpretations, new technologies made possible new ways to interpret the recent discoveries. Carbon dating is the most common known technique for finding a bone’s age, but Tattersall goes into detail about other dating techniques. In addition to technological advance, other researchers explore related disciplines like taxonomy, cladistics, and environmental issues. The challenge becomes winnowing the torrent of variables.

While Tattersall’s career flourished, his work coincided with popular academic Stephen Jay Gould. Gould revolutionized evolutionary theory with his theory of punctuated equilibrium. Simply put, is evolution about stasis or disruption? After an extinction event, species rush to fill in the empty evolutionary niches. Gould theorizes that this fill-in occurs at great speed. (At least quick in relation to the glacial pace of species change over time.) A mutation in the genes disrupts the usual flow of things, but if this mutation proves conducive to filling in the environmental niche, then, after generations, it stops becoming a mutation and instead is simply another attribute of the species.

Scientific investigation involves judgment calls. When a cache of bones is discovered, a scientist has to decide what taxonomic box to put the bones. Is it a pre-existing species? Is it a new species? Is it a species between two other species? Where does one species start and another end?

So where does H. sapiens reside on the evolutionary tree? Tattersall offers an illuminating answer with two evolutionary trees placed side by side. The first is from 1993 and shows the accepted theory of mankind’s linear, progressive evolution from primitive to sophisticated. The second tree is from 2012. Not only are there more species, but longevity of species is included. The tree has more branches, but it lacks the solidity and uniformity of the first. There are outliers and times when multiple Homo species co-existed. Until very recently, H. sapiens coexisted with Neanderthals, H. erectus, and H. florensiensis. It is notable that H. erectus flourished from approximate 1.5 Mya (million years ago) to 500,000 years ago. The chart shatters any illusion about the specialness and progressive development of H. sapiens. But one shouldn’t have knee-jerk reactions to such revelations. We became the dominant species from our symbolic reasoning. The second chart merely shows our species as part of a larger biological family. It is a paleoanthropological version of the Copernican chart of the cosmos. The paradigm is new and our alleged superiority is diminished, radically revising the dominant evolutionary narrative. It is a revisionist history that requires telling and Tattersall does a magnificent job.