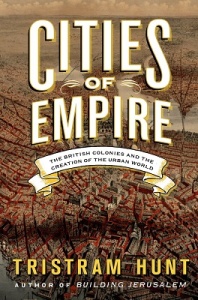 Cities of Empire: The British colonies and the creation of the urban world
By Tristram Hunt
Metropolitan Books/Henry Holt and Company
Reviewed by Karl Wolff

Ask anyone and they will probably have an opinion on imperialism. Look at social media and people will call the United States an empire. When asked to define what an empire is will usually garner obfuscation and self-righteous outrage. After all, what did the Roman Empire ever give us? When it comes to the British Empire reactions arrive in two flavors, “its Whiggish focus on the heroic age of Victorian achievement” (a la Niall Ferguson) and the left reducing it “to slavery, starvation and extermination; loot, land and labour.” Tristram Hunt, the Labour PM for Stoke-on-Trent, seeks to investigate British imperialism beyond the moral dichotomy of good-versus-evil. He does in Cities of Empire: The British colonies and the creation of the urban world.

Hunt begins his narrative in Boston and relates how the history of the city up to the Revolutionary War. Right up to the 1770s, Boston remained pro-British and Protestant in attitude and demographics. It is hard to imagine given Boston’s own self-mythologizing. The book continues with lengthy profiles of nine more “cities of empire”: Bridgetown, Dublin, Cape Town, Calcutta, Hong Kong, Bombay, Melbourne, New Delhi, and finally Liverpool. The cities Hunt selected provide an idiosyncratic interpretation of what imperialism is. Boston and Bridgetown in the Barbados represent two focal points of Triangular Trade. Cape Town is seen as nothing more than a rest stop on the way to India, at least until gold and diamonds are found. Dublin and Melbourne appear as outliers, but Hunt weaves together how instrumental both were to the British Empire. Dublin is a strange case for two reasons. The first is that Ireland had been a British Empire (and English crown) since the sixteenth century. Dublin is also the closest in proximity to London, creating an environment where England’s geographic backdoor is treated like a foreign colony. Melbourne represents the farthest geographical reach of the British Empire. Hunt paints a picture of a sparse, harsh environment that is sparsely populated but rich in material wealth. The narrative reaches a geographic and economic end in Hong Kong, a banking capital emblematic of free market capitalism. Hunt finishes the book by looking at Liverpool, a city enduring the ups and downs of the British Empire. When the British Empire finally collapsed in the years following the Second World War, Liverpool’s prosperity collapsed along with it.

This above is only a thumbnail sketch of Hunt’s book. A challenge he addresses early on is his focus on only ten cities and the question, “Why those ten cities?” In conducting an experiment, a scientist has to make judgment calls about what variables to include and exclude. Too many variables and the experiment becomes unwieldy and unfeasible. The same goes for the practice of history. A historian has to put limits on such things like scope. Cities of Empire only covers ten cities, but it is almost 400 pages long. Why Hong Kong and not Shanghai? Why Dublin and not Cairo? To encompass a single volume Hunt has struck a balance between depth and breadth. Too broad and the book would have felt superficial. Too deep and the broader scope of global imperialism would have been lost. Hunt also has his pet interests that lead into his interpretation of what imperialism is.

So what is imperialism? How do the phenomena of colonialism, imperialism, and capitalism differ? Throughout the book, the British play the Great Game of imperialism with France, Belgium, Holland, and Germany. Imperialism is about force and appearance. Force boils down to military and political dominance of the indigenous population. But not every case involved the Union Jack and guns a-blazin’. The British and Dutch excelled at softening up the ground with economic imperialism. Britain created joint stock companies that set up shop on foreign soil. While they brought in wealth to the Mother Country, it had the tendency to look unseemly. The transition from colony to empire occurred through the transition from “counting house to Government House.” An empire had to look the part. Hunt’s fascination with architecture shines through when he profiled the architects and landmarks that constituted the British Empire. The challenge came in what those landmarks should look like. India saw a push and pull between the creation of imperialist buildings that reflected Indian history and culture. Other imperialist buildings in India look like they were air-lifted from downtown London. Washington, D.C. reflects the might and moral leadership of the United States with impressive monuments and the soaring dome of the U.S. Capitol. It also looks like the architects had a thing for re-creating Roman architecture with a crass gigantism. Depends on who you talk to and your own personal opinion.

On top of the architectural debates, the British Empire created a hierarchical system focused on race. After the secession of the Thirteen Colonies and the end of the First British Empire, a Second British Empire began to slowly build up. Canada, Ireland, and Australia became known as the White Dominions. Not a metaphor. The situation became more top-town and oppressive in places like China, India, and South Africa. South Africa became further complicated by the struggle between British and Dutch colonists. Its geographic location saw it become a hub of a multiracial population, including those from India used as cheap labor. While Hunt seeks to go beyond the good and evil of imperialism, he pulls no punches when bad things are done in the name of the British Empire. Yet as India sought to throw off the yoke of imperial oppression and racist policies, it could not completely eradicate the British influence. Today India has a parliamentary democracy and a damn fine cricket team. At the same time curry could be considered Britain’s national dish.

In the end imperialism is neither all-good nor all-bad. But imperialism has a legacy and how do we interpret that legacy? Imperialism also isn’t a one-way street. The British Empire left its stamp on the planet, but the areas it administered also influenced Britain. History is a fine balancing act between reporting what happened in an objective and disinterested manner. It is also utilizing personal experience, accumulated knowledge and evidence, and one’s moral convictions to arrive at a judgment. The legacy of imperialism shouldn’t have the nasty bits papered over nor should it become a narrow-gauge tirade that overshadows the good things resulting from the experience. Hunt ably balances between the two poles, pulling no punches, but also avoiding the tendency to see things in a simplistic black-and-white mindset. After all, what did the Roman Empire ever give us?