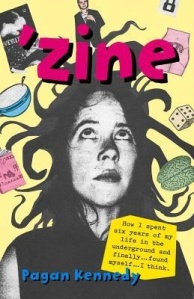 ‘Zine: How I Spent Six Years of My Life in the Underground and Finally … Found Myself … I Think
By Pagan Kennedy
Santa Fe Writer’s Project
Reviewed by Karl Wolff

From 1988 to 1993 Pamela “Pagan” Kennedy wrote an autobiographical ‘zine called “Pagan’s Head.” During the ‘zine heyday of the early Nineties, a book called Pagan’s Head was published by St. Martin’s Griffin in 1995. Like The Big Lebowski and Blade Runner, it’s initial run ended in a flop. But luckily The Santa Fe Writer’s Project (SFWP) has decided to re-issue the book. Not only that, SFWP has launched The Pagan Kennedy Project, with the goal of re-issuing all her books.

Kennedy was part of a hipster group located in Allston, Massachusetts. The other hipsters also put out their own ‘zines. Now you’re asking yourself two questions: What’s a hipster? and What’s a ‘zine? For ‘zines, the best place to start would be Joshua Glenn’s exhaustive and idiosyncratic history of ‘zines. You can find it by Googling “Regression towards the zine.” It is on the website he runs, Hilobrow.com. In ‘Zine Joshua Glenn is known as Josh, a moody sociology student. In Glenn’s taxonomy, the ‘zine is a descendant of the pamphlet. It is also interrelated, but different, from similar media forms. ‘Zines shouldn’t be confused with science fiction fanzines or “little magazines” (Partisan Review, Paris Review, etc.) ‘Zines also existed in a variety of formats, from hand-assembled xeroxed affairs like “Pagan’s Head” to larger glossy-covered pop culture artifacts like Glenn’s own ‘zine “Hermenaut.” Don’t let the DIY aesthetic fool you. Glenn would call that “authenticity-mongering.” When asked by a mainstream journalist what a ‘zine is, Glenn replied, “It is a periodical I would like to read.” Publishing a ‘zine means an intentionally niche audience (this isn’t Time or Newsweek) and total creative control over content. Kind of like a blog …

What’s a hipster? You’ll find the hipsters Kennedy hung around with to be of a different variety than the Williamsburg type. Taking a cue from Joshua Glenn’s idiosyncratic periodicity for his project on American generations, I’m going to split the “hipster-type” into four waves. The First Wave Hipsters flourished in the Twenties and Thirties. Think of the hep cats and Cab Calloway. The Second Wave Hipsters built upon the first, embodied in the Beat Generation of the Forties and Fifties: bebop, Beatnik literature, drugs. (Later co-opted into the caricature of Maynard G. Krebs.) The Third Wave Hipsters came from a hippy tradition (itself a descendant of Allen Ginsburg’s ideas in the Beat Generation). These Third Wavers were politically vocal, ambivalent about pop culture, and had career malaise. The Third Wave existed roughly from the mid-Eighties to the mid-Nineties. It finally disintegrated after Johnny Carson retired from The Tonight Show and American monoculture slowly began to fragment from the effects of a publicly available Internet. The Fourth Wave Hipsters came about in the early 21st Century, but have turned inward: becoming aesthetic obscurantists and perpetual reactionaries. In addition to liking pop culture beneath a seething dollop of irony, they pride themselves in liking bands before they were cool. (Granted, I may be making this into a caricature.)

Back to Allston in the latter years of the Reagan Administration. Pagan Kennedy worked as a freelance writer for such publications as PC Week and The Village Voice Literary Supplement. What’s fascinating to note is how Kennedy’s status as a writer is the opposite of where many writers find themselves today. She wrote in prestigious publications, eventually had a literary agent, and busied herself by attempting to write the Great American Novel. (Unlike today, where everybody and their mom has a blog. Not only that, a blog is seen as a means to getting into The Big Show, meaning, legitimate journalism.) But novel writing had left Kennedy feeling bored and fake. She wrote her novel with the aim of publication in The Atlantic Monthly or The New Yorker as the goal. But that meant imitating the style of John Updike and writing about slightly bored upper-middle-class white people from Westchester, New York.

It’s a good thing Kennedy got bored, since that motivated her to put together (literally) “Pagan’s Head.” Written as a kind of middle finger salute to the entrenched literary establishment, “Pagan’s Head” gloried in pop culture, personal confession, and misfit inventories. It even accrued a fan base. In her ‘zine, Kennedy told of her unironic love for The Partridge Family, but simultaneously deconstructed why she loved it so much.

In addition to pop culture, “Pagan’s Head” gives the reader helpful information on Allston-area thrift stores and her kitschy adventures on multiple road trips to the American South. There’s opinion columns, letters to the editor, and comix. We read about her love for the Knoxville World’s Fairgrounds and the Sunsphere. (Although more probably know it from that one Simpson‘s episode where Bart and his friends visit the Wig-sphere.) One of my favorite stories was about her trip to New York. As an aside she talks about the bathrooms of leftist magazines.

“And as you might expect, the bathroom at The Nation is significantly more shabby than at the Voice. The Nation‘s bathroom is the type where the mirror has fallen down and forever after remains propped against the wall, as if it’s about to be fixed; the graffiti tends towards quotes from Fourier. In general, there’s an atmosphere that says, “Hey, we’re in this bathroom meditating on social injustices in Sudan, not the peeling paint.”

“Meanwhile, the bathroom at the Voice is institutional and inelegant, but clean. The graffiti tends towards slogans, gossip, and conspiracy theories. “Feminine” pads and tampons are provided free! There is an atmosphere of no-frills comfort that says, “All people — male and female, gay or straight, white or black — are equally entitled to a decent bathroom experience!”

Throughout its run, “Pagan’s Head” allowed Kennedy to create a version of herself as media persona. She used it to shield herself from the grief she experienced when her father died from cancer. Later, she let the mask slide a little bit when she detailed her experiences when she had ovarian cancer. She expressed her fears, confusion, and dismay at the medical establishment in a heart-wrenching comic.

The ‘zine finally petered out with the arrival of the publicly available Internet in 1996. Immediate availability of information, chatrooms, discussion boards, and free blogging software made the ‘zine obsolete. Now with the Internet approaching its twentieth year, it has become easier and easier to connect with people and/or fall down the rabbit hole of information overload. ‘Zine is a wonderful snapshot of how people detailed their pop culture obsessions and connected with fellow misfits in the pre-Internet days. Today Pagan Kennedy is a columnist at The New York Times Magazine, the by-word for mainstream journalism.

But the ‘zine lives on on the Internet: Roadsideamerica.com used to be a ‘zine and Hilobrow.com had its beginnings as a ‘zine. Donna Kossy, author of Kooks and Strange Creations, had her start in ‘zines and was Pagan Kennedy’s roommate.

Bonus: Did you know there’s a connection between CCLaP and the Allston hipsters? Michael McInnis used to run The Primal Plunge in the Allston Mall. It carried all manner of ‘zines. Then McInnis moved to Chicago to found Quimby’s. Jason Pettus, founder of CCLaP, wrote reviews for Quimby’s magazine-book catalog hybrid. Then the Internet happened, which made the catalog irrelevant. Then CCLaP happened …