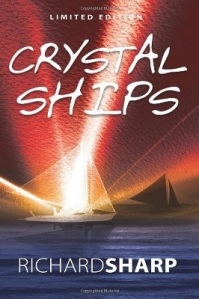 Crystal Ships, the latest novel by Richard Sharp, is dedicated to “the survivors of America’s decades of discontent.” It is the chronicle of America from the Kennedy years to the malaise of the Seventies. While the title may sound familiar to those who know “The Crystal Ship,” by the Doors, it also takes its inspiration from an earlier Irish poem. The novel begins in Boston with Shane, his younger brother Connor, and their friend Gil Gardner. Gil wrote a poem entitled “Crystal Ships,” and he debates with the brothers about its significance. Gil and Shane attend Harvard and Connor saw service with the Navy. The guys eventually meet some girls, Camila and Lucy. Lucy Funaro is an aspiring dance student who comes from a family with Italian-Jewish heritage. Camila Benenati is her friend who tries to get Lucy out of trouble. Added to the mix is Lucy’s conservative brother Ira, a career military man working as an adviser in Vietnam, and his wife Ava, involved in real estate.

Despite the potential to overdetermine the characters into simple types, Sharp manages to make every character seem real and lived-in. The Ivy Leaguers have debates about poetry and drugs and Ira has his tirades about hippies and liberals. Their lives change when forced to deal with tragedy. Connor dies over the skies of Vietnam. The death scene is neither gratuitous or glorifying. One of the more macabre aspects is how routine the death seemed. But it does bring home the horrors and the nightly body counts broadcast on TV. Another aspect is Ira’s unswerving belief that Vietnam could be won, even as he complains about strategic blunders. He firmly holds this belief up until the very end. It mirrors Ira’s accusations that the left is naive and ignorant of the global situation.

The novel spans the globe from Boston to Oakland to Vietnam to South Africa. Working with the USIS program, Gil travels to South Africa. He meets Balinda, a South African hoping to abolish the apartheid system. Balinda’s opposition is more daring because of the dubious nature of her legal status as a white. Her experiences with apartheid contrasts with Gil’s headstrong attempts to fight against American segregation.

Throughout the novel, the characters work diligently to change the system. Or in the case of Ira, to preserve the system. What changes did happen involved long struggle and clashes that sometimes ended in death. It is hard to look back on this historical era without a tinge of Hobbesian practicality. Even with the best ideals, changing a society involves both passing legislation and enforcing it. It took a very long time for American society to do either when it came to civil rights. While it is easy to idealize and mythologize the Sixties, it is much harder to burrow beneath the ideals to see the everyday struggle, suffering, and death that came in its wake. Crystal Ships tells a story about those who wanted to change things. It also tells a story of those who survived the process.