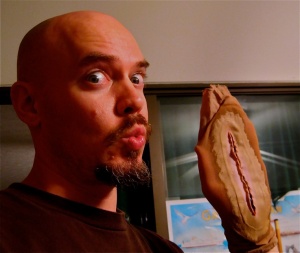 Over at the Chicago Center for Literature and Photography, Sloughing Off the Rot received my pick for Best Bizarro Literature Book for 2013.  I talk with the author, Reverend Lance Carbuncle, about the book’s inspiration, his work schedule, and blumpkins.  Seriously, what’s with those things?

Where did the idea for Sloughing Off the Rot come from?

Sometimes it’s hard to say where my ideas come from. Mostly my stories are something that kind of just pops into my head and I say, “hey, that’s a cool story.” Then I have to let them fester in my brain for a while before I commit to putting them down on the page. Some of the ideas that come to me don’t develop into anything worth working on further. I just need to think them through for a while to see if I really want to pursue them or not. I think that is what happened with SOTR [Sloughing Off the Rot — Ed.]. I probably was lucid dreaming and woke up with the idea, and months later I started fleshing it out.

How do things like pop culture and religious play into your writings?

The pop culture aspect of my writings is pretty simple. I think I have been profoundly affected by shows like The Simpsons and Mystery Science Theater. I remember hearing a writer from one of those two shows say something to the effect of if only one person catches the obscure reference, then it’s worth it. I kind of feel that way with the pop culture references that I make.

Also, if there is a book or song or movie that has had a significant effect on my, I love tipping my hat to them in some way in my stories.   I did that in a huge way with Of Mice and Men for my second novel, Grundish and Askew.

As for the religious, I am not a religious person at all. But, I do find religions and their philosophies and attempts to assign deeper meaning to our actions and lives fascinating. Not long before I wrote Sloughing Off the Rot, I read the entire King James Bible. I did this not because I was searching for some meaning or guidance in my own life, but because the Bible has had such a profound affect on our history, laws, literature, and day-to-day lives. I felt that I would be remiss to not read the entire document (and yeah, I even read all of the boring genealogies of Jesus with all of the so-and-so begat so-and-sos). And though many things I read in the bible were puzzling to me (why does god feel the need to spell out how I should compensate a man if I kill his beast of burden? Why would Lot, the most righteous man in Sodom, be willing to offer his daugthers up for gang rape in order to protect two strangers? What is this –and I’m not kidding, see Job 39: 9-12   –   about unicorns?), I also found that the bible had some incredible language and imagery. Much of imagery, wording, and concepts from the KJB found its way nicely into Sloughing Off the Rot.

How did you come up with the idea for the blumpkins?

Ah, the blumpkins. The breast-covered fuckballs. Those are very polarizing as far as the reactions my readers have had to them. Some people have commented that they want blumpkins (one suggesting blumpkin action figures). My wife called them gross. One review noted that they were “objectifying.”

There are times when I write something and I have to ask, “is this going too far?” The section with the blumpkins was such a time. But, I knew that the protaganist, John, was essentially being punished for his past-life actions and that some of his greatest sins were against women. Therefore, as a sort of punishment, the strange land in which he found himself was to be populated only by males. In other words, due to John’s past mistreatment of women, he was to be deprived of the company of the fairer sex. But, still, there had to be some explanation for how John and other characters in the book (i.e., the Chellovecks) were able to reproduce. Thus, the blumpkins.

What’s your creative work schedule like? Any particular effective habits that make you a productive writer?

When I decide that I have something to write, I have to make a real commitment to it. I write daily for at least an hour (usually during my lunch break at my grown-up job). I don’t outline my stories too much, other than to figure out a general sketch of where I think the story is going to go. Then it’s ass-in-chair-and-write time. I point the story in the direction I think it is going to go, and then let it take over. For the most part, I find that the story goes in directions that I did not expect when the idea originally came to me. And, for the most part, the new directions that my work takes during the process are better than I originally imagined. And then I edit the shit out of whatever I have written. I try to file down all the rough edges, toss out (or at least give a new twist to) the clichés that somehow find their way into my story, and get rid of the stuff that (even though I probably love it) just doesn’t really fit. I run my stories by a few people whose opinions I respect and seek input. Then I polish up the turd that I have written and throw it at the public.

Who are some of your favorite writers?

First, I will throw these names at you: Twain, Vonnegut, Steinbeck, King, Kerouac. Also, I’d like to give props to independent authors whom I enjoy such as David David Katzman, Brian Alan Ellis, Michael Hansen, Anderson Prunty, Kirk Jones. I like mentioning independent and small press authors because I think that is where there are a lot of fresh and creative ideas. Small press and self-published authors get a bad rap sometimes because there is a lot of horrendous self-pubbed crap out there.   But the DIY ethic can also lead to some very creative and entertaining stuff that would never be printed by a publishing company whose goal is simply profit. And, when it’s done right, by somebody who gives a shit about what they are putting out, the results can be very satisfying.
When you’re not writing, what are you usually doing?

I have four youngish kids that take up most of my free time. Despite what people might surmise if they read my books, I am actually very family-oriented. I work a day job that I actually enjoy most of the time. Otherwise, I play hockey (badly) and try to travel when I find that I can afford to schlep my brood to somewhere cool.

Any specific creative projects you’re working on at the moment?

I just recently began writing again. I took some time off after I pushed SOTR out of the nest. I usually need a good year to clear my head after seeing a book all the way through to publication. This next one is something of a horror/bully/revenge story. I’m really only a few thousand words into it, so it likely won’t be out until some time next year.

Do you have any final words of wisdom?

I’ve got nothing, so I’ll leave you with some of Homer Simpson’s advice: “If something goes wrong at the plant, blame the guy who can’t speak English.”

One thought on “The Lance Carbuncle Interview”