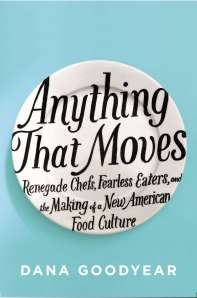 Anything That Moves: Renegade Chefs, Fearless Eaters, and the Making of a New American Food Culture
By Dana Goodyear
Riverhead/Penguin
Reviewed by Karl Wolff

My introduction to food writing began with Anthony Bourdain’s Kitchen Confidential. But it began before that, with Trimalchio’s lavish banquet described in The Satyricon and the gustatory decadence of Des Essientes in Against Nature. Writing about food is challenging, since it is a sensual and immediate experience. (Look at how both wine snobs and Guy Fieri are mocked in pop culture. Wine snobs radiate an insufferable pretentiousness, especially to those who have no palate for the grape stuff. And, well, Guy Fieri is probably the Antichrist.) Even among the countless foodies and Yelp reviewers, there are extremist cadres in American food culture. What does extreme mean? It means seeking out the culinary fringes, including noshing on things that are taboo, disgusting, or illegal.

Dana Goodyear investigates different strands of extremist food culture in her book, Anything That Moves: Renegade Chefs, Fearless Eaters, and the Making of a New American Food Culture. Coming from Minnesota and with specific food allergies, I was immediately interested in what Goodyear had to say about the outlier foodies and chefs. Since I can’t eat shrimp, I can eat clams, oysters, and squid. I’ve graduated from enjoying venison in season to hunting down providers of sweetbreads (aka organ meat). And, before I leap off the confessional soap-box, I think foie gras and raw milk cheese should be legal. In the end, I found that even my idiosyncratic tastes and personal foodie crusades are nothing compared to the extremists she interviews.

The wonderful thing about Anything That Moves is its range of subject material. There is legendary food writer Jonathan Gold hunting down the obscure and the possibly lethal in Los Angeles, ranging from food trucks to Chinese restaurants with questionable kitchen practices. There are the slow food libertarians who see the FDA as a bureaucracy just as evil as the NSA and the IRS. And there are the Las Vegas chefs, preparing rare and opulent dishes for high rollers. Surrounded by bone-stripping desert heat, these chefs have the challenge of transporting fresh produce and seafood over long distances. One chef compared prepping food for Las Vegas with colonizing the moon. (The extreme climate and geographic isolation are comparative.) There are also extreme eaters, seeking out illegal food at clandestine restaurants. If there’s a way to eat whale meat, they will find a way.

Beyond the extremism element, Goodyear brings up salient points in terms of food politics. She spends a considerable amount of time conversing with entophagists. These proponents of eating insects have a reasonable point. When deforestation, overfishing, and industrial farming has created a crisis situation with meat, there have to be other ways to consume protein. One alternative is to eat bugs. At first blush, it is seen as gross. Then again, lobster and shrimp both belong to the same massive group of arthropods. It may be a while before eating grasshoppers and ants are commonplace, but if American ingenuity is involved, the gateway will probably be adding the elements chocolate and bacon. Deep fry the sucker and one only has to wait a short while before there are stampedes at state fairs.

The hunt for alternate protein sources leads to the concept of what we will eat and why. Many food prohibitions are based on religious tradition. Others are inherited from our modernized culture. The raw food crusaders advocate drinking raw milk. While there is increased risk of diseases present in raw milk, this seems more like a quibble that calls for some legislative reform and a more small-business-friendly attitude from the FDA. Other raw food fanatics consider the best organic eggs are the ones with the most chicken feces on them. Um … ewww. One has to draw a line somewhere. That’s my redline. It turns out to be not that surprising that there is overlap between the raw food purists and Ron Paul libertarians.

Anything That Moves is a fascinating exploration of the limits of American food culture. Issues like ethics, legislation, and popular taste are covered with in-depth interviews and Dana Goodyear’s crackerjack writing style.