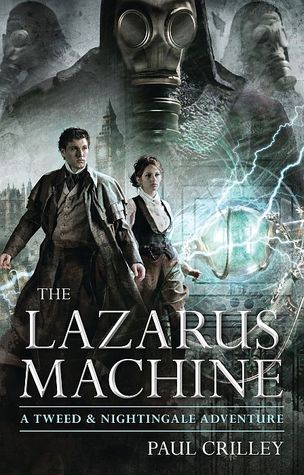 Set in an alternate 1895, Paul Crilley’s steampunk actioner, The Lazarus Machine: a Tweed & Nightingale Adventure has a Victorian London filled with steam-powered omnibuses, automatons with human souls, and a paranoid government agency calling itself the Ministry. Sebastian Tweed earns a living through faking encounters from the afterlife, aiding his conman father Barnaby Tweed. When Moriarty’s gang abducts his father, he needs to find help. He eventually meets up with Octavia Nightingale, aka Songbird, a savvy information broker whose mother, a London Times reporter was abducted a year ago. Crilley creates an inventive steampunk setting, rife with conspiracies, medical experiments gone awry, and a potentially explosive international incident involving the possible assassination of Queen Victoria. The repartee between Sebastian and Octavia is smart and funny, reminiscent of dialogue in an episode of Buffy the Vampire Slayer and the back-and-forth Pete and Myka have in Warehouse 13. A humorist once said how steampunk was like “cyberpunk minus the social relevance.” The Lazarus Machine deals with issues like soul harvesting, human cloning, abuse of political power, and class divisions. Luckily Crilley, while writing for a younger audience, makes the whole affair rather fun and without needing to resort to using the mallet of moralizing preferred by afterschool specials.