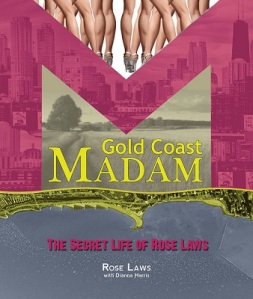 Growing up in abject poverty in Tennessee, Rose Laws endured countless obstacles on her way to success. She struggled to stay in school despite family tragedies, escaped the Tennessee backwoods through marriage. Then the marriage turned abusive and she had her children taken away to different orphanages. All this is prologue in Gold Coast Madam: the secret life of Rose Laws, by Rose Laws with Dianna Harris.

Laws fought to get her children back, discovering along the way her ability to nurture connections and to provide the movers and shakers of Chicago with, shall we say, entertainment. While it sounds salacious, Laws chronicles her dealings with the police, maintaining a hotel property, and issues with clients and girls. Despite these obstacles, it seems like everyone enjoyed Laws’s girls. These individuals included members of organized crime, politicians, actors, sports figures, and, of course, the very wealthy.

Gold Coast Madam boasts a lot of stories about sex, but it also an unlikely primer about class in America. Laws finds financial success in an illegal business, thriving in a marginalized culture akin to women succeeding in sideshows, burlesque, and roller derby. Nature abhors a vacuum and, by the same token, people will go where the money is. Unlike “streetwalkers” who solicit johns at cheap rates in sketchy neighborhoods, Laws facilitated meetings between her girls and johns. Instead of street corners, the girls meet the johns at a predetermined meeting space, usually a hotel that Laws owned, and paid upwards of $400 an hour. Laws operated out of Chicago’s prestigious Lake Point Towers until a sensational bust in 2002 when her property was raided by the FBI.

A note about the ratings below: It isn’t often that I’ve rated a book with such a wild disparity in numbers. The lower number is for the general reader. I rated it rather low because, despite its fascinating content, the writing is pedestrian and flat. That said, Rose Laws isn’t a professional writer and not an acolyte of Gordon Lish’s “cult of the sentence.” But Gold Coast Madam represents a boon to readers interested in Chicago history, women’s history, and other diverse topics, including class, gender relations, sex work, and the urban/rural divide. Laws isn’t a professional writer, but the fact she wrote down her life story is invaluable to researchers, historians, and specialists searching for first-hand testimony. Historians, like lawyers, are always searching for evidence. This evidence comes in two flavors: primary documents (like this book, first-hand accounts, letters, etc.) and second documents (monographs, academic texts, history book, oral history collections, etc.). One builds a secondary document from either one or many primary documents. When confronted with a lurid assertion, allegations of international conspiracy, or an unpopular interpretation of a well-known event, I leave you with this nugget: Consider the source. Who said it? When did he or she say it? What evidence does he or she have to support their claims? Is cherry picking involved? Does the author’s bias distort or edify the interpretation? And these questions breed more questions until the evidence is picked clean like a carcass in desert.

To sum things up, Rose Laws isn’t a great writer, so don’t plan on picking this up on a whim. If you’re interested in Chicago history, especially its seamy side, make sure to read Gold Coast Madam.

Out of 10/6.0 for general readers; 8.5 for fans of Chicago history, the history of prostitution, and those seeking firsthand accounts of the sex industry.