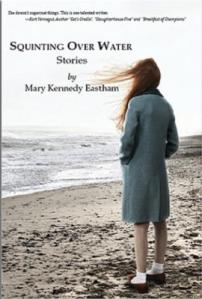 Since Mary Kennedy Eastham is a longtime friend of mine, I will state that this will not be an objective disinterested review. This bias shouldn’t overshadow the merits of Squinting Over Water, Eastham’s latest short story collection. The self-published story collection presents a diverse array of stories, from short short stories to longer narrative works. The short stories represent another aspect of Eastham’s literary repertoire. Having previously reviewed her poetry, I found the short stories containing the same qualities. The short short stories read prose poems, beautiful image fragments that resonate in the reader’s imagination. The longer stories vary in style from realistic to fantastical. Eastham has a way of drawing back the everyday reality to reveal a mysterious, occasionally vicious underbelly.

The stand out story in the collection is “Delicato.” In the story, Johanna Dane searches for her brother, Mica, lost in a flood that has ravaged the small town of Dane’s Crossing. The siblings lost their parents to a fire years ago and Johanna faces the possibility of losing Mica. The flood is depicted in almost Sadean terms, a relentless, apathetic Mother Nature destroying everything in its path. Amidst the carnage, Eastham populates Dane’s Crossing with memorable characters like the Tobacco Sisters and Parisfal, mayor and mystic of the town. Eastham balances an almost-magical realism with the Proustian apocalyptic. It is Proustian because she reminisces about Mica and her family while she is swimming or boating frantically to find Mica in the flooded town. The story avoids becoming twee or precious by its unsentimental core. The quirky characters face very real destruction from the flood. Its power is never sugarcoated.

In contrast to “Delicato,” is “Destiny of Joy.” In the story, Andy and Eddy watch planes landing at the local airport. Their derelict surroundings include a cardboard box and plastic chairs stolen from a homeless shelter. The conversation is fragmentary and ambiguous. We don’t know for sure, if these kids are homeless or just hanging out for an afternoon. It is never really explained. Does it need to be? This story captures Eastham’s poetic imagination. Only a couple pages long, it is ambiguous and vibrant, yet written with a subtle economy. Not a word is wasted in its telling. Even with its prose poem style, the characters still feel lived-in and real. We seem to recognize Andy and Eddy.

Squinting Over Water has more stories like the ones previously mentioned. In them, characters deal with loss and its consequences. But even with that commonality, the stories radiate joy and hope. Eastham will be adding a novella to her diverse writing. Despite my obvious bias, I highly recommend this book to those looking for a new twist on the short story.