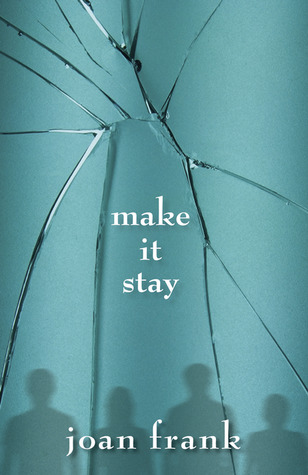 Make It Stay by Joan Frank is a brief literary gem. The novel focuses on the lives of two couples, the upper middle class Neil and Rae and the more blue collar Mike and Tilda. The novel opens with Neil and Ray preparing dinner, awaiting the arrival of Mike and Tilda. Neil works as a lawyer representing immigrant workers exploited by the owners of local California wineries. Rae works as a writer. Mike, a longtime friend of Neil’s, owns a fish store, while Tilda bounces from one dead-end job to another. Set in California Wine Country, the novel chronicles friendships, affairs, disaster, and fragmentation. As families grow and marriages shatter, we see the Northern California town of Mira Flores transform from an isolated backwater to a gentrified tourist trap.

The opening scene presents a kind of double refraction. Neil tells the story of how he met Mike while Rae re-imagines it in her mind. The novel presents Rae as a harshly judgmental bitch, especially in terms of Mike and Tilda. She does not look highly on their messy household, their economically downscale status, and Mike’s extramarital carousing. The judgmental attitude gives her narration a sharpened edge. It reveals the underlying condescension and smugness with an otherwise typical upper middle class liberal couple. It reveals more about the narrator than about the other couple.

Joan Frank’s writing combines a lush sensuality with a taut verbal precision. The novel covers decades and we see relationships merge and break apart, all within less than 150 pages. A nice counterexample to all those doorstoppers and the alleged profundity couched within several hundred pages. One can almost smell food as it’s made. We see Mike and Tilda’s daughter, Addie, grow up and start a family of her own. In one sentence, Frank captures the emotional and physical strain heaped upon new parents:

“Both parents felt as though they were being pounded systematically by some gigantic mortar and pestle, pounded day and night until they’d been rendered into something whey-like, a byproduct with neither wits nor will.”

Without being too spoilery, in later parts of the novel we learn about Tilda’s background, with Rae’s judgmental attitude checkmated. Tilda becomes less of a demonic caricature, offensive to Rae’s upper middle class sensibilities and prejudices. The novel is a pitch-perfect blend of meticulously wrought sentences that support a slowly unraveling narrative of Northern California life. This is by far the best novel I’ve read all year, something the board members and jury of the Pulitzer Prize missed entirely, shortlisting the usual suspects and awarding the Prize for Fiction to no one this year. One can only hope the National Book Award will see beyond the insular confines of Manhattan and give Joan Frank a national literary prize well deserving of her talents.

One final caveat: I’m giving this book a high rating for the reasons I listed above, but this is a literary novel and is written as such. Those looking for more genre-oriented fare would probably not enjoy it as much as I did.