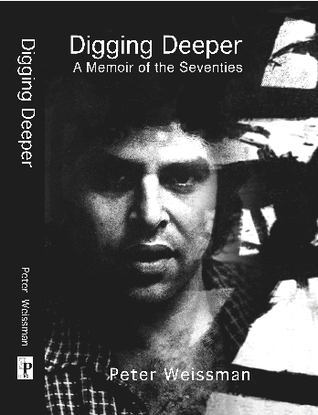 Peter Weissman’s I Think, Therefore Who Am I? took place during the Summer of Love.  It was an intimate exploration of the Sixties, the most glorified or vilified decade in recent history, depending on how far one lives from Real America™ (patent pending).  His second volume of memoirs, Digging Deeper: a Memoir of the Seventies, chronicles Weissman’s life during a decade not liked by anyone, except perhaps the occasional roaming hipster burnishing his or her sense of ironic superiority.

The memoir begins with Weissman crawling from the muck of hallucinogenic incoherence.  Weissman’s inability to speak to others provides a dark comedic undertone to the opening chapters.  Through willpower and workplace demands, Weissman transitions from an introverted state brought about by his extensive experimentation with drugs.  One of Weissman’s first jobs is for a marketing research firm.  Verbal connections established through the short-term exchanges he has over the phone.

While working he meets Noreen again (she appeared in his previous volume of memoirs).  She helps Weissman in his reintegration to society.  Then, like clockwork, the pair become a couple and then a married couple.  One of the underlying themes in Digging Deeper is negotiating with “Normal Society.”  Weissman, a Red Diaper Baby, faces additional challenges, since the Sixties weren’t simply an extended vacation by rich college kids to take lots of drugs and sleep around (at least according to historians siding with the conservative victors).  The Sixties brought with it a revolutionary promise.  The promise remained unfulfilled, resulting in the cavalcade of characters Weissman profiles in Digging Deeper.  He works with disgruntled Postal Service employees, dines with wannabe artists, and spiritual con artists.  Realizing the revolution has been lost or simply co-opted, Weissman chronicles these engagements and negotiations with a detached precision leavened with cynical observations.

Weissman and Noreen eventually move to the Bay Area.  He works at the Post Office with a multiracial work force, including a patchwork of black and white supervisors and managers reflecting the explosive calculus of affirmative action.  The Post Office scenes have the flavor of Barney Miller-meet-the Wire, where race, class, and capital expose the fissures of the socioeconomic system in its latter years of global dominance.  The sequence where he delivers mail to wealthy patrons of an apartment complex is especially cutting, the shrill spoiled scions of money old and new sounding like the entitled dingbats from Arrested Development.  (For added irony, Noreen is the daughter of a major chemical magnate.  The magnate prides himself in his part in developing napalm, one of Vietnam’s more horrifying legacies.)  However, Weissman’s rage against the capitalist machine isn’t exactly pure.  Unable to work on his writing, supporting his wife, and dealing with the frustrations of everyday coalesce into his need to get a hobby.  That hobby is horseracing.

I Think, Therefore Who Am I? gave a street-level view of adolescent exploration during the Summer of Love.  Digging Deeper expands on that vision, examining a decade rather than a year, and showing the travails of growing up.  Forced from the Eden of psychedelic visions and personal experimentation, Weissman has to perform that alchemical miracle of turning sweat into greenbacks.

2 thoughts on “Digging Deeper: A Memoir of the Seventies, by Peter Weissman”