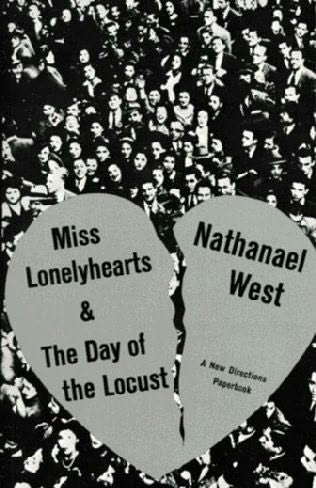 The short tragic life of Nathanael West produced four novels.  Dying penniless and alone, West bequeathed a literary legacy that has reverberated in the works of Alexander Theroux and Thomas Pynchon.  The two works collected here, “Miss Lonelyhearts,” a long short story, and The Day of the Locust, a novella; offer the reader a sampling of West’s scathing apocalyptic satire.  In little over 180 pages, the reader encounters ferocious black humor, hard-boiled surrealism, and apocalyptic visions.  Nathanael West belongs to the family of innovative literary Modernists like T.S. Eliot, Samuel Beckett, and William Faulkner.

“Miss Lonelyhearts” is a story about an advice columnist tap-dancing on the edge of existential despair.  The short story, for all its bleakness, ferocious satire, and visionary set pieces, runs only 58 pages in my New Directions paperback.  Written in 1933, the short story recreates the psychological depression crushing the nation.  The desolate psychology mirrors the economic situation, the lack of money, options, and hope coloring the letters sent to Miss Lonelyhearts.

Miss Lonelyhearts, a hard-drinking male writer with lapsed religious convictions, writes the so-called “agony column” for the New York Post-Dispatch.  He tries to deal with the problems of the writers in a genuine sincere way, but harassment by his boss, the crass editor named Shrike, undercuts his ability to his job.  The passive-aggressive workplace relationship also occurs in Alexander Theroux’s sprawling, capacious, encyclopedic satire of modern American life, Laura Warholic, or the Sexual Intellectual.  Shrike throws out different solutions: art, religion, and sex.

West writes with verve and power, pushing the reader closer and closer to the brink of despair.  While the humor is black and vicious, it gives respite from the letters, each a tiny ingot of suffering and misspelling.  “And on most days he received more than thirty letters, all of them alike, stamped from the dough of suffering with a heart-shaped cookie knife.”  He describes a sad little park where “It had taken all the brutality of July to torture a few green spikes through the exhausted dirt.”  After a night of drinking, Miss Lonelyhearts takes a bath, “but his heart remained a congealed lump of icy fat.”  “Miss Lonelyhearts” reads like His Girl Friday if Samuel Beckett wrote the script.

The dark speakeasies and disreputable rags of New York City give way to sunny days and visions of apocalypse in The Day of the Locust.  Written in 1939, the title refers to the plague from the Book of Exodus.  The short novel traces the misadventures of Tod Hackett, a background painter, and the losers, extras, and has-beens who populate Hollywood, America’s pop cultural capital.  He pines for Faye Greener, a glamorous extra.  He deals with her father, a former vaudevillian, and Homer Simpson, a former accountant convalescing in California’s balmy climate.  There’s also cowboys, Mexicans, and a cantankerous midget named Abe Kusich.

Even though the novel is over seventy years old, the Hollywood of the Great Depression bears a striking resemblance to the Hollywood of the Great Recession.  Tod journeys around Hollywood collecting material for a painting called “The Burning of Los Angeles.”  It is a vision of fire and apocalypse.  West, along with Thomas Pynchon in The Crying of Lot 49 and Vineland, sees California as a place where paradise and the apocalypse mingle.  Tod meets child stars and their crazy showbiz mothers.  The mother Tod meets is a raw food advocate.  There are hostesses of discrete prostitution rings and movie moguls living in mansions of kitschy architectural splendor.  He visits the “Tabernacle of the Third Coming” which teaches “a crazy jumble of dietary rules, economics, and Biblical threats.”  The combination sounds disturbingly modern, especially given the self-parody of political discourse in the United States.  Reading Nathanael West makes one aware that apocalypse may be just around the corner, but it may also be darkly funny.