Years of experience has brought with it a fondness for the demanding read.  My reading selections are promiscuous, omnivorous, and ecumenical.  I’m an enthusiast for the Modern, the Experimental, and the Unclassifiable.  I also enjoy reading space fantasy novels published by the Black Library.  As a critic, I enjoy plumbing the depths of pop culture, high culture, and places in between.

I recently finished Laura Warholic by Alexander Theroux.  An encyclopedic magnum opus about love, lust, sex, democracy, and spirituality, the novel overflowed with references to high and low culture.  Some chapters read like encyclopedia entries, closer to essays than narrative.  Theroux’s linguistic acrobatics matched his boundless energy and outrage at the current state of affairs for the United States, the world, and humanity in general.  The dust jacket summary calls the novel “maximalist.”  The Fantagraphics hardcover I own runs 878 pages of small print.  Theroux also boasts a vocabulary and knowledge as intimidating as Will Self.  Caveat emptor.

“What can I say?  He looked like Evan Dando of the Lemonheads.  Très slanky,” explained Laura who, in spite of it all, insisted all along she wanted to be with Eyestones.  How could anyone ever trust such a person, he wondered, even if he loved her?  After she had moved down from Newburyport to Cambridge other names were mentioned.  He once saw her talking to a black man, a quop-nosed goon in a porkpie hat, unshaven, with a batik handkerchief tied round his head.  Was this Jamm the Wesort, the person whom she had several times alluded with no further clarification, except to say she had met him in some night-school art class in which she said she was enrolled?  Other names and shadowy figures mentioned but who she claimed were only acquaintances were Dave, Lamont, Dan.  She referred to men as “snacks,” their penises as “beer cans,” their company “jive time.” And yet for all her efforts men always ignored her after being with her once or twice and never called back.  Over time, he had learned, even worse, that she had had at least one abortion, maybe more, and diseases like retroflexio uteri and myoma and ovarian tumors.  She seemed to be offering almost to wrest it from craven cowardice a kind of information-warfare that, even if defiant, carried in its frankness what absolved her – what she hoped would absolve her – from deceit.  Still, it was all rather like the low expectation of no longer existing in, by, with, or for someone, anyone, whom she might love.  Listening to her, Eyestones wondered what ever happened to the power of profundity of love, the long-lost world, say, of Tasso’s Jerusalem Delivered when the beautiful Syrian, Erminia, who desperately in love with Tancred and finding him fallen in combat, cuts off her hair to staunch the bleeding?  It was a world of from which Laura, suffering so, self-excluded herself.  Oh but she knew she was right.  Thank you, trollop.

The paragraph reads like a short story, nearly self-contained and propelled by a narrative drive.  The numerous references (Evan Dando, retroflexio uteri, Jerusalem Delivered, quop-nosed, etc.) place demands on the reader.  How many readers would get both the references to the band the Lemonheads and the plot of Jerusalem Delivered?  It is no wonder twenty years separate Laura Warholic from Theroux’s last novel, An Adultery. 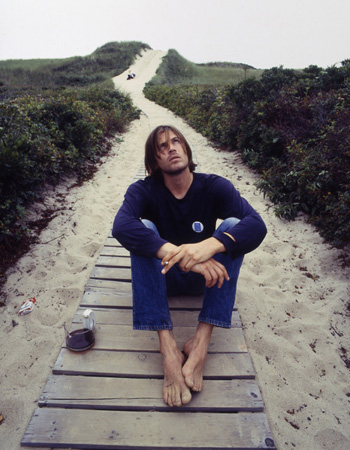 While the novel is demanding in its linguistic and cultural references, the narrative itself follows a straightforward arc.  Digressions, rants, monologues, essays, fables, and other devices throw the narrative off course, but the narrative itself is easy enough to grasp.  The novel, distilled down to its ur-narrative, is a love story.  In this way, Theroux approaches the torment and damnation of the lovers found Graham Greene’s novels.

On the opposite pole, far from Alexander Theroux’s satirical maximalism, is the novel How It Is by Samuel Beckett.  Written in 1961, originally in French, translated by the author, the book has three chapters and covers only 147 pages.  Following the tour de force of the Trilogy (Molloy, Malone Dies, the Unnamable), Beckett continues in his quest to strip writing (and by extension, fictional narrative) down to its basic elements.  How It Is involves a narrator meeting Pim, carrying tins in a sack, and being submerged in mud.  The usual descriptors for Beckett apply here: surreal, absurd, symbolic, bleak, tramps, and minimal.

Unlike the paragraph from Laura Warholic, long and bursting with references high and low, driven forward with narrative energy and verbal acrobatics, How It Is comes across as ambiguous and inert.  Eraserhead in print.

The reader must figure out where each thought ends and where the next begins.  The lack of punctuation demands the reader pay attention.  This becomes challenging because the narration encompasses attributes working against each other.  The text becomes self-defeating and self-destructive.  The narrator seems unable to finish a coherent thought or is easily distracted.  The paragraph is both a run-on sentence and a series of fragments.  Allusive and opaque, linear and circular, minimal and expansive, the prose represents a slow-motion freeze-frame of Barthes’s famous Death of the Author.  But who is the author?  Where is the author?  What is the author doing?  The reader can never be sure, although there are many compelling theories.  The prose itself offers no final and definitive clues.

In the end, How It Is shows a speaker, at once powerless and downtrodden, combating the imminent defeat of negation by talking.  Talking and talking and talking, even if the talk lacks narrative sense.  The talking is a “stain upon the silence,” to quote Beckett.  It is what every writer wants to do.  To leave something that is more permanent than ourselves.  “O, that this too too solid flesh would melt / Thaw and resolve itself into a dew!”  Hamlet said.

One thought on “Critic’s Notebook: A Demanding Read, Part I (Fiction)”