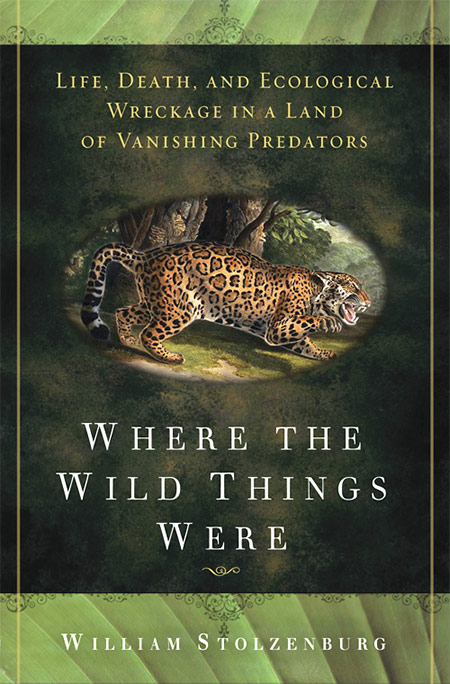 On the tip of Washington’s Olympic Peninsula, ecology professor Robert T. Paine threw starfish into the sea.  In Alaska, killer whales preyed on sea otters.  In the northern forests of Wisconsin, massive deer herds mowed down several species of wildflower.  What do these disparate actions have in common?  In Where the Wild Things Were: life, death, and ecological wreckage in a land of vanishing predators, author and nature columnist William Stolzenburg explores what happens when top-tier predators go extinct.  Discussing several case studies, ranging from the tiny starfish to the polar bear-eating killer whale, Stolzenburg shows the ecological devastation following top-tier predator extinction.

When Robert T. Paine threw the Pisaster starfish into the sea, in an experiment of daring simplicity, his discovery illustrated the dangers involved with a trophic cascade.  In layman’s terms, with the predatory Pisaster gone, mussels soon overran the rock pool Paine used for his experiment.  Anyone who has read about invasive species like the Zebra mussel and the Snakehead will understand the situation.

Stolzenburg’s book illustrates the dilemma posed by the white-tailed deer.  With the removal of the wolf, coyote, and bear, the deer population has boomed to astronomical levels.  Like the mussels overrunning the smaller organisms in the rock pool, the deer have acted like a massive lawnmower, clear-cutting endangered wildflower species.  This becomes a serious problem in the US National Park system, where tourism dollars and photogenic elk herds clash.  What do park administrators do?  In these days of lowered budgets, every tourist dollar counts.  But at what cost?  Preservation of endangered species versus maintenance of the bottom line become the new battleground.

In a recent ad for Timberland boots, the tag line reads: “If you’re not fast, you’re food.”  The book also highlights that the removal of top-tier predators from the ecosystem also removes the prey’s instinctive fear.  Luckily, once predators were re-introduced into Yellowstone, the natural “fear factor” of the elk population soon returned.

Where the Wild Things Were is a marvelous book, well-written, and filled with exciting passages.  Stolzenburg makes discussions of academic theories and passages of predators hunting prey contain the same measure of thrills.  This is popular science writing at its best.