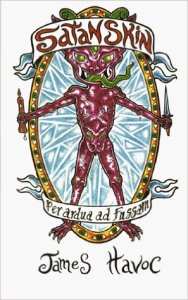 The butcher, a superstitious soul, often fancied he had seen faery lanterns dancing atop that hill. Loins piled high with lean steak, beady mind’s eye pressed hard to a knot-hole in some mythic childhood fence, he would lie on the chopping-block imagining orgies of lesbian flower-dwellers: tiny, whip-cracking winged dominatrices in slugskin catsuits gyrating over grave-slabs lit up by blazing petals, which eunuch elfin held aloft trophies of carious, grown-up molars; borne on a warm wind, slivers of sad, charred melody. Tears would flow from the butcher’s eyes then, mingling with the cords of drool upon his ample chins, as he gently wept in the shadow of spinning, strung-up heifers shod in shiny vinyl boots.

From “The Venus Eye”

A misanthrope since birth, when the delivering midwife proclaimed his left clavicle to display the contours of a shark-eating dahlia, Nightingale spent his boyhood years attempting to change himself into animal shapes. One day crouching and snuffling in a baffled badger’s set, the next racing crabs sideways across silty river-beds, he spent endless summers in vain pursuit of this miraculous conversion. In the cool of the night he would retreat to his favourite hideaway, an ancient tree nurtured on the blood and bones from a burial mound for mediaeval rapists. There, reposing on a crest of obliterated mica, rubbing his shins together like a cicada or lowing like a moonstruck cow, he began to formulate revenge on Nature; unable to reform, he vowed to become corruptor.

From “The Tears Tree”

More than a dozen of the creatures were already in the shack, squirming in every nook, the floorboards carpeted with inflorescent genitalia and viscera; the air visibly stagnant, almost opaque, bouyant with miraculous, unglimpsed hues. And Williamson, doyen of this mutant microcosm, leering over the fawning inmates.

From “The Colour Hell”